Canadian and US ‘assistance’ in Haiti, another invasion under the guise of assistance 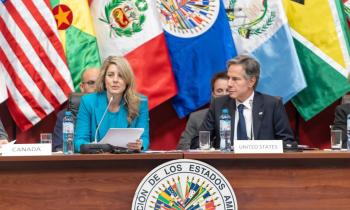 Canadian foreign minister Mélanie Joly leads a meeting about Haiti, speaking beside US Secretary of State Anthony Blinken (Image Credit: US Mission to the OAS)

Canadian and US military aircrafts landed in Haiti to deliver military equipment to the Haitian national police, on October 15, 2022. These aircrafts were preceded by the arrival of the US national coast guard in Haitian waters three days earlier. How can such foreign military presence in Haiti be justified in terms of international law? Some have answered that question by pointing out that the Haitian government itself has asked for military intervention. But here’s the problem: That request for a foreign military presence in Haiti is illegal, because article 236.1 of the Haitian constitution clearly forbids the presence of a foreign army on Haitian soil. The illegality of the request is all the more evident when one considers that there is no legitimate government in Haiti.

De-facto Prime Minister Ariel Henry is a member of the PHTK party founded by former fraudulently elected president Michel Martelly. The PHTK has engaged in the looting of public funds, the dispossession of Haitian Farmers and in State-sanctioned massacres according to an April 2021 report from the International Human Rights Clinic of the Harvard Law School. Henry was named by Jovenel Moïse, also a fraudulently elected president whose mandate had expired for months when he was assassinated on July 7, 2021. Former president Michel Martelly and Ariel Henry are both suspected of involvement in Moise’s murder. Henry has been acting as Prime Minister of Haiti since July of 2021 and owes his designation to that function to the Core group, a coalition of foreign ambassadors (with representatives of the US, Canada, France, Spain, Germany, Brazil, UN and OAS) that have been effectively running Haiti’s affairs (from behind selected puppets) since the overthrow of democratically elected Jean Bertrand Aristide in 2004. Although Henry still enjoys the support of the Core group, he was never approved as Prime Minister by the Haitian parliament as required by the Haitian constitution.

Ignoring constitutional and legal considerations, on October 9, UN secretary-general Antonio Gutteres responded to Ariel Henry’s request for a military intervention by submitting to the Security Council a letter with options for enhanced security support to Haiti. A meeting of the UN Security Council took place on October 17 to discuss that letter and the question of Haiti. In anticipation of that Security Council meeting, the editorial board of the Washington Post decided to jump ahead and publish an opinion piece welcoming an upcoming international military intervention in Haiti. After implying that this force would help foster democracy in the country, the piece acknowledges that such a prospect is not to be taken lightly given the history of the MINUSTAH, the last UN-led intervention force. MINUSTAH started in 2004 and ended in 2017 after a series of extra judicial killings, sexual abuse scandals and the introduction of a cholera epidemic in the country.

What the Washington Post editorial board fails to mention is that, at the moment, there already is a UN presence in Haiti called the BINUH. That UN office in Haiti has been there since 2019 with  the mandate to assist the Haitian government towards implementing democratic reforms. There has been criticism of the BINUH for its perceived support of the PHTK party and contested president Joevenel before his assassination. Prior to the failures of the MINUSTAH and the BINUH in Haiti, there have been at least eight previous international peacekeeping missions that have utterly failed to bring about democracy in Haiti. UN soldiers have been accused of raping, repressing and even killing innocent Haitian civilians.

This arrogant tendency to ignore the root causes of Haitian protests is reflected in the Globe and Mail's recent publication of an opinion piece calling for Haiti to be put under UN control, that can best be summarized as a prime example of what white savior complex is all about.

In an interview with France 24, Haitian economist Camille Chalmers explained that foreign interventions have aggravated the societal crisis in Haiti by weakening state institutions and increasing the country’s dependency on foreign entities. He described the calls for foreign intervention as an instrumentalization of the latest upheaval on the streets of Haiti. In Chalmers view, these calls aim to legitimize autocratic and foreign powers in Haiti. What remains of the Haitian Senate have asked for Ariel Henry’s request to be deferred. Several organisations including union members and ex-soldiers of the Haitian Army have described Ariel’s Henry’s request as high treason. Activist groups in the Caribbean nation have denounced the request and have called for popular mobilization against the de facto government and against foreign interference. Protestors on the streets of several major Haitian cities carry «Down with the Core Group» signs. The BSA, members of the follow up committee of the Montana accord group that has been working on drafting Haitian solutions to the social, political and economic woes of the country have condemned Ariel Henry’s request for foreign military intervention as unconstitutional.

Undeterred by Haitian opposition to the help they insist on offering, the Canadian Minister of Foreign Affairs, the Canadian Minister of National Defence, the U.S. Secretary of State and the U.S. Secretary of Defense have issued a joint statement on October 15 that provides the following explanation about their military presence in Haiti on that day:

“Canadian and U.S. military aircraft arrived in Port-au-Prince, Haiti to transfer vital Haitian government-purchased security equipment, including tactical and armored vehicles, and supplies to the Director General of the Haitian National Police (HNP). The delivery of the equipment was part of a joint operation involving Royal Canadian Air Force and U.S. Air Force aircraft.”

“This equipment will assist the HNP in their fight against criminal actors who are fomenting violence and disrupting the flow of critically-needed humanitarian assistance, hindering efforts to halt the spread of cholera.”

Following that joint statement, Canadian Prime Minister Justin Trudeau tweeted that the US and Canada are committed to supporting the Haitian national police and both countries will  “continue to support the restoration of security in Haiti” . But what has been the result of US and Canadian support so far? The US has a very long and grim history of interfering in Haitian affairs. Most Haitians are well aware of the US occupation that lasted from 1915 to 1934 which similarly to today’s events followed the killing of a Haitian head of state, President Vilbrun Guillaume Sam. That 19 years-long US occupation resulted in the theft of Haiti's entire national gold reserve by Citybank and the deaths of thousands of Haitians. It also ended democratic aspirations under the US-backed regime. Although Canada’s involvement in Haiti is much more recent than the US, in regards to the stated goals of restoring security or democracy, it has also proven to be disastrous.

From the Ottawa initiative on Haiti in 2003 up until now, Canadian foreign policy towards Haiti has been set to undermine the Black nation’s sovereignty. There is an embrace of the racist view that Haitians are unable to govern themselves. The Canadian mainstream media tends to assimilate popular uprisings to gang violence. They have failed to report that most Haitian people have been protesting against the neoliberal policies of the International Monetary Fund that have prompted the Haitian government to cancel fuel subsidies and raise gas prices.  The Canadian government has built prisons in Haiti from which prisoners have repeatedly escaped. They’ve funded and trained the Haitian national police that has been accused of shooting peaceful protesters and of massacres in the poor neighbourhoods of La Saline and Bel-Air. Why does the Trudeau government want to continue down that path?

Very few Canadian journalists have investigated or reported on the failures of Canadian involvement in Haiti. There is also a resounding silence about the role of Canadian mining companies, in the exploitation of Haiti’s workers and pillaging of Haiti’s natural resources. Canadians who want to find out what is going on in Haiti right now will be misled if their only sources of information are US and Canadian mainstream media. For the past few days, the main talking points that pass for news about Haiti have been about “gang violence” and about “calls for international intervention to help Haiti”. These talking points are misleading because they obscure a certain number of embarrassing facts about Canada’s role in the ever-increased violence Haitians have been enduring in the past decades. A well-informed Canadian public would undoubtedly conclude that foreign interventions are a problem, not a solution in Haiti and all members of the Core group, starting with Canada and the United-States, should get out of Haiti.

Jennie-Laure Sully is a member of The Canada Files' Advisory Board. Sully is a community organiser at La CLES, a support center for sexually exploited women and girls. After studying anthropology and public health, Sully obtained a master’s degree in biomedical sciences from the University of Montreal. Sully has also worked as a research coordinator in hospitals and as a psychosocial caseworker in a rape crisis center.  She has written for The Monitor, Le journal des Alternatives and Nouveaux Cahiers du Socialisme.