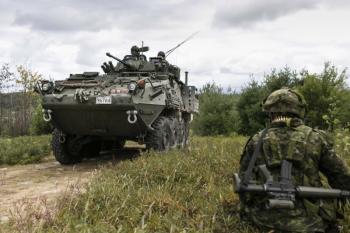 Recently released data quantifying Canada’s 2021 exports of military goods mark the continuation of a disturbing trend in the Trudeau government: the consistent growth of arms sales, including to some of the most repressive states abroad.

Since Justin Trudeau took office in 2015, Canadian global arms sales have risen every year, with the sole exception of 2020, whose total was still “at least double that of almost all years between 1978 and 2017.” While 2020 was a low for the Trudeau government, it remains Canada’s third-highest year for military exports on record. The only two years in which Canada sold more arms abroad also occurred under the Trudeau government: 2018 (over $2 billion) and 2019 (almost $4 billion).

According to the Stockholm International Peace Research Institute, Canada is the 17th largest exporter of military goods in the world, with most going to the United States and Saudi Arabia. Nevertheless, Canada continues to cling to its false image as a global peacekeeper, even though Canadian peacekeeping contributions to the United Nations are less than one percent of the total—a contribution that is surpassed by both Russia and China, two countries with a threatening and militaristic presence in the mind of most Canadians.

In 2021, the largest non-US buyer of Canadian arms continued to be Saudi Arabia, which has used Canadian-made weapons in its brutal offensive against Yemen for years. This means that Saudi Arabia has been the second-largest buyer of Canadian military goods for ten years in a row, with sales spiking under Trudeau.

In 2020, the Trudeau government approved sales to the kingdom totalling $1.3 billion. In 2021, that total jumped to $1.7 billion, meaning that the Trudeau government chose to increase Canada’s arms sales to Saudi Arabia by $400 million while the kingdom continued its horrific bombing campaigns against Yemen, which have killed hundreds of thousands of people since 2014.

In 2020, Canada sold about $25 million in weapons to the United Arab Emirates, another belligerent in the war on Yemen. Those exports fell to $3 million in 2021, but that drop was more than counteracted by the $400 million increase in military sales to the Saudis.

Meanwhile, Canadian arms sales to apartheid Israel are currently at a 30-year high and climbing every year. Like Saudi Arabia, Canada’s military exports to Israel increased by over 30 percent in 2021. The Trudeau government made the decision to approve these sales during the apartheid state’s internationally condemned 11-day bombing campaign against Gaza, which killed hundreds of Palestinians and wounded thousands.

Over $6 million of the weaponry that Canada sold to Israel last year was classified as “explosives or related components.” About $10 million was related to Israel’s space program and “military aircraft,” while almost $7 million went to a category “which may include weapon sights, bombing computers, or target acquisition components.” The fact that Canada exported notable volumes of aircraft technology, bombs, and targeting equipment to Israel during the 11-day bombing campaign against Gaza has caused Canadians for Justice and Peace in the Middle East to note that “Canadian-made weapons or components could have been used in Israel’s military offensives in Gaza, including airstrikes on residential targets which may amount to war crimes.”

Other states which saw significant increases in Canadian arms inflows courtesy of Trudeau include Indonesia ($8 million in 2020 to $10 million), Kazakhstan ($44,000 to $6 million), and Morocco, which is currently occupying Western Sahara, the last formal colony in Africa and a former hub of Canadian potash investment ($750,000 to $22 million). European states also shipped in tens of millions in Canadian weaponry, as did Japan, whose purchases rose from $42 million in value in 2020 to $280 million in 2021.

Not only do these arms sales far overshadow Canadian peacekeeping contributions and foreign development programs—they completely undermine the false image of benevolence that the Canadian government astutely crafted for itself in the Cold War context. Even though Canadian peacekeeping initiatives were always politicized in their goals and implementation, they served as the basis of an international marketing campaign that branded Canada as the peaceful and considerate antithesis to the aggressive and militarist US. Now, with peacekeeping contributions embarrassingly low and arms sales rising every year, even that flimsy justification no longer exists.