Canadian corporations are suing developing countries for billions of dollars 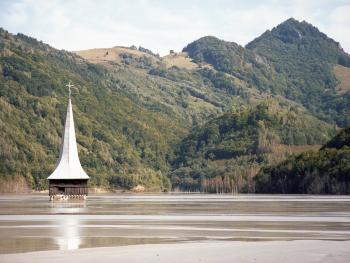 Geamana village drowned in toxic water tainted with cyanide and other chemicals from a copper mine opened in the 1970s, near where Canadian company Gabriel Resources wants to extract gold. Photo by Michal Janček on Flickr

Canada is the most sued country in NAFTA—a troubling fact that has resurfaced since Canada, the United States and Mexico began renegotiating the trade deal last year.

A report published by the Canadian Centre for Policy Alternatives (CCPA) earlier this year shows that Canada has paid more than $219 million in damages and settlements to U.S. investors. And with eight cases currently pending, Canada could be on the hook for an additional $475 million.

The legal mechanism that allows companies to sue governments is called investor state dispute settlement (ISDS) and it can be found in dozens of other trade agreements that Canada has with other countries. It has been criticized for being an insular, opaque world where lawyers serve as judges one day and represent clients the next.

And while Canada has been on the receiving end of ISDS claims, Canadian companies aren’t shy about using them either. Research by National Observer shows that Canadian companies have successfully sued governments for at least US$2 billion in damages since 2009, and they’re seeking nearly US$10.5 billion in cases that are currently pending, nearly all of which target developing countries.

In fact, Canadian companies have sued foreign governments at least 60 times over the last 20 years. This tactic is especially popular among Canadian mining companies, which are responsible for almost 60 per cent of new ISDS cases since since 2009, and represent all of the successful cases brought against governments thus far.

“The lawsuits that Canada has seen under NAFTA are a mirror of what Canadian resource companies have been launching abroad,” says Trew. Canadians should care about the effects that these cases have on democratic rights regardless of where they happen, he says. “Around the world, people are facing the same challenges when opposing unwanted, highly polluting resource projects.”

A chilling effect on environmental regulation

According to Stuart Trew, a researcher with the CCPA, more than half of the claims brought against Canada under NAFTA challenge environmental and resource management decisions, leading him to wonder if these lawsuits might have a chilling effect on environmental regulation and democratic rights.

In 2008, a Delaware-based gravel company called Bilcon sued Canada after it rejected a quarry project in Digby Neck, Nova Scotia. Bilcon wanted to mine basalt rock over a period of 50 years, crush it and then ship it through the Bay of Fundy to New Jersey where it would be mixed into roads. A federal-provincial joint review panel rejected the project in 2007 based on the danger it posed to Nova Scotia’s environment, specifically the endangered right whales that live in the area.

A panel of judges declared that Canada had “arbitrarily” rejected the project based on the advice of the environmental review panel. The company claims the decision was discriminatory, and is seeking $500 million in damages from Canada. A tribunal began hearings in February to determine how much Canada should pay.

Todd Weiler, a Canadian lawyer who has worked in investment arbitration for 20 years says ISDS is good for development because countries can attract more investment by offering additional protections to companies. “It’s in the interest of the host country to ensure that they offer a level of legal security that is commensurate with the risk that’s involved,” says Weiler.

“There wouldn’t be successful cases brought against Canada under NAFTA if there weren’t problems here,” he says.

But Howard Mann, a senior law advisor at the Winnipeg-based International Institute for Sustainable Development, says ISDS cases can impede sustainable development, especially when governments are already struggling to pay the bills. “If governments are paying billions of dollars to settle claims, they’re not spending it on education, health or local infrastructure.”

Romania, for example, is facing a US$4.4 billion claim from Toronto-based mining company, Gabriel Resources. If the company wins the full amount, it would equal half the country’s annual health budget and more than two percent of its gross domestic product in 2017.

Critics said the gold mine would have been an environmental disaster for Romania. The tentative plan involved flattening four mountaintops, turning a nearby valley into a tailings dam that would hold thousands of tonnes of cyanide, destroying nearby villages and ruining 2,000-year-old mining galleries.

Approval of the project sparked mass protests in 2013--the largest the country had seen since its 1989 revolution. The government officially withdrew its support the following year. In 2017, the incoming socialist government submitted Rosia Montana as a Unesco World Heritage Site, effectively killing the project.

The company has said that it complied with Romanian and EU legal requirements and its assets were expropriated illegally by Romania. Hearings are expected to begin in September 2019. Gabriel Resources was reached for comment, but did not respond before publication.

In the meantime, the company’s legal bills are being covered by a Wall Street hedge fund called Tenor Capital Management, which will receive a piece of the reward if the company wins its case. Tenor also paid for Crystallex International Corporation, a Toronto-based mining company, to settle a $1.2-billion case with the Venezuelan government last year. The hedge fund received 35 per cent from that case, a 1,000 percent return on the US$36 million it invested in the legal proceedings, according to a report by Corporate Europe Observatory, a research group based in Brussels.

Burford Capital, another company that funds arbitration cases, has seen “an explosion in demand from clients around the world,” according to a story in the The Financial Times earlier this month. Growing interest in arbitration more than double the company’s net profit last year to US$265 million, and the company says it has recovered a record US$362 million from arbitration cases.

The Corporate Europe Observatory report says these external funding arrangements “allow companies like Gabriel to draw out legal fights,” which raises the cost of arbitration for governments and increases the chance that they will settle. States can’t secure the same external funding because they don’t stand to win awards from ISDS. In fact, governments only lose money from ISDS: they can either win and pay legal fees or lose and pay damages.

“Countries are trying to use their natural resource base to develop in a way that is inclusive and equitable, and these arbitrations have a major impact on the ability of governments to do that,” says Mann. Rather than using ISDS as a tool of last resort, Canadian companies are using it to “push back” against countries changing regulations, says Mann. They’re using it “not as a shield, but as a sword.”