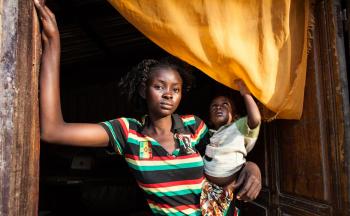 Six Canadian officers deployed to Haiti have been found by the UN to have engaged in sexual misconduct. (Andres Martinez Casares/Reuters)

When the United Nations launched an investigation into the allegation that a Canadian peacekeeper had sexually assaulted a Haitian woman in early 2013, the file landed on the desk of Rob Hotston.

Hotston was an investigator with the UN mission in Haiti, and looking into allegations of sexual exploitation by UN employees was one of his top priorities.

According to the allegation, the peacekeeper had picked up a local sex worker. "There had been a conflict between the two of them, during the course of which he had actually threatened her with his UN-issued firearm," Hotston recalled.

Hotston said the woman fled from the vehicle the officer was in, which also belonged to the UN, but in the process, she managed to grab his badge — which is how he was identified as a Canadian peacekeeper. Hotston said she ran to a nearby house asking for help. The residents called the police, who passed the information along to the UN.

The ID badge led the investigators to an officer who had been recruited by the RCMP from the Sûreté du Québec for the peacekeeping mission in Haiti. The officer was in the middle of his deployment at the time, but after Hotston opened the investigation at the UN, the officer left Haiti — without informing the RCMP or the UN.

A few weeks later, Hotston concluded that the Canadian police officer had engaged in sexual exploitation, thus violating the terms of his peacekeeping mission. Hotston delivered his findings to the UN, which passed the information on to Canada.

What happened next reveals how difficult it can be to hold officers to account once they're back in Canada, and why it's a pattern that has frustrated the UN.

CBC News obtained hundreds of pages of internal documents, memos and emails from Global Affairs Canada that confirm six officers deployed to Haiti have been found by the UN to have engaged in sexual misconduct.

The documents also reveal that often, there are meek or, in some cases, no consequences for Canadian officers who violate both the RCMP and the UN's rules of sexual misconduct while deployed abroad.

"It's just an absolute outrage that the way the system is set up allows injustice to flourish," said Kaila Mintz, who spent years as a foreign service officer with the Canadian government and now works with Code Blue, an organization that aims to end sexual exploitation and abuse by UN peacekeeping personnel.

"No Canadians should be above the law when it comes to sexual offences, especially Canadians working for the United Nations."

The documents also show that Canada's handling of these cases has led to tensions between the UN and the Canadian government over what the UN sees as Canada's lack of transparency and lax treatment of peacekeepers accused of sexual misconduct in Haiti.

Officers meant to 'maintain the peace'

Canadian police officers are currently operating as peacekeepers in countries such as Ukraine, Mali and Iraq. Canada has sent 625 peacekeepers to Haiti since 2011.

The RCMP oversees the program, called the Canadian Police Arrangement, but it also draws on roughly 30 provincial and municipal police forces around the country to staff the missions.

Under the program, the rules around sexual relations with anyone in the local community are unequivocal.

In a statement to CBC, the RCMP noted it "strictly prohibits intimate or sexual relationships with members of the local population, due to the difference in real or perceived power and authority." Before a deployment, each Canadian officer must read the rules and sign that they understand them.

"We're sending [peacekeepers] to maintain the peace and protect the local population suffering from … civil conflict or other conditions that have made life very very difficult for them," said Sylvain Roy, a senior policy advisor with the UN. "We're not sending them to engage in romantic relations."

When the UN finds credible information that a peacekeeper violated the terms of their employment, it shares those findings with Canada. If the officer isn't a member of the RCMP, the Mounties pass the information to the local Canadian police force that supplied the officer. The onus is then on that police force to conduct the investigation and render disciplinary measures.

The layering of responsibility appears to provide little accountability for how the police forces deal with incidents such as these.

Rob Hotston's findings about the Sûreté du Québec officer were passed on to the RCMP, which in turn would have submitted them to the Sûreté du Québec. But the Global Affairs emails state that the "officer avoided accountability with police service by retiring (case closed)."

The RCMP wouldn't comment on the case, and said it was up to individual police forces to impose any sanctions. Reached for comment by CBC, the Sûreté du Québec responded via email, only confirming that the officer "is retired from our service."

The emails received by Global Affairs contain many redactions, and do not include the names of the Canadian peacekeepers, but noted that in two of the six cases, memos show the officers retired prior to their disciplinary hearing.

Documents also reveal that two of the six cases resulted in the Canadian officer fathering a child. (CBC spoke to a Haitian woman who had a child with one of these officers. She did not want to be named, but she said that her son is picked on at school for his biracial appearance. The kids have nicknamed him "Minustah" — the name of the UN mission in Haiti.)

One memo reviewed by CBC reveals Canadian officials have been aware for years that there's a "gap" in the Criminal Code of Canada. Unlike a public service employee, a police officer deployed as a peacekeeper who commits sexual assault while abroad can't be charged in Canada.  The exceptions are an offence that constitutes a war crime or involves a minor.

When asked about this gap in the Criminal Code, Canadian Foreign Affairs Minister Chrystia Freeland said "it is totally unacceptable for [officers] to harm the people who they are sent to protect. And it is important for us to be sure that we have a framework here in Canada that allows us to deal with any offenses committed outside the country."

Freeland said, "the problem you've identified is real and we need to find ways to address it."

Rob Hotston is calling on Canada to change its Criminal Code to treat peacekeepers as "public servants," so they would "face the same consequences."

The UN's Sylvain Roy said "Canada could decide to pass legislation that would make the conduct of its employees or people who are provided to the UN ... susceptible to criminal prosecution if that conduct amounts to a crime in Canada."

The documents reviewed by CBC also provide a glimpse of how behind closed doors, Canada's handling of the six cases of sexual exploitation have strained its relationship with the UN — especially following the latest case.

In March 2017, a Canadian peacekeeping officer from Quebec's Ville de Saguenay Police was accused of sexual misconduct. The email exchange between Canadian officials in Ottawa noted that the officer was "observed having sexual intercourse with a Haitian citizen. A UN investigation ensued with the investigation concluding that the member had engaged in an exploitive [sic] sexual relationship with the local citizen."

Documents reveal that a week after the initial incident occurred, investigators at the UN spoke to the officer in question for the first time. Shortly after, Canadian authorities flew him home, effectively putting him out of reach of UN investigators.

The move wasn't well received. In one email, a Global Affairs staff writes, "[t]he UN has expressed concern to Canada that the officer was repatriated before it completed its full administrative investigation."

One Global Affairs memo notes, "The UN indicated it considers the matter unresolved given that the prompt repatriation of the officer did not allow for the completion of the UN administrative investigation. The UN has requested that the officer in question be made available for further interviews or that Canadian authorities complete the investigation and inform the UN of its outcome."

But Canada dragged its feet. One document notes the limitation of Canada's reach in such cases: "The RCMP and the officer's home police service may not be able to compel the officer to participate in further interview."

Records show that more than a year after the officer was repatriated, Canada had yet to share with the UN if any disciplinary measures were meted out against the officer.

An email from Global Affairs staff goes on to state, "The UN has raised concerns regarding the sharing of information from Canada on investigations and disciplinary measures."

The UN's Sylvain Roy told CBC, "we want the individual to remain available to us to conduct in our investigation before they're repatriated."

A memo briefing Public Safety Minister Ralph Goodale sums up the latest case by saying it "may have an adverse impact on Canada's international image and spawn negative media attention."

Roy said regardless of how Canada disciplines the officer in question, one thing is clear: "This individual is never going to come back to peacekeeping or the UN."

While the names of the officers and the police force are redacted, Global Affairs documents reveal the "sanctions" the six police officers received:

In the sixth case, RCMP faced intense pressure from the UN for repatriating the officer before a final investigation was completed. Ville de Saguenay Police concluded the only sanction the officer would be given was a letter placed in his file. Following that, the documents show the RCMP suspended the entire force from the peacekeeping program.

When CBC reached out to the Ville de Saguenay Police for comment, the police department first wrote back saying, "Since this is not a public matter, unfortunately we cannot give you any information."

A week later, however, the police force informed CBC that it has received new information on the case and decided to reopen its two-and-a-half-year-old investigation.

RCMP Insp. Sean Auld, who at one point oversaw the peacekeeping program, said "we are disappointed by any member that doesn't meet our high standards. But I would like, if possible, that we remember the fantastic work that our peacekeepers have done as well."

The RCMP told CBC that it is in the process of revising its deployment agreement with officers and their police forces in hopes of being able to share Canada's findings with the UN in a more timely manner in the future.

"I feel very strongly that there is a need for change," said Hotston about the overall way the investigations are handled. "The people who I really feel sorry for are the actual victims, because they are  left in the lurch. They are forgotten."