Canadian military training in Africa is extension of US imperialism 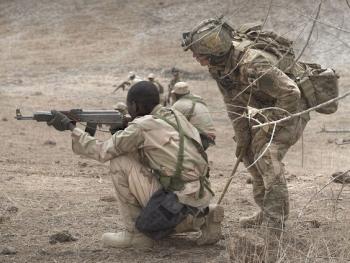 Which is more believable as motivation to send soldiers to other countries, altruism or self-interest?

Canadian forces don’t train their African counterparts out of a commitment to professionalism or democracy but to extend this country’s influence.

Recently the Ottawa Citizen reported that Canadian special forces will continue to participate in “U.S.-led training exercises despite links to instructing troops who have been involved in two separate military uprisings in Mali. Malian soldiers forced the resignation of the country’s President Ibrahim Boubacar Keita after they launched a coup on Aug. 18. Coup leader Col. Assimi Goita, as well as many of the soldiers who took part in the uprising, had received training at the U.S.-led annual Flintlock military exercises which involves western special forces providing counter-terrorism training to African units. A former army officer has now taken over as president in Mali and Goita has declared himself vice president.”

The Canadian Special Operations Regiment (CSOR) has participated in Exercise Flintlock since 2011. Sponsored by the US Africa Command (AFRICOM) and directed by the Joint Chiefs of Staff, Flintlock takes place in a different nation of the Sahel region of northern Africa each year. “Although Flintlock is considered an exercise, it is really an extension of ongoing training, engagement, and operations that help prepare our close Africa partners in the fight against extremism and the enemies that threaten peace, stability, and regional security,” said the commander of the US Joint Special Operations Task Force-Trans Sahel, Colonel Kenneth Sipperly, during Flintlock 2014.

In addition to Flintlock, Canadian forces have trained thousands of African military personnel in recent years in a variety of forums and countries across the continent. Hundreds of African soldiers have also come to train in Canada through the Military Training Assistance Program (MTAP).

Canadian officials generally tell the media the aim of training other militaries is to help fight terror or the illicit drug trade but a closer look at military doctrine suggests broader strategic and geopolitical motivations. An important objective is to strengthen foreign militaries’ capacity to operate in tandem with Canadian and/or NATO forces. According to Canada’s MTAP, its “language training improves communication between NATO and other armed forces” and its “professional development and staff training enhances other countries compatibility with the CF.” At a broader level MTAP states its training “serves to achieve influence in areas of strategic interest to Canada. … Canadian diplomatic and military representatives find it considerably easier to gain access and exert influence in countries with a core group of Canadian-trained professional military leaders.”

When Canada initiated post-independence military training missions in Africa a memo to cabinet ministers described the political value of training foreign military officers. It stated: “Military leaders in many developing countries, if they do not actually form the government, frequently wield much more power and influence domestically than is the case in the majority of western democratic nations … [It] would seem in Canada’s general interest on broad foreign policy grounds to keep open the possibility of exercising a constructive influence on the men who often will form the political elite in developing countries, by continuing to provide training places for officers in our military institutions where they receive not only technical military training but are also exposed to Canadian values and attitudes.”

As part of Canada’s post British rule aid efforts, Canadian troops trained armed forces in various African countries in the 1960s. In Ghana, Nigeria, Zambia and Tanzania, Canada endeavoured “to fill in the vacuum left by the withdrawal of British officers and training facilities,” notes Professor Robert Matthews. Military historian Sean Maloney further explains: “These teams consisted of regular army officers who, at the ‘operational level,’ trained military personnel of these new Commonwealth countries to increase their professionalism. The strategic function, particularly of the 83-man team in Tanzania, was to maintain a Western presence to counter Soviet and Chinese bloc political and military influence.”

After Ghana won its independence the CF organized and oversaw a Junior Staff Officers course and took up a number of top positions in the Ghanaian Ministry of Defence. In the words of Canada’s military attaché to Ghana, Colonel Desmond Deane-Freeman, the Canadians in these positions imparted “our way of thinking”. Celebrating the influence of “our way of thinking”, High Commissioner McGaughey wrote the undersecretary of external affairs in 1965 that “since independence, it [Ghana’s military] has changed in outlook, perhaps less than any other institution. It is still equipped with Western arms and although essentially non-political, is Western oriented.”

When today’s internal documents are made available, they will likely show that Canadian military training initiatives continue to influence the continent’s politics in ways that run counter to most Africans’ interests.