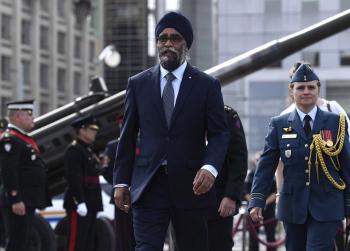 The Ottawa Citizen’s David Pugliese recently exposed how the Canadian military was secretly working to establish a propaganda division to influence Canadians’ political views. This disturbing revelation shows how far the Canadian ruling class is willing to go to maintain power.

What propagandizing has the military gotten up to recently?

In 2015, a plan was approved to weaponize public affairs and covertly propagandize Canadian citizens. Liberal Defence Minister Harjit Sajjan approved said initiative upon coming into office, along with an additional expansion of military propaganda capabilities for multiple units. Under his leadership, the government’s 2017 defence strategy policy called for Canada’s military to “become more involved in propaganda and information warfare.”

The Ottawa Citizen previously reported that, in July, the military had come up with a propaganda campaign to prevent civil disobedience during the COVID pandemic. According to Pugliese, “That campaign was to use similar propaganda tactics to those employed against the Afghan population during the war in Afghanistan, including loudspeaker trucks to transmit government messages.”

The military secretly monitored and collected information from Ontarians’ social media accounts, particularly comments made about the Ford government’s failure to protect elderly citizens in care homes. The military then handed that data over to the Ford government, with no clear indication on what was done with it.

Recently, the military even conducted a propaganda training mission where they forged letters from the Nova Scotia government  claiming that wolves were wandering across the province.

Retired and serving military and DND public affairs staff also share information about journalists in an invitation-only Facebook page. This page is officially supported by the DND and was created with Sajjan’s full awareness.

So what is this propaganda division & what’s happening now?

The military recently spent more than $1 million to “train public affairs officers on behaviour modification techniques of the same sort used by the parent firm of Cambridge Analytica.”

While Minister Sajjan responded to public revelations of this division’s creation by saying the unit wouldn’t be created, a series of town halls were already conducted last week for a number of military personnel on the strategies contained in the draft plan.

This propaganda division has real echoes of a primitive COINTELPRO, the FBI-led program set up in 1956 to destroy the new left. Just as the Canadian military has been extremely reluctant to combat its deep white-supremacist infiltration problem, the FBI refused to act against hate groups such as the KKK until President Lynden Johnson demanded this of them.

The Canadian military’s botched letter campaign has echoes of the FBI’s constant usage of anonymous or forged letters to cause dissent and factionalism within the left. The FBI used these letters campaign in an attempt to smear the Black Panther Party as being anti-semitic, to harass the Puerto Rican independence movement to the point that its leader died of a heart attack, and much more.

The media played a role in spreading false stories created by the FBI that were meant to smear supporters or members of new left groups. Famous actress Jane Seberg was falsely accused that her unborn baby was a result of an affair with a Black Panther in retaliation for her donations to and support for the party. The fake story was run uncritically by the LA Times and Newsweek. Years later, she committed suicide, with the story being cited as a definitive factor.

For more info on COINTELPRO, you can read this extensive piece on Jacobin.

Considering the right-wing state of Canadian media, there is little doubt that mainstream outlets would lap up false stories developed by the military. While there have been no successful attempts yet, at least that we know of, the military is already working to collaborate with retired senior military staff and military-friendly academics to push out pro-military messages in their interviews or panel appearances in the news media.

Brigadier General Jay Janzen’s statement that “The motto ‘who dares, wins’ is as applicable to strategic communication as it is to warfare,” is a disturbing one. It indicates that the social media tactics are just the very beginning of the military’s propaganda campaigns. Given the military’s white-supremacist connections, there is no doubt that said propaganda efforts will be targeted against the Canadian left, rather than right-wing extremists like the anti-maskers or Qanon supporters who marched in Quebec.

While the effort has seemingly been delayed, the Canadian left must be hyper-vigilant against this imminent psy-op threat. Disturbingly, the only leftist media in Canada which covered Pugliese’s discovery was a Youtuber, Jason Unruhe. Other than this, the left media seems to feel naively secure about the present situation.

This is the primitive form of a Canadian COINTELPRO, and must be ruthlessly targeted as such. Anything less will be self-sabotage of the highest order.