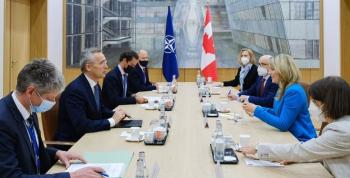 A coalition of Canadian peace groups and civil society organizations is calling on the federal government to de-escalate any potential conflict between Russia and NATO over Ukraine.

“We want demilitarization and de-escalation of this current crisis,” said Lorincz.

CFPI describes itself as a non-partisan organization that seeks to “inform people living in Canada about the country’s diplomatic, aid, intelligence, trade and military policies abroad.”

Russian President Vladimir Putin has positioned 100,000 troops in areas close to the Ukrainian border, but Putin’s Deputy Foreign Minister Sergei Ryabkov declared "There are no plans or intentions to attack Ukraine” after talks with U.S. officials earlier this month. However, speculation about a coming conflict remains.

On Monday, The Globe and Mail reported that NATO was putting military forces on standby in Eastern Europe, a move denounced by Russia as escalating the crisis.

Ukraine is not currently a NATO member, and Russia has repeatedly insisted that the country and Georgia (which both neighbour Russia) should not be allowed to join the military alliance, and that NATO forces be pulled back from countries in Eastern Europe. But the U.S. insists those requests are non-starters.

“This escalation of the situation, it's been going on for years in terms of this continuing refusal to allow the problems in Ukraine to be sorted out internally,” said Michalchuk.

On Sunday, Russia’s ambassador to Canada said Joly has an “open invitation” to meet with officials in Moscow.

Some groups, like the Ukrainian Canadian Congress (UCC), have called on Canada to impose harsher sanctions against Russia and to provide Ukraine with weapons. UCC also wants Ukraine to be given a Membership Action Plan to join NATO.

“The West bears a lot of responsibility in terms of its efforts to destabilize Ukraine and prevent a real solution to the issues within Ukraine,” Michalchuk added, noting that NATO has expanded into Eastern Europe for two decades despite opposition from Russia.

As well, the Canadian Armed Forces have been training Ukrainian military forces through operation UNIFIER since 2015, while the airforce has deployed CF-18s to engage in "air policing" patrols at the edges of Russian airspace since 2014.

Back in October, the Ottawa Citizen reported that a U.S. study found that extremists with a far-right group in Ukraine’s military called “Centuria” had bragged about receiving training from the CAF.

As well, in July 2018, Canadian officials met with and were briefed by leaders of the Azov Battalion, a neo-Nazi unit that was officially incorporated into the Ukrainian National Guard in 2014, despite the officials being warned about the group’s far-right ideology.

Lorincz said another concerning aspect of any potential conflict with Russia is the fact that both Russia and the NATO alliance are armed with nuclear weapons.

Editor's note, Jan. 29, 2022: This newsletter has been updated to clarify that in 2014 the Azov Battalion was formally incorporated into the Ukrainian National Guard.