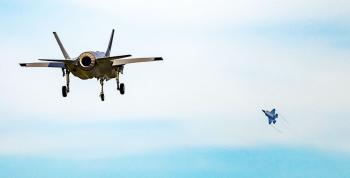 On Monday, the Canadian Press (CP) published a former Lockheed Martin test pilot’s call for Canada to fully commit to buying F-35 fighter jets without fully disclosing his past paid involvement in a decade-long PR campaign advocating for the purchase.

Lockheed Martin is the American weapons company that designed and manufactures the F-35 warplane, which has been beset with hundreds of technical problems. The Canadian government recently announced it was in the “finalization” phase of procuring 88 new F-35s to replace this country’s existing fleet of CF-18 jets.

An original version of the CP article, archived by The Maple, explained:

“Retired lieutenant-colonel Billie Flynn spent more than 17 years flying the F-35 as a test pilot after a 23-year career in the Royal Canadian Air Force … He says Canada has avoided many of the teething problems that have plagued the F-35 during its early years, and is now poised to receive better planes at a lower price than if it had purchased the aircraft under the previous Conservative government.”

A few hours after the article was published, Ottawa Citizen reporter David Pugliese pointed out that Flynn has been publicly advocating for Canada to purchase the new warplane for more than a decade.

Pugliese tweeted: “Stop the presses! The guy who spent more than a decade trying to sell Canada the F-35 says Canada should buy the F-35 right away.”

The original version of the CP article described Flynn as a “former F-35 test pilot,” but did not state that this role was as an employee of Lockheed Martin. As indicated on Flynn’s LinkedIn profile, he worked as a test pilot for the weapons manufacturer between 2003 and 2020.

Later in the day on Monday, the CP article was updated in several outlets to acknowledge that Flynn “joined Lockheed Martin as an F-35 test pilot in 2003” and the fact that the F-35 "continues to experience problems."

Flynn’s personal website explains further that he “acted as global spokesman for the F-35 program, the largest defense program in history and leading the development of the Fifth Generation fighter aircraft.”

As well, Flynn’s site notes his communications expertise in explaining military concepts to “all audiences.”

Back in 2013, CBC’s Terry Milewski reported that in response to criticisms over the F-35’s high costs and technical problems, Lockheed Martin launched a "publicity counter-strike and is determined to keep Canada from bailing out of the program.”

In 2010, Stephen Harper’s Conservative government had committed to purchasing F-35s, but concerns about the warplane’s costs and technical problems forced it back to the drawing board.

In the 2013 CBC broadcast, Flynn, then working for Lockheed Martin, told Milewski: “I think this is "the" airplane for sovereignty protection,” before showing off the warplane’s “Darth Vader helmet,” which critics at the time said didn’t work properly.