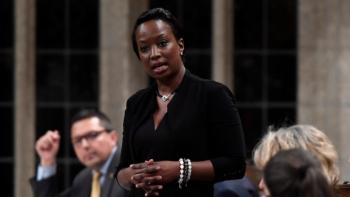 This report is not directly related to Canadian foreign policy. Instead, this interview by the CBC with former Liberal MP Celina Caesar-Chavannes offers insight into PM Justin Trudeau's attitudes towards Black people generally.

Former Liberal MP Celina Caesar-Chavannes portrays Trudeau as a image obsessed narcissist who views Black people as political props. She accuses Trudeau of not following through on promises to dismantle systemic racism in Canada.

Trudeau's attitude towards Black people at home and abroad has always been underlined by complete disregard. From wearing Blackface on multiple occasions as a young man to supporting a dictator in Haiti, Trudeau's policies are evidently harmful to Black people in Canada and in Haiti.

Currently, Trudeau continues to support Jovenel Moise.Moise, the ex-president of Haiti, is refusing to step down from power. Millions of Haitians protest daily against his illegitimate regime. Moise is propped up by western powers like Canada and the United-States, whose foreign policies favor authoritarians and undermine democracies in Latin America & the Caribbean.

Former Liberal MP Celina Caesar-Chavannes talks to Andrew Chang about her expletive-laced discussion with the prime minister and how she felt tokenized during her time in politics.