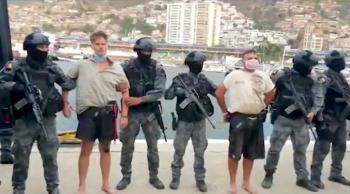 Two US citizens, former Army Special Forces commandos, captured in the failed invasion of Venezuela in May 2020, known as Operation Gideon

A Venezuelan army defector who helped plan a failed May 2020 invasion of Venezuela, Cliver Alcalá, said the coup-plotters were in touch with the CIA and other US government agencies.

According to Alcalá, senior US officials approved of the operation, which sought to violently overthrow the leftist Chavista government of Venezuelan President Nicolás Maduro, who was democratically elected.

Alcalá’s lawyers made this revelation in a US court filing on January 28, the Associated Press reported.

US government links to Operation Gideon, botched invasion of Venezuela

On May 3 and 4, 2020, dozens of right-wing Venezuelan insurgents and two former US Army special operations comandos tried to invade Venezuela, with plans to kidnap President Maduro and take him to the United States.

The plot, known as Operation Gideon (Operación Gedeón in Spanish), was a disaster. It was quickly foiled by the Venezuelan government, with the help of local socialist fishermen, and the invaders were arrested.

The invasion had been organized by a Florida-based mercenary firm called Silvercorp USA, founded by a former US Army special forces comando named Jordan Goudreau.

In a breach-of-contract lawsuit, Goudreau said he had discussed the coup plot with two US government officials at a Miami golf resort owned by former President Donald Trump, where he was given a green light.

But when the operation was foiled by Venezuelan authorities, the US government immediately threw Goudreau and his team under the bus.

On March 26, 2020, a few weeks before the invasion, the US government put out a series of multimillion-dollar bounties on the heads of current and former top Venezuelan government officials. One of these was the former general Clíver Alcalá.

This surprised Alcalá, because by that point he had for several years been a bitter opponent of the Venezuelan government of President Maduro.

In fact, in 2018 Alcalá had moved to northern Colombia, to the city of Barranquilla, near the border of Venezuela, where he began to train Venezuelan military defectors and anti-Chavista paramilitaries, making plans to wage an armed insurgency against the Venezuelan government.

In northern Colombia, Alcalá worked alongside Goudreau, the US mercenary who said he had the Trump administration’s support, to create an anti-Venezuela guerrilla army.

The United States had been supporting Alcalá’s efforts to try to violently overthrow Maduro. So when Washington put out the bounty, Alcalá complied and willingly turned himself in to US authorities in Colombia, where he had been residing. He agreed to be an informant and to be extradited to the US.

Alcalá’s attorneys subsequently made it clear in their statements to US authorities that Alcalá’s operations had been approved by Washington.

“Efforts to overthrow the Maduro regime have been well known to the United States government,” Alcalá’s lawyers wrote in a November 2021 letter, cited by the Associated Press.

Alcalá’s “opposition to the regime and his alleged efforts to overthrow it were reported to the highest levels of the Central Intelligence Agency, National Security Council, and the Department of the Treasury,” his attorneys added.

Another coup-plotter says US and Colombia supported 2020 invasion

This is not the first time that someone involved in the failed 2020 invasion of Venezuela said the US government was involved.

A right-wing Venezuelan who helped to organize Operation Gideon, Yacsy Álvarez, said she met with FBI and DEA officials in Florida, and that the agencies knew exactly what was being planned.

Álvarez had served as a translator and assistant for Goudreau, as he and Alcalá trained anti-Venezuela militants in Colombia.

According to Álvarez, the Colombian government supported the failed invasion plot as well. Colombia’s far-right President Iván Duque and former president Álvaro Uribe were involved in the operation, she said.

Her lawyers accused Colombia’s spy agencies of setting a “trap” to blame her when the operation went awry.

López is seen in Venezuela to be the real power behind Juan Guaidó, who was a little-known figure when the United States appointed him “interim president” in January 2019.

In a June 2020 article titled “Venezuelan Opposition Guru Led Planning to Topple Maduro,” the Wall Street Journal reported that López “was behind a months-long effort to contract mercenaries to overthrow President Nicolás Maduro,” and had “considered at least six proposals from private security contractors to carry out military incursions to spur a rebellion in Venezuela’s armed forces and topple” the leftist government.

López, Guaidó, and fellow members of their far-right political party Voluntad Popular (Popular Will) contracted Silvercorp USA, and worked with Goudreau and Alcalá to plot the invasion.

Despite his clear involvement in an attempted invasion of his home country, and his leading role in several violent coup attempts, López lives comfortably today in Madrid. He enjoys the protection of the Spanish government, while he continues to organize the extremist Venezuelan opposition from abroad.

The Joe Biden administration, for its part, has continued Trump’s policy of recognizing unelected coup leader Guaidó as the supposed leader of Venezuela, although, as of January 2022, fewer than 15 countries refuse to acknowledge that Maduro is the real president.