As climate change worsens, the Liberals are spending $300 billion on new warships 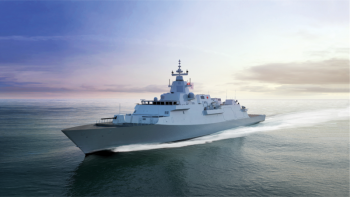 At this point, we should be accustomed to political leaders in Ottawa being alarmingly out of touch with the needs of ordinary Canadians. And yet, the federal government’s determination to purchase new warships for the Royal Canadian Navy in the face of spiraling cost overruns, ecological crisis, inadequate compensation plans for Indigenous peoples, underinvestment in health care, and unsustainable domestic living costs stands out as a particularly egregious example of apathy toward the basic needs of people within the country.

Initially, the federal government approved the development and purchase of a new fleet of Canadian Surface Combatants at a cost of $26 billion. Now, that cost has risen to $84.5 billion, almost five times more than the $17 billion set aside for the Liberal government’s decarbonization initiatives in 2021. Additionally, the cost of maintaining and operating the ships over the next 65 years will reach $219.8 billion, bringing their total cost to taxpayers to over $300 billion. As Ottawa Citizen journalist David Pugliese writes, this makes the acquisition of the Surface Combatants “the largest single expenditure in Canadian history.”

At the same time that it is proceeding with the warship purchase, the federal government is fighting human rights tribunal rulings to compensate Indigenous peoples and fund infrastructure programs on reserves. It is also lagging on substantive climate action. Simultaneously, the cost of living in Canada is continuing to rise at an unsustainable rate, leading to a 35 percent increase in food bank use since March 2019. For a country already undergoing a dangerous food insecurity crisis in which millions of Canadians struggle to find enough to eat, this is an appalling development.

In the midst of this whirlwind of social and economic crises, Pugliese writes that the Irving Shipyard, owned by one of Canada’s wealthiest families, is asking the federal government for more subsidization, which it is likely to receive:

Irving’s Halifax shipyard was selected in 2011 as the winner to build new fleets of warships for the navy, including CSC. Among the requirements for winning the bid was that the yard had the capability to build the vessels and taxpayers wouldn’t need to contribute funding to outfit the facilities for the task. But Irving is now asking the federal government for additional money so it can modernize its facilities to build the CSC. Industry sources say the Liberals are considering providing at least $300 million to the shipyard owned by one of Canada’s richest families.

The warship acquisition is also proceeding in the context of an increasingly militarized posture in Ottawa. Chief of the Defence Staff General Wayne Eyre has called on North American weapons manufacturers to enter a “war footing” and “increase their production lines to be able to support the requirements that are out there, whether it’s ammunition, artillery, rockets…you name it.” To this end, the Department of National Defence co-sponsored an October 25 conference at the Canadian Global Affairs Institute titled “Putting Canadian Defence Procurement on a War Footing.” Other sponsors included Lockheed Martin, General Dynamics, Irving Shipbuilding, BAE Systems Canada and General Atomics.

Eyre has also claimed that Russia and China will soon threaten Canada’s “tenuous hold” over Yukon, the Northwest Territories, and Nunavut, and supported the federal government’s plans for “the modernization of NORAD and continental defence and the establishment of an undersea network of surveillance sensors.” In a particularly dystopian admission, Eyre asserted that because climate change is causing so much melting in the Arctic, new shipping lanes will open up, providing Beijing and Moscow with new opportunities to threaten Canada’s sovereignty. Even taking this claim at face value, the solution is ludicrous: preventing the melting in the first place through rapid and far-reaching climate action is obviously preferable to increased militarization, which will itself exacerbate emissions.

Currently, people in Canada are facing a suite of threats to the ways of life to which they are accustomed, none of which can be answered with increased military spending. Climate change, unequal social and economic structures, the underfunding of basic public services, and inaction on the cost of living crisis are worsening and will continue to worsen the effects of structural violence within Canada, causing immense suffering through preventable illness, lack of access to nutritious food and clean water, and the intensifying effects of our ongoing ecological collapse. In the midst of these threats, the fact that the federal government is prioritizing a $300 billion warship acquisition is disquieting indeed.