The company formerly known as Blackwater is getting paid millions by the Canadian government, reports say 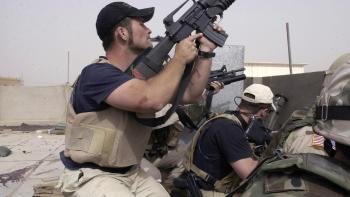 Cover image: Employees working for the company previously known as Blackwater were accused of massacring civilians in Iraq (Canadian Press)

In the 2016-2017 fiscal year the government purchased two million dollars in services from Academi, the third iteration and name of the private defence contractor linked to mass killings and abuses, according to spending reports from the Department of National Defence (DND).

In the 2015-2016 fiscal year, the first year of Trudeau’s mandate, the government paid Academi over $2 million. In the first two years of the Liberal government, payments to the company were more than double what the Conservatives spent on Academi in their last two years in office.

A spokesperson for the Department of National Defence (DND) said the services include training and occasionally the use of Academi facilities by the government's own instructors.

Despite widespread condemnation of the company for the behavior of its past employees — often former special forces soldiers from the U.S. or other NATO partners — these are the first reported contracts between the governing Liberals and the North Carolina-based contractor.

The contracts continue more than a decadelong connection between Blackwater and its subsequent iterations and the Department of National Defence, first established as far back as 2006 under the Conservatives at the beginning of the combat mission in Afghanistan.

VICE News previously uncovered over half a million dollars worth of contractsfor training and equipment with Academi in 2015.

The multimillion-dollar deals with the infamous contractor come in the face of a 2016 Canadian Army Journal article, an official publication of the military, critical of Canada’s ongoing business with Academi.

“The optics of Canada’s continued patronage of Academi under such circumstances are not helped by the fact that Canada was one of the 17 countries that jointly established and ratified the Montreux Document in 2008,” said the article referring to the international agreement that pledges to monitor the performance of private military contractors in conflict zones.

Part of the Montreux Document holds that signatories need to take into account the past human rights record of contractors, and Canada likely fails on this point when it comes to contracting training services from Academi, the Army Journal said.

The government said it’s aware of Academi’s past as Blackwater but defended continuing to use the company’s services as cost effective and touted the “specialized training” elite operations soldiers receive at its facilities.

Soldiers from Canadian Special Operations Forces Command — the commando wing of the Canadian military — received training from Academi along with other organizations within the Canadian Armed Forces, while the company counts former “Canadian Special Forces” operators among its list of paid instructors.

According to Lebouthillier, the military uses Academi facilities, “for short periods of time” because it is, “the most cost effective alternative to meet the training requirements necessary.” “Similar facilities do not exist in Canada; or where facilities do exist, Canadian facilities cannot always accommodate the required volume of training,” Lebouthillier said.

Academi did not respond to requests for comment from VICE News about its Canadian training operations.

Former Prime Minister Stephen Harper’s government was in power during most of the war in Afghanistan, at a time when Blackwater services proliferated. For years, his government bought millions in training from the private defense contractor even as news broke that its employees killed 17 civilians in Baghdad, an incident that became known as the “Nisour Square massacre.”

Prime Minister Justin Trudeau has played down Canada’s global combat operations since taking office, but increased special forces support in Iraq during the war against ISIS — the same types of Canadian troops that receive Academi training.

CANSOFCOM — the elite branch of the military in Canada — is also the most secretive. Its only known, recent deployments include combat operations in Iraq and training missions in Jamaica and parts of Africa.The outfit functions under the highest levels of top secrecy. Even during the deployment to Iraq, the Trudeau government took unprecedented measures to shroud the mission from reporters.

Blackwater founder Erik Prince remains a controversial figure in American politics. No longer the owner of the company, Prince has since attempted to create a private air force and was an early supporter of now-President Donald Trump. Prince is also a proponent of privatizing the war in Afghanistan to contractors like his former company. Lastly, he's allegedly hawking the creation of a personal spy agency in the employment of President Trump to counter the CIA and the “Deep State”, fear among some Republican power brokers.

Academi stressed it’s no longer the same as Blackwater and distanced itself from Prince in a statement to VICE News in 2015. A spokesperson said the company was now owned by a group of private investors who purchased the facilities from Prince, but that Prince, “retained all rights to the Blackwater name/brand as well as several other entities that once operated under the Blackwater umbrella.”

Correction: A previous headline of this story incorrectly referred to the private military company Acadami as its former name, Blackwater. The headline has been corrected.