Condemn the invasion, but retain your critical faculties 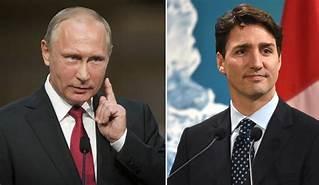 Moscow’s bombing and invasion of Ukraine must be condemned by all those who believe in a rules-based international order and peaceful solutions to world problems. Hopefully Russian internationalists can come together to create a peace movement powerful enough to pressure their government.

While criticizing Russian imperialism, however, we shouldn’t lose sight of Canada’s significant role in stoking the divisions within Ukraine that have contributed to today’s crisis. Non-interference in other countries’ affairs is also an important principle of international law.

Yet Ottawa has long sought to destabilize the relationship between Russia and Ukraine. In 2014 Ottawa actively assisted the ouster of President Viktor Yanukovych who was oscillating between the European Union and Russia.

The coup divided the Ukraine politically, geographically and linguistically (Russian is the mother tongue of 30% of Ukrainians and as much as 75% of those in eastern cities). The largely Russian-speaking east protested the ouster of Yanukovych, who was from the region. Many opposed the post-coup right-wing nationalist government, which immediately eliminated Russian as an official language. After a referendum and fighting, the Donetsk and Luhansk People’s Republics were proclaimed in the eastern Donbas region, which Moscow recognized as independent on Monday.

Canada assisted pro-European Union, often far right, protesters that rallied in central Kyiv’s Maidan square from November 21, 2013, to February 22, 2014. Ottawa also quickly recognized the post-coup government despite having sent election observers to monitor the 2010 presidential and 2012 parliamentary elections, which were won by Yanukovych and his Party of Regions. As revealed in a leaked tape between Assistant Secretary of State Victoria Nuland and US Ambassador to Ukraine, Geoffrey Pyatt, US officials midwifed Yanukovych’s unconstitutional replacement.

Canada funded groups behind the EuroMaidan protests. Ottawa and the Ukrainian Canadian Congress have ploughed significant resources into anti-Russian, nationalist, elements of Ukrainian civil society since before the 2004 Orange Revolution. Throughout the protests against Yanukovych, the Canadian embassy’s local spokesperson, Inna Tsarkova, was a prominent member of AutoMaidan, an anti-government group.

A little over a week into the EuroMaidan protests Canada released a statement critical of government repression, which University of Ottawa professor Ivan Katchanovski says was precipitated by far-right infiltrators. In a November 30, 2013, release titled “Canada Condemns Use of Force Against Protesters in Ukraine” Foreign Affairs Minister John Baird declared, “Canada strongly condemns the deplorable use of force today by Ukrainian authorities against peaceful protesters.” Six days later Baird visited Maidan square with Paul Grod, president of the ultranationalist Ukrainian Canadian Congress. From the stage Grod announced Baird’s presence and support for the protesters, which led many to chant “Thank you Canada”. Baird called on Ukrainian authorities to respect the protests and bemoaned “the shadow that Russia is casting over this country.”

On December 27 Canada’s chargé d’affaires visited protest leader and journalist Tetyana Chornovol in the hospital after she was violently attacked. Three weeks earlier Chornovol was widely reported to have participated in seizing Kyiv City Hall. A former member of a far-right party, Chornovol had previously been arrested on numerous occasions and was subsequently charged with murder for throwing a Molotov cocktail at the Party of Regions headquarters during theEuroMaidan protests.

Prime Minister Stephen Harper repeatedly expressed support for the protesters and criticized Yanukovych. On January 27 he slammed the Ukrainian president for “not moving towards a free and democratic Euro-Atlantic future but very much towards an anti-democratic Soviet past.”

The next day Ottawa announced travel restrictions and economic sanctions on individuals close to the elected president. At the press conference to announce the measures Citizenship and Immigration Minister Chris Alexander said, “you [Yanukovych] are not welcome in Canada and we will continue to take strong action until the violence against the people of Ukraine has stopped and democracy has been restored.” Ottawa subsequently slapped travel bans and economic sanctions on dozens of individuals aligned with Yanukovych.

At the height of the protest, activists used the Canadian embassy, which was immediately adjacent to Maidan square, as a safe haven for “at least a week”. The protesters gained access to a mini-van and other Canadian material. In a story a year after the coup the Canadian Press quoted officials from allied European nations accusing Canada of being “an active participant in regime change.”

At least some of those allowed to use the Canadian embassy were from the far right. In “The far right, the Euromaidan, and the Maidan massacre in Ukraine” professor Katchanovski reported, “the leader of the [far right] Svoboda-affiliated C14 admitted that his C14-based Maidan Self-Defense company took refuge in the Canadian embassy in Kyiv on February 18 and stayed there during the Maidan massacre.”

On February 19 and 20, more than 50 were killed in violence that was widely blamed on government security forces. But Katchanovski shows that far-right activists were in fact responsible for many of these deaths.

The killings precipitated the collapse of the government. After Yanukovych was ousted, Ottawa sought to shore up the unconstitutional government. Soon after, Baird “welcomed the appointment of a new government”, saying, “the appointment of a legitimate government is a vital step forward in restoring democracy and normalcy to Ukraine.” But the country’s constitutional provisions dealing with impeachment or replacing a president were flagrantly violated.

Days after the coup Baird led a delegation of Conservative Party MPs and Ukrainian-Canadian representatives to meet acting president, Oleksandr Turchynov and new prime minister, Arseniy Yatsenyuk. Canada’s foreign minister announced an immediate $200,000 in medical assistance for those injured in the political violence. Subsequently, Ottawa announced $220 million in aid to the interim government. Harper said, “I think we really have to credit the Ukrainian people themselves with resisting the attempt to overturn their democracy and to lead their country back into the past.”

After the coup Canada’s PM was the first G7 leader to visit the interim government. Alongside Baird and Justice Minister Peter MacKay, Harper told the acting president, “you have provided inspiration and a new chapter in humanity’s ongoing story of the struggle for freedom, democracy and justice.” During his visit to shore up the US and Canadian installed government Harper accused Putin of seeking to destabilize international security and return the world to the “law of the jungle.”

Canadian officials stayed mum about the significant influence far-right nationalists had within the interim leadership. In subsequent weeks a wave of violence swept Ukraine with right wing nationalists perpetrating many killings, including a massacre that left 50 dead at Odesa’s trade union hall.

Over the years since 2014 fighting intensified, waned, then intensified again in the Donbass region. Some 14,000 have died. The Ukrainian military has been responsible for the bulk of the death in recent years. Fighting escalated again over the past couple of weeks. The pretext Putin has offered for invading is to protect those in the Donbass and Ukrainian Russian speakers more generally.

While other geopolitical dynamics are also at play, the 2014 coup is important to understanding the horrific violence now on display.

In his investigation of Euromaidan activists’ use of the embassy in Kyiv Canadian Press reporter Murray Brewster writes, “Canadians are not very popular in some quarters and occasionally loathed by pro-Russian Ukrainians.”

Condemn Russia’s invasion but understand that Canada has often been the opposite of a force for good in that part of the world. It is important now, as war hysteria inevitably grows, that we do not fall into the trap of uncritically supporting “our side”. That way leads to escalation and the threat of nuclear annihilation.