Conference and Large Demonstration in Cap Haitien Say "MINUSTAH Out" 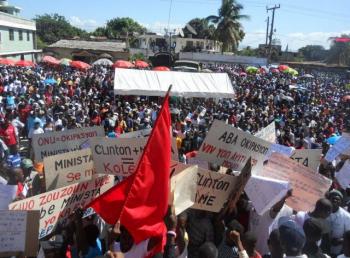 Introductory note:
On November 18, 2011, several thousand people marched in the streets of Cap Haitien, Haiti's second largest city, in a demonstration to demand the withdrawal of MINUSTAH from Haiti and compensation for the victims of cholera. The march coincided with the anniversary of the historic defeat of France in 1803 by Haitian revolutionaries at the Battle of Vertieres. That was the final battle that secured the independence of Haiti.
The demonstration was organized by Mobilization Committee for Compensation to the Victims of Cholera (Collectif de mobilisation pour dédommager les victimes de choléra ) and by organizations throughout Haiti and the Americas that were attending a three-day conference in Cap Haitien on Nov. 16, 17, 18 for the withdrawal of MINUSTAH from Haiti. The coordinating committe of the conference was the International Liaison Committee of Workers and Peoples' Rights. See photos below.
Below are two items:
* The lengthy resolution adopted by the conference in Cap Haitien, in English and French.
* A report on the conference that was published on Alterpresse (in French ).

Caribbean Conference calls for Joint Action for the Sovereignty of Haiti