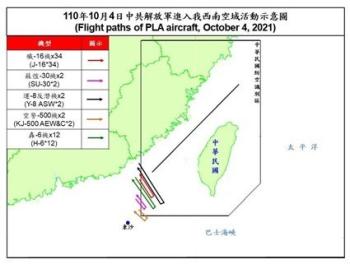 Are you getting the feeling that there is a relentless effort by the Canadian political establishment and media to untiringly vilify China as we move closer to the Beijing Winter Olympics?

One of the pressure points now being used against China is Taiwan.

Taiwan is a breakaway part of China. It was invaded and colonized by Japan in 1895. After the defeat of the Japanese in the Second World War, Taiwan reverted back to Chinese control. Following Chiang Kai-Shek’s defeat in the Chinese Civil War, he moved his Republic of China administration to the Island as the seat of his Kuomintang government. The KMT still maintains that there is one China of which Taiwan is an integral part.

The KMT and the Republic of China was founded by Sun Yat-sen, who allied the party with the Comintern. Chiang took over the KMT after Sun’s death and quickly betrayed the Chinese Communists, with whom the KMT were previously allied. The Americans backed the corrupt Chiang regime during the Civil War against Mao’s Communists and continues to prop up the Taiwanese government politically, economically and militarily. Where does Canada stand in this China/Taiwan/US intrigue?

When Pierre Trudeau, Justin’s father, decided to establish diplomatic ties with the People’s Republic of China, on October 13, 1970, Canada adhered to the one-China policy and “took note” of the PRC’s correct claim that Taiwan is an inalienable part of China. Trudeau was one of the first Western leaders, after France in 1964, to set up diplomatic relations with Beijing, showing the way for Washington, which recognized the People’s Republic nine years later. The UK recognized the PRC in 1950 but did not set up full diplomatic relations until 1972.

The US was increasingly alone with its stance to isolate China as the United Nations, led by an overwhelming number of Third World countries, voted to seat the People’s Republic of China to replace Taiwan as the sole representative of the Chinese people in 1971.

The anti-China zealots with different campaigns, but similar aims

Canadian MP Michael Cooper is one of the leading anti-China warriors in Canada.

Cooper worked to stir up tension in a November 18, 2021 statement criticizing the Canadian Institute of Health Research for calling Taiwan a province of China. Apparently, the CIHR receives grant applications from people in Taiwan and refers to the territory as “Taiwan – Province of China” as the country of origin, which is the legitimate protocol as far as the international community is concerned. This reference to the country code is defined by the International Organization for Standardization (ISO). But Cooper does not like that reference as he ups his campaign to divide Taiwan from China in violation of international standards. Cooper maintains his bullying by trying to intimidate Canadian private enterprises for adhering to the international norm of recognizing Taiwan as a province of China with this tweet, “Canada cannot fully support #Taiwan on the world stage until we recognize it at home. It’s time for Canadian institutions & corporations to stop calling Taiwan a province of China.”

Cooper is far from the only grandstander on this issue. Among the pro-Taiwan establishment figures is Dominic Cardy, a former National Democratic Institute operative who went on to serve as the New Brunswick NDP leader. As Minister of Education and Early Childhood Development in the New Brunswick Conservative government, Cardy has made it his mission to oppose the Chinese government, not unlike the Christian zealot, Adrian Zenz.

As the powerful, mind-shaping Education Minister, he is in a position to mold the minds and hearts of unsuspecting youth of his province, and he has started his anti-China initiatives by planning to eliminate the Confucius Institute. Cardy testified at the House of Commons Special Committee on Canada-China Relations that “One of my goals is to work with the Government of the Republic of China, Taiwan, to try to replace any programming that's lost because of the ending of our relationship with the Confucius Institutes.”

Perhaps Cardy is lobbying for a federal appointment in Global Affairs as he admits to being in discussions with Taiwanese authorities to find a replacement for the Confucius Institute. “We've been working with the representatives from the Republic of China, Taiwan, who have an astonishingly high-quality educational exchange program that I'd encourage everyone to look into.” The USA has also been pushing Taiwan to find an alternative to mainland China’s Confucius Institute, which they want to expel from North America once and for all. See this Canada Files article on the Confucius Institute witch hunt.

The Bill which could crash Canada-China relations

Now the Federal Conservatives want to weaponize these pro-Taiwan sentiments with Michael Cooper’s proposed private members bill C-315 (June 17, 2021), “An Act respecting a framework to strengthen Canada-Taiwan relations.” Cooper’s C-315 is a dangerous bill, introduced two months before the 2021 federal election was announced. While it would have to be re-introduced for this seating of parliament, if this happens, and the bill is passed, it will set Canada’s relations with China back 50 years.

This delay has not stopped Cooper from campaigning for Taiwan separatism. His Bill is endorsed by the MacDonald-Laurier Institute in its ongoing propaganda campaign to split Taiwan from China. The mainstream media is giving the bill the coverage needed to keep Taiwan in the public eye. Aidan Jonah exposed how the MLI is the de facto lobby for Taiwan in Canada.

It would take a legal mind to sort through some of the weasel language in the bill. As an example, Clause 3.1c, entangles Canada into the internal affairs of China in relation to Taiwan by saying any “threat” to Taiwan would be of “grave concern to Canada.”

Clause 6.1 grants Taiwan legal rights in Canada with the ability to “sue and be sued in a court in Canada in accordance with the laws of Canada, in particular the laws respecting the status of states, relations between states and immunity entitlements granted to states.” It seems this would grant full diplomatic immunity to an unrecognized state entity through the back door.

Bill C-315 would tie the Trudeau government’s hands, and further deteriorate Canadian relations with China, by essentially recognizing the state entity of Taiwan. This is the goal of the right-wing politicians like Michael Cooper and Dominic Cardy.

The People’s Republic of China has normal diplomatic relations with the international community. By contrast, 15 countries have diplomatic relations with Taiwan. Many of these states are small and economically weak, such as Belize, Marshall Islands, Nauru, Palau and Paraguay. The governments there survive by the grace of the United States. The pro-Taiwan forces want to add Canada to this infamous list. Before they could even get this effort fully going, one more country may drop Taiwan, due to Xiomara Castro’s victory in Honduras’ presidential election. Castro pledges to restore relations with China.

It is not clear what the other three parties’ positions are on the items raised in C-315. The Liberal government wants to avoid being cornered by the Conservatives. As with the lack of decision on Huawei, the Liberals might take a do-nothing policy to avoid disrupting the status quo and further antagonizing the Chinese government. The NDP member of the House of Commons Committee on Canada-China Relations and the co-chair of the committee, Jack Harris has been known to take a hawkish position on China. Harris supported the various anti-China resolutions criticizing China on Human rights such as the lie that China is committing genocide on the Uighur population in Xinjiang.

This House Committee purports to have an innocuous aim, as its mission statement says, “the Committee was appointed to conduct hearings to examine and review all aspects of the Canada–China relationship, including, but not limited to, consular, economic, legal, security and diplomatic relations.” However, it has actually become the center of hostility towards the Chinese government,  and to push Canadian foreign policy in line with the US on relations with China.

The Canadian liberal left has been quiet on the issue of Taiwan. The complexity of the issue does not allow them to nuance the situation without appearing to side with the imperialists on Taiwan.

At the beginning of October, the western media created an uproar following the lead of the US State Department’s condemnation of Chinese aircrafts flying over Taiwan’s Air Defence Identification Zone (ADIZ). The Taiwan ADIZ was created by the US in 1946, when the Americans claimed an omnipotent presence in Asia after WWII. The Zone covers three other Chinese provinces, Fujian, Zhenjiang, Jiangxi, as well as Taiwan, Taiwan Strait, and part of the East China Sea. Even the Taiwanese Ministry of National Defence map (above) showed the Chinese “incursion” flew over the tiny portion at the southwest corner of the ADIZ and never over Taiwan itself. This is an example of how the media hypes up a press statement from the US State Department to prepare the Canadian public for possible war with China.

American sabre rattling over Taiwan is accompanied with a full diplomatic campaign to cast the Island as a true democratic state to be defended at all cost. Militarily, the US has provided $30 billion in arms sales to Taiwan over the Bush, Obama, and Trump administrations. It was recently disclosed that American military personnel are stationed there to train the Taiwanese arm forces. There is pending legislation introduced by the Republicans to provide $2B per annum in military aid each year until 2032. In all likelihood the bill will pass since Taiwan usually gets bipartisan support, with the Democratic president Biden calling for strengthening ties with the Island state.

Days after the Xi Jinping/Joe Biden summit meeting on November 15, Biden decided to poke China in the eye by inviting Taiwan to the much-touted Summit for Democracy, December 9-10. This summit is an attempt by the US to rally the West and its allies to counter the growing influence of China in the Global South.

While China was celebrating the 110th Anniversary of the Sun Yat-sen revolution to overthrow the Qing Dynasty, October 10, six US-aligned countries assembled a naval fleet of 17 vessels, including one Canadian frigate, and sailed into the Asia-Pacific to encircle China. The AUKUS alliance of Australia, UK and the US was formed earlier this year to help Australia develop nuclear submarines to further menace China. Not to be deterred, Xi Jinping, called for a peaceful reunification with Taiwan, during the celebration to commemorate the 1911 republican revolution.

Canada should try to facilitate this peaceful approach rather than stir up tension in the area with its warships and its belligerent talk.