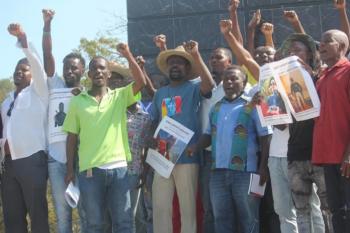 Leaders and militants of the Konbit Oganizasyon Politik, Sendikal ak Popilè yo at a demonstration in early January 2020.

Issued on Mar. 8, 2020, this is a statement by a committee which reflects a broad cross-section of Haiti’s progressive anti-imperialist popular movement.

The Work Brigade of Political, Union, and Popular Organizations (Konbit Oganizasyon Politik, Sendikal ak Popilè yo) deeply bows to salute the courage of the conscientious people, organizations, and militants who continue to fight in order to free the nation from the claws of the local and international mafia and predators. Despite the cry for help of the masses across the nation, Konbit notes that:

It is in this difficult context that Jovenel Moïse with the support of the Core Group [the ambassadors of Washington and its allies] has put in place a new de facto government with the same local thieves to continue plundering state coffers and to try to organize rigged elections. For us in Konbit, these moves have been carried out in the framework of a well-calculated project to turn the nation upside down.

We can remember in 2006 in Iraq, the U.S. government and its allies assassinated Saddam Hussein and put the country upside down so it could take control of its resources. In October 2011, the U.S., France, and their allies assassinated Muammar al-Gaddafi. Despite the presence of the UN mission in Libya (MANUL), they created chaos in that country.

It is important for us to know that the disaster capitalists with their criminal economy have no problem to ally with the local mafia here to impose their political and economic project. This is how we must understand the U.S. administration’s support for the mafioso team of Jovenel Moïse and the new de facto government they have just set up. But in Konbit, we are clear: Jovenel Moïse and the de facto government of corrupt politicians cannot resolve the crisis which is tearing the nation asunder. For that reason, Konbit demands:

1) For political actors and the population in general to continue to hold high the torch of mobilization against the PHTK’s mafia power. Political leaders must stop trying to find help in embassies and instead work to strengthen the mobilization.

2) For the police to continue to struggle until they win their demands.

3) For the opposition to install without losing any time a National Transition Authority (ONT) which would have the responsibility to install a new president and new government once Jovenel Moïse leaves power.

4) For the state to take measures to protect the population against the Coronavirus pandemic.

5) For the state to immediately lower the price of gas and public transport.

6) For progressive organizations to unite around the country to organize a large national popular force which would play an important role in orienting the Haitian people’s struggle which must lead to changing the exploitative system where a tiny group of bourgeois with corrupt politicians control most of the nation’s wealth.