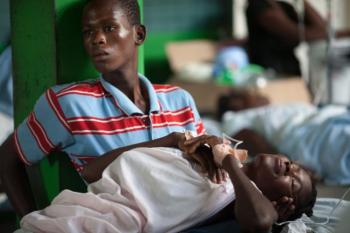 A Haitian boy holds a relative sick with cholera at a clinic in Petite Rivière, Haiti. Haiti’s cholera epidemic, which began in 2010, “did not shock many in the Global North.” Credit: Allison Shelley

After Haiti’s January 2010 earthquake, I moved to Port-au-Prince to help with relief efforts. As a recent graduate of a public health master’s degree programme, and a person of Haitian descent, I thought my expertise and linguistic skills could be of use to the survivors.

The situation was already grave when I arrived there. Amid endemic poverty, political instability and almost no remaining infrastructure, the people of Haiti were struggling to rebuild their lives. But it got significantly worse a few months later, when a silent killer emerged on the scene: cholera.

The cholera epidemic, which broke out near a base housing United Nations troops, killed over 10,000 people and affected more than 800,000 others. It also contributed to the contamination of the island’s main water source, the Artibonite River, further crippling relief efforts.

THE GLOBAL NORTH IS NOW FACING AN EPIDEMIC THAT IS AFFECTING NOT ONLY ITS INTERNAL AND EXTERNAL “OTHERS,” BUT ALL OF ITS OWN CITIZENS INDISCRIMINATELY.

The 2010 outbreak, which was the first large-scale cholera outbreak in the 21st century, brought death and disruption on an unprecedented scale. But it did not shock many in the Global North. After all, what happened in Haiti was in line with their understanding of epidemics –  deadly outbreaks of ancient diseases that affect foreign people in exotic, faraway and (made-to-be) poor lands. They were saddened by the news coming from the Caribbean island, and some even donated money and supplies to try and help, but most did not see the outbreak as a wake-up call to review the readiness of their own countries, and the global community, for a similar epidemic or pandemic.

Fast forward 10 years, and we are in the midst of a pandemic that is devastating not only the Global South, but also countries in Europe, North America, and Australia – countries that had come to believe that, for them, epidemics are a thing of the past. Of course, these countries faced a deadly HIV/AIDS pandemic as recently as the 1990s, but most of their citizens viewed that disease also as something that overwhelmingly affects “others,” namely homosexual men, minority communities, and people from developing countries.

Since being identified in China as a new and dangerous member of the coronavirus family in early January, COVID-19 has spread to more than 140 countries worldwide, including Italy, the United States, the United Kingdom, and Germany. As a highly infectious respiratory disease, it poses a threat to everyone in every society. On Mar. 11, the World Health Organisation (WHO) declared the coronavirus outbreak a pandemic, and the list of affected countries continues to grow rapidly. The Global North is now facing an epidemic that is affecting not only its internal and external “others,” but all of its own citizens indiscriminately.

The pandemic’s death toll has already reached 8,000, and it has inflicted a massive blow to the global economy. The countries that are used to watching epidemics from afar are now scrambling to contain the virus before it causes more devastation to their citizens.

Italy, where more than 1,800 people died from the virus, instituted a nationwide quarantine, leaving the country at a standstill. The U.S. imposed a month-long ban on European citizens trying to enter it. Germany closed its borders with Austria, Denmark, France, Luxembourg, and Switzerland. The German government also banned all public events with more than 100 participants. Spain ordered all residents to confine themselves to their homes and also closed all schools, restaurants, and bars. Air traffic almost came to a standstill. Europe’s busiest airport, London Heathrow, said that total passenger numbers fell 4.8% last month compared with the same period in 2019. People meanwhile rushed to supermarkets to buy “essentials” in bulk, stripping shelves bare of canned goods, pasta, and toilet paper. Many also stocked up on face masks, hand sanitizer, and disinfectants, causing shortages in many areas.

The Global North’s response to the pandemic was in many ways similar to Europe’s xenophobic responses to the plagues of distant history. It not only rushed to close itself up to foreigners in an effort to keep the disease out, but many in these countries responded to the crisis with irrational panic, xenophobia, and racism. From the U.S. to the UK, people of Asian descent faced racist and xenophobic attacks, as people irrationally held them responsible for the outbreak.

Overall, the countries in the Global North failed to see the global nature of the crisis we are currently facing. As they rushed to protect their own, they once again succumbed to old tropes about epidemics being caused by “dirty and strange others.”

Furthermore, they failed to recognize the need for a global public health strategy to contain the current COVID-19 pandemic and similar disease outbreaks that can come in the future. Instead, they focused on themselves and themselves only. Washington, for example, has reportedly offered German scientists working on a coronavirus vaccine a lot of money to give the U.S. exclusive access to their work.

Pandemics do not materialize in isolation. They are part and parcel of capitalism and colonization. The countries that struggled to contain and control major epidemics in the recent past, from Haiti to Sierra Leone, had deficient public health systems prior to these crises, partially as a result of their colonial histories. Moreover, products of capitalism – from war to migration to mass production and increased travel – contribute massively to the proliferation of diseases.

PANDEMICS ARE PART AND PARCEL OF CAPITALISM AND COLONIZATION.

In the world that we live in, where capitalism and the remnants of colonialism fuel wars, unprecedented migration waves, public health crises, and an increasing dependency on international and intercontinental travel, epidemics are inevitable. And, as the COVID-19 outbreak makes crystal clear, no countries, including the members of the Global North, are immune to these outbreaks.

The global community, however, can successfully counter these epidemics if it employs a holistic health policy. To defeat COVID-19, and other pandemics to come, world powers need to learn to act as one. To ensure global health, the global pharmaceutical industry should work to make essential drugs and vaccines affordable to everyone, everywhere. This could start with making any future COVID-19 vaccine free to everyone. Such a move towards solidarity can even reinvigorate the demands for a truly universal healthcare system, where access to healthcare is an indisputable human right for everyone, everywhere.

But to achieve this, the Global North first needs to take responsibility for the public health crises created by the world order from which it benefits and stop viewing epidemics in the Global South, like the cholera outbreak in Haiti, as tragedies of “others.” Once the elites of the world recognize the Global South is not the source but the frequent victim of outbreaks aggravated by capitalism, then we can start building a global health system that could defeat pandemics like COVID-19.

Edna Bonhomme earned her PhD in History from Princeton University in 2017. She is a Postdoctoral Fellow at the Max Planck Institute for the History of Science and currently lives in Berlin, Germany. The original version of this article was published by Al-Jazeera English.