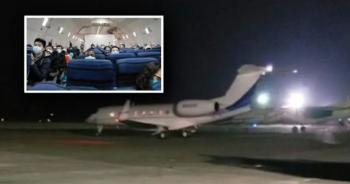 Photos, inside and out, of the small jet with 11 Chinese passengers which refueled in Haiti on Jan. 31.

Aplane originating from China was denied entry into its destination in the Bahamas and was diverted to the Toussaint Louverture Airport in Port-au-Prince on Fri., Jan. 31 when it became low on fuel.

On social media Friday evening, the news spread like wildfire.

Haitians were worried and anxious about a private jet from China with 11 Chinese nationals on board sitting on the tarmac at Toussaint Louverture Airport in Port-au-Prince  since the deadly coronavirus is rapidly spreading in China and to other countries.

A source close to the National Office of Civil Aviation (OFNAC) told the newspaper, Le Nouvelliste, that the passengers and crew members remained on the plane during the entire refueling process.

“Originally, this private plane, which had 11 Chinese on board and three crew members, including two Americans and a Chinese hostess, took off from China to go to Japan,” confirmed the source. “Then, the plane visited several countries in Europe before arriving in the Dominican Republic. Arriving in Haiti on Friday evening, the crew simply wanted to refuel.”

The passengers remained on the plane without ever getting off. “They never left the plane. They pose no danger to the country.”

“At first, the plane had to leave Port-au-Prince to go to the Bahamas which refused them access to their territory,” said our contact at 9:45 am on Friday. “Now Portugal agrees to receive them… The plane will be able to leave Haiti in the next few minutes.”

However, our contact at the National Office of Civil Aviation (OFNAC) was unable to give details about the passengers on the plane or why they arrived in the country after having traveled to several other nations.

The coronavirus, which emerged in China a few weeks ago, has already killed more than 490 people there.

The death toll and number of people infected with the virus, which often produces pneumonia, increases daily with over 24,000 cases worldwide at press time (Feb. 4). In France, six people have been infected and are hospitalized. The global health emergency was declared by the World Health Organization on Jan. 30.

Cases of the virus have been recorded in some 20 countries, including the United States, Germany, Canada, France. Several have already closed their borders to China.

Haitians are rightfully wary of a new disease being introduced into their country, which has a severely debilitated health infrastructure. In October 2010, UN occupation troops from Nepal imported cholera into Haiti, unleashing an epidemic which killed close to 10,000 Haitians and sickened some 800,000.