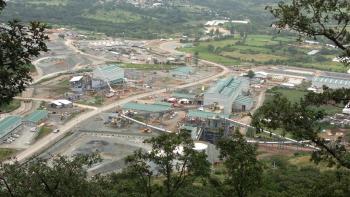 The Escobal operation, in Gautemala.

The six-year legal battle between a group of Guatemalan protestors and Tahoe Resources of Vancouver, Canada, has come to a conclusion, with new owner Pan American Silver issuing a public apology on behalf of the company that it bought for $1.07-billion in February this year.

Pan American Silver conceded on Tuesday that “the shooting on April 27, 2013, infringed the human rights of the protestors”, and the mining company, on behalf of Tahoe, apologised to the victims and to the community.

In April 2013, the protestors gathered at the entrance to Tahoe's Escobal mine in south-east Guatemala to protest the lack of community consultation on the project. The head of security for the mine, Alberto Rotondo, ordered security personnel to break up the demonstration by shooting at the protestors. Several were injured, one very seriously.

The victims retained Vancouver-based Camp Fiorante Matthews Mogerman (CFM Lawyers) to represent them in a civil suit against Tahoe in Canada.

"This is an important victory for us and our community," said claimant Luis Fernando García. "It vindicates our right to protest and to continue our resistance against mining operations in our community."

The conclusion of the case does not impede the ability of the protestors to exercise their legal rights of protest related to the mine in the future.

In 2017, the British Columbia Court of Appeal overturned a lower court decision and confirmed that the case should be heard in Canada, concluding that there was a real risk that the Guatemalan protestors would not get a fair trial in their own country.

University of Ottawa law professor Penelope Simons, co-author of The Governance Gap, a textbook in the field of business and human rights, agreed. “These types of claims are crucial in terms of ensuring access to justice for victims of business-related human rights violations. They are one of the only means through which such victims can hold businesses accountable and seek reparations for the harm they have suffered.”

Osgoode Hall law school professor emeritus Shin Imai described the resolution as "a major breakthrough in the struggle to hold Canadian companies responsible for the wrongs committed at their overseas operations. It forms an important piece of an emerging legal framework to address human rights issues arising from conflicts between Canadian mining companies and communities abroad."

Pan American Silver president and CEO Michael Steinmann said that when the group bought Tahoe, it made it a priority to reach out and make a constructive proposal to resolve the matter.

“We sincerely hope that this resolution provides some measure of closure for Messrs. Garcia, Garcia Monroy, Perez Martinez and Martinez Sasvin, and that this is a step towards repairing relationships with the broader communities in Guatemala.”

Tahoe has had a strained relationship with communities in Gautemala. The country's Supreme Court suspended Tahoe's licence to operate Escobal in 2017, ruling for an anti-mining organisation that accused the country's Ministry of Energy and Mines of failing to properly consult surrounding Xinca indigenous communities about the project.