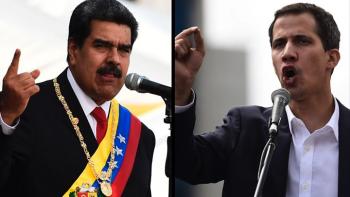 Caribbean leaders are slamming the Trump administration for interfering in Venezuela, with the prime minister of St. Vincent and the Grenadines accusing the U.S. of “carrying out a coup d’ etat,” and Antigua and Barbuda labeling the U.S. recognition of opposition leader Juan Guaidó as president over Nicolás Maduro “a brazen regime change.”

“The majority of countries that are in Caricom do not accept Juan Guaidó as the interim president,” Antigua Prime Minister Gaston Browne told the Miami Herald, referring to the 15-member Caribbean Community. “In fact, we believe that it is an extremely dangerous precedent ... which has absolutely no basis in law, it has no constitutional backing, it has no support of international law, and it’s really an affront to democracy within the hemisphere.”

Browne’s strong stance, along with that of Prime Minister Ralph Gonsalves of St. Vincent and the Grenadines, comes as Venezuela’s political turmoil deepens and the feud between Maduro and U.S. President Donald Trump forces countries in and out of the hemisphere to take sides. On Saturday, U.S. Secretary of State Mike Pompeo is expected to address the United Nations Security Council after asking for a public meeting on the crisis.

Pompeo this week ordered all non-emergency U.S. diplomats in Venezuela to leave. As word began arriving in Caracas, Caricom leaders met in an emergency video-conference call to hash out a statement condemning the recent developments. Among the countries absent from the call: Haiti, which that same day recognized Juan Guaidó as the legitimate president of Venezuela in an Organization of American States declaration.

“The support we gave yesterday to the OAS Declaration is consistent with our position on January 10,” Haiti Foreign Minister Edmond Bocchit told the Herald.

A long time ally of Venezuela, Haiti broke with Maduro earlier this month when it caved to U.S. pressure and joined the U.S, Canada, Colombia and others in publicly condemning Maduro as he began another six-year presidential term. In all, 19 OAS nations voted “not to recognize the legitimacy” of Maduro, who has been accused of conducting a sham election. He was declared the winner by the regime-controlled National Electoral Council.

Four other Caricom nations had also rejected Maduro. But two of them, St. Lucia and Jamaica, changed their position on Maduro, signing onto the Caricom statement expressing concerns about “the increasing volatility of the situation brought about by recent developments,” and reiterating the political bloc’s long-held principle of non-interference and non-intervention in the affairs of sovereign nations.

The statement was signed by 12 out of 15 countries, with Haiti, Guyana and the Bahamas not signing. The Bahamas has indicated it will recognize Guaidó, and Guyana did not take a stance.

“Poor Haiti. They can’t withstand the pressure,” said Gonsalves, who has long been a vocal supporter of Venezuela. “The current president of Haiti is just craving for U.S. protection. That’s all. This guy came to the presidency entirely unprepared.”

Browne, who called the statement “timid,” and believes that the group should have stated its position more forcefully, said a lot of Caricom leaders are operating out of fear.

“Fear should not triumph over principle,” he said. “As small island-states, we must continue to stand on the various principles, the principle of non-interference, and non-intervention as well as respecting the sovereignty of states. ... If we are going to continue to aid and abet these excesses by powerful nations, then the cycle will continue.

“In fact we may even see more brazen interventions into other countries in the Caribbean because it seems to me that the standard we are setting now is, ‘If you do not agree with a regime and you have sufficient power, you can literally appoint a leader.’ I can’t see how anyone can support that principle,” he added. “There are no winners in all of this.”

Though the Caricom communiqué did not make reference to any of the leaders by name, it leaves no doubt that the Caribbean nations disagree with the way in which President Trump and OAS Secretary General Luis Almagro have handled the political crisis in Venezuela. Recent events have only exacerbated it, the statement said, while calling “on external forces to refrain from doing anything to destabilize the situation.”

“Nobody likes what is happening in Venezuela,” Gonsalves said, adding that an escalation of the violence would create further pain and suffering for the Venezuelan people.

Caricom, he said, is not only offering its “good offices to help with peace and dialogue,” but also wants to approach the U.N. because “we are fed up with the OAS and Almagro.”

Late Friday, Caricom Chairman and St. Kitts and Nevis Prime Minister Timothy Harris tweeted that he is “seeking an urgent meeting” with U.N. Secretary-General António Guterres to request its assistance in resolving the Venezuela issue.

“The Americans are carrying out a coup d’ etat in the way they are organizing and manipulating international organizations,” Gonsalves said, citing the OAS specifically. “They are making an error by going to the Security Council tomorrow, the Americans, because they are going to come in for a lot of criticism.”