Cyanide spill in Mexico traced back to Canadian mining company 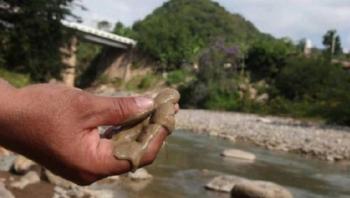 "The damage to the ecosystem has to be evaluated," said environmental activist Sandra Guido. | Photo: NoALaMina.org

Two hundred liters of cyanide solution are polluting the waters of Mexico's Piaxtla River in San Dimas, Durango, where the Canadian Primero Mining Corporation has been drilling for gold and silver reserves.

The toxic spill was caused "by an oversight in the closing of the valve of a pipe that carried remnants of cyanide solution, which remained without fuel in sloping terrain, causing the solution to drain into the Piaxtla River," said the Federal Office of Environmental Protection (Profepa).

On discovering the disaster on March 11, mining company directors alerted the authorities. Federal environmental experts determined a concentrated amount of roughly 100 to 180 mg of cyanide had spilled into the water source and traveled some 250 meters downstream, seeping into the Piaxtla riverbed.

The Environmental Prosecutor said the incident will be evaluated in an inspection report and, if applicable, a corresponding administrative action will be exercised.

"The damage to the ecosystem has to be evaluated, and if there were filtrations to the subsoil – also of the water table – from which communities are supplied. They are not just little fish," said Sandra Guido, executive director of the United Conservation and Voice for the Water (Conselva and Voces Unidas por el Agua).

Communities are worried about mining: most of the region's rivers originate from the Durango and Chihuahua states, where accidents frequently occur. Biased legislation and poor enforcement are among the main causes of such environmental disasters.

"Profepa reports that it does not have enough personnel to cover the entire territory, and generally the mines are in the mountains, so also because of the violence we see it difficult to go up to inspect," Guido said.

Dr. Rodolfo Garcia Zamora, of the Autonomous University of Zacatecas (UAZ), told Economia Hoy: "The Durango spill ratifies the impunity with which mega-mining operates and develops in our country with the false assumption that the investments of the sector would be the key to regional development, of the states and for economic growth."

The Canadian company has been accused of operating irregularities at all six of its Mexican locations, Sinembargo Portal reports. Primero Mining holds a monopoly on Durango's San Dimas gold and silver mines, as well as the Cerro del Gallo gold, silver and copper development project in Mexico and other locations in Canada.

"These people who cause environmental disasters in Mexico do so because it will hardly be sanctioned and, if sanctioned, the punishment or penalty can be easily paid, so that these large corporations can continue to operate, that is, there are no incentives on the part of the federal and local authorities in the application of the law so that the companies stop acting abusively and carelessly," Zamora said.