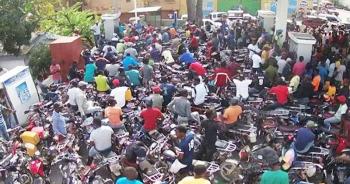 Motorcyclists recently thronging to a gas pump in Port-au-Prince.

In Port-au-Prince, normally bustling streets were empty as the nation is in a “lockdown mode” announced days earlier by several union, trade, and civil society organizations.

As is customary on days of protest, on Mon., Sep. 16 and to a lesser extent, Tue., Sep. 17, major roadways were blocked by burning tires, boulders, dumpsters, and anything capable of impeding traffic. In the developing situation, even small side roads have been blocked. Many citizens are spontaneously doing their part to shut down the city.

Protestors also marched through the streets to demand Jovenel’s resignation. One protestor in the capital was reportedly shot to death by police.

It’s not just in Port-au-Prince. In the nation’s second and third largest cities, Cap-Haïtien and Les Cayes, the movements began Sun., Sep. 15 and escalated as of Monday morning. In Gonaïves, there are thousands in the streets. There they have taken down a massive, over-the-roadway sign that welcomes people into the city. In Jacmel, the movement has taken a more artistic expression in some places.

The movement’s initiators are many and uncoordinated. There was a sense of mulling over whether to hold the lockdown until President Jovenel Moïse resigns, as demonstrators have demanded since the uprising of July 2018, or on the other hand, to lift the lockdown temporarily after a day or two, to resume again later. There were burning tire barricades on Tuesday, but fewer, possibly signaling that this latest uprising will be spasmodic.

One thing is for certain, the situation is critically worsened by a severe gasoline shortage brought on by the administration’s policies. The government owes fuel distributors about $100 million, and they say they won’t resume deliveries until their bills are met. There is no complete payment in sight.

The gasoline crisis has no way of being resolved without a steep hike in gas prices or massive international assistance and supply of fuels. The former would not solve the problem and would exacerbate protests; the latter is expensive, unlikely, and not sustainable.

This article was first published in The Haiti Sentinel. This version has been edited and updated by Haïti Liberté.