Demonstrations condemn U.S. round-ups and deportations of Haitians in Texas 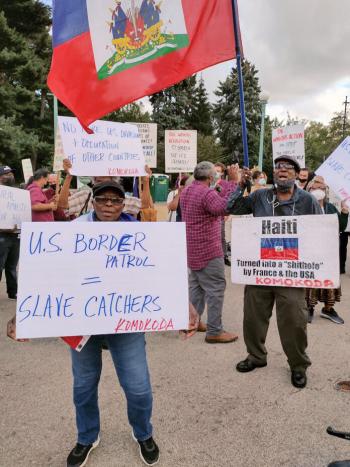 Haitian-Americans and their international allies demonstrated in several U.S. cities this past week to protest against the Biden administration’s aggressive response to the recent arrival of 15,000 Haitians in Del Rio, Texas. The protestors have condemned the arrest, corralling, sequestering, and deportation of hundreds of Haitians in recent days.

Over 20 groups called for a rally on Tue., Sep. 21 at noon in front of the United Nations headquarters in Manhattan, where the annual General Assembly has just begun. Meanwhile the same day at Grand Army Plaza in Brooklyn, Haitian Women for Haitian Refugees, KOMOKODA, Flanbwayan, and UNIA held a rally of a few dozen people from 3 p.m. to 6 p.m..

On Wed., Sep. 22, a coalition of Haitian groups in Miami will hold a rally at the Immigration Building at 8801 NW 7th Ave., North Miami, starting at 1 p.m.. It is organized by a broad coaltion including FANM, Veye Yo, Black Lives Matter, and others.