Despite outcry, U.S. and Dominican governments continue the brutal deportation of Haitians 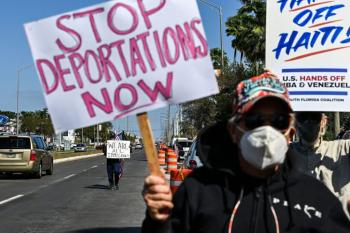 Demonstrators in Florida call for an end to the mass deportation of Haitians.

n September, there was worldwide revulsion over photos of mounted U.S. Customs and Border Protection (CBP) agents in Texas apparently whipping Haitian migrants. The images were reminiscent of slavery. But that did not slow down President Biden’s racist plans for the mass deportation of Haitians. As of this writing in late January, Biden has deported approximately 16,200 Haitians since September and approximately 18,100 since he took office. Biden’s campaign promises to “end Trump’s detrimental asylum policies,” to restore “the dignity of migrants,” and to “uphold their legal right to seek asylum” were all lies.

The expulsions “are obscene” and lack humanity, said Steve Forester, a longtime Miami-based Haitian immigration activist lawyer with the Institute for Justice and Democracy in Haiti (IJDH). “Sending human beings to such conditions — 44% of them are women and children, including infants — dumping them there, it is completely against any notion of humanity.”

Key to the deportations is Biden’s enforcement of Title 42, an immigration measure begun under Trump ostensibly to screen out the COVID positive, but many deportees say that they were never tested. Moreover, those deported from Texas were generally not granted their right to apply for asylum in violation of U.S. and international asylum law under the 1951 Convention Relating to the Status of Refugees and its 1967 Protocol. Nor were they asked about applying for Temporary Protected Status (TPS).

“Haitians who are currently being deported have generally been turned around upon crossing the border, without being given an opportunity to apply for TPS or asylum,” said the Washington Post in a Dec. 30 editorial.

Two of Biden’s own political appointees have quit over his brutal policies. Former U.S. envoy to Haiti, Daniel Foote, condemned the “inhumane” deportations and “catastrophic” U.S. interventions in Haiti when he resigned. Six other high-level immigration officials have announced that they will be stepping down in protest.

Inside Mexico, at both its northern and southern borders, fully 38% of all immigrants requesting asylum to the U.S. are Haitian nationals, making Haitians first in the number of asylum requests in progress. They have been traveling for months or even years, not from Haiti, but from South America: Chile, Brazil, and Argentina, where they faced anti-immigrant hostility as in Mexico. “Remain in Mexico” was a Trump administration policy that sent 71,071 immigrants with U.S. cases to Mexico between January 2019 and January 2021. The policy has continued under Biden.

Haiti today is beset by natural disasters, starvation, catastrophic unemployment, and a pandemic of gang violence. Homicides increased during 2017-2019 by 42% nationwide and by 66% in the nation’s capital, Port-au-Prince, displacing 1.5 million, according to the United Nations. An earthquake last August killed 2,200 and left more than 650,000 in need of emergency assistance. In a nation of 11 million, 4.3 million suffer acute food insecurity. Only one percent have received a COVID vaccine, despite donated supplies.

A kleptocracy with little regard for the masses rules Haiti. A U.S. puppet, de facto Prime Minister Ariel Henry, currently heads the government, nominated to the post by President Jovenel Moïse two days before his Jul. 7, 2021 assassination. A hit squad of 26 former Colombian army commandos (several of whom had received U.S. training) riddled Moïse with 21 bullets in his home. His wife, Martine, survived by playing dead.

Investigations have tied Henry to the murder. The most incriminating evidence are phone logs showing that he received around 4 a.m. (about three hours after the assassination) two phone calls, lasting seven minutes, from Joseph Felix Badio, a former Justice Ministry official alleged to have ordered over the phone the Colombians to kill Moïse.    Police investigators and journalists have also said that Badio has made post-murder nighttime visits to Henry’s home.

Haiti’s top prosecutor, Bed-Ford Claude, sought to question Henry about the evidence linking him to Moïse’s murder, but Henry fired him (and Justice Minister Rockefeller Vincent who refused to terminate Claude) before the hearing in September.

In a Jan. 10 New York Times article, Rodolphe Jaar, a Haitian businessman and former drug trafficker, admitted to helping to finance and plan the plot. He claims to have thought that the operation had U.S. approval and was a kidnapping, not an assassination. “If the U.S. Government was involved, then it was safe” to take part, Jaar told the Times.

Henry stated in August that he would not step down on Feb. 7, 2022, the date Jovenel Moïse’s term would have indisputably ended. Henry says he will remain in power until he hold new national elections, for which the date and electoral council are still pending. Despite widespread popular calls for Henry to resign and a rival coalition which has announced their own transitional president and prime minister, the Biden administration continues to back Henry.

The Dominican Republic has unleashed its own wave of racist deportations of Haitians across the border to Haiti. The DR’s corrupt ruling elite, ever loyal anti-communist U.S. allies, took inspiration from former President Trump’s racist border wall to begin building their own 118 mile fence at a cost of $100 million, a huge expense for a country where the poverty rate is officially 23.4%.

The DR’s rulers have a long tradition of fomenting “anti-Haitianismo” racism. Anti-Haitianismo has been used to divide the Dominican working-class and has resulted in the periodic mass deportation of Haitian workers, accused of “invading” the country and stealing jobs. Anti-Haitianismo also often results in violence. In 1937, Dominican dictator Rafael Trujillo carried out a horrific slaughter of 12,000 (and some estimates are over 35,000) Haitians in a single day near the border. The gangster President was a U.S. Army-trained soldier during the U.S. occupation of the DR (1916-24). Trujillo was reported to have used make-up to lighten his skin color. He  slaughtered thousands of his political opponents while receiving U.S. aid.

Over the decades, mass expulsions of Haitians also meant that dark-skinned Dominicans born in the DR were grabbed in racist dragnets as cops, soldiers, and racist vigilantes hunted for anyone black. The expulsions usually coincided with economic downturns. Moreover, the border is where DR soldiers demand bribes from Haitians seeking to cross, and, is also a focal point for sexual and child trafficking.

Throughout 2021, DR President Luis Abinader, of the center-right Modern Revolutionary Party, implemented a vicious campaign to eradicate “the Haitian migration problem.” About 32,000 people were deported at the end of 2021, almost 35% more than in 2020, according to state sources. The DR government estimates that the country has some 750,000 people of Haitian origin, often working in the DR’s tourist industry, construction sites, and sugar plantations.

In December, the anthropologist and essayist Raúl Zecca Castel, considered an expert on the DR, spoke with Italy 24 News (1/10/22) stating, “the Dominican government has in fact decided to prevent pregnant Haitian women (from six months of pregnancy onwards) from crossing the border, at the same time instructing the country’s medical staff and health facilities to not to welcome and/or assist these undocumented women. The Dominican doctors opposed the order by attaching ethical reasons and so at that point Abinader deployed the police forces – migratory police in the lead – to go and arrest and take pregnant women from hospitals (or who had just given birth), taking them to temporary detention centers from which they can then be deported across the border.”

Italy 24 News further detailed how pregnant women in DR hospitals are seized from their hospital beds and deported.

“A yellow school bus is used to round up Blacks throughout the country. Sometimes the‘truck’ stops outside the health centers and what we have said previously happens: pregnant women or women who have just given birth are loaded onto the bus, crammed like animals, ready to be ‘sent back.’ Every morning at 6 this grotesque bus, which bears the inscription of the General Directorate of Migration (DGM), sets off preceded by a jeep from the police.”

One Haitian woman, Katiana Louis, “was a few days shy of her ninth month of pregnancy when she was deported from the DR last November,” The Haitian Times reported on Jan. 11. “Days after the arduous trip, she lost the baby. The conditions under which Katiana traveled might have affected the death of the baby,” said Philomène Thélémaque, a midwife who examined Louis five days after her arrival in Haiti. Louis, 24, was among 165 pregnant women, out of 800 women total, that the Dominican Republic deported in November 2021.

Over the decades, Washington had issued only the mildest criticisms of the DR’s racist policies, including a tepid U.S. response to the 1937 mass murder, the largest mass murder in history during a single day.

Today, the DR receives “most favored trading status” with the U.S. and is a member of the imperialist initiated Central American Free Trade Agreement (CAFTA-DR), which features wavers on import duties to the lucrative U.S. market. The U.S. and DR also cooperate on regional “security” concerns under the Caribbean Basin Security Initiative, all while Cuba endures a criminal U.S. trade embargo.

After Trump, Where’s the Justice?

U.S. imperialism has propped-up every Haitian dictator, most notoriously the brutal 29-year Duvalier family dictatorship, which ended on Feb. 7, 1986. The CIA-backed coups of 1991 and 2004 twice deposed elected President Jean-Bertrand Aristide. The U.S. military had occupied Haiti from 1915 to 1934, and again during two U.S.-led UN military occupations from 1994 to 2000 and from 2004 to 2019. The 1915 and 1994 occupations were launched by Democratic Party presidents, while the 2004 one was begun by Republican George W. Bush.

The antiwar, anti-racist, and labor movements need to mobilize solidarity with Haiti right here in the belly of the beast to call for:

Asylum rights for Haitian refugees!
Stop the deportations!
No U.S. aid to the Dominican Republic!
No to all U.S./UN intervention in Haiti!

Marty Goodman is a member of Socialist Action