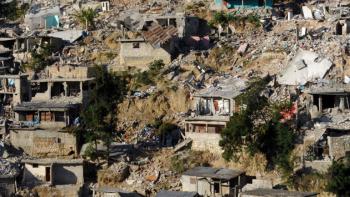 Numerous natural disasters and the complex economic situation have left a big part of the Haitian population starving. The number of people facing food shortages doubled between 2018 and 2019 reaching 2.6 million, or 25 percent of the population, a press release by the European Commission’s Directorate-General for European Civil Protection and Humanitarian Aid Operations said.

According to the latest CIA World Factbook report, Haiti is the poorest country in the Western Hemisphere. Two-fifths of all Haitians depend on the agricultural sector that is vulnerable due to frequent natural disasters. Three-quarters of the population lives on US$2 per day or less.

Recent food shortages in Haiti have caused acute malnutrition among more than 5,000 children under the age of five. The European Commission announced in the press release on Tuesday that it has mobilized €9 million to tackle the food crisis in Haiti.

“‘For the E.U., the humanitarian situation in Haiti is not a forgotten crisis. We are committed to providing vital support to the people hit by the food and nutrition crisis in the country,” the commission said, noting that the aid will cover the basic food and nutritional needs of more than 130,000 people.

For the 2014-2020 period, the E.U. funding allocated for Haiti has reached the highest level in Latin America and the Caribbean. The bloc’s goal is to support development in the country and fight against poverty. According to the European Commission, in order to improve the Haitian economy, funding initiatives need to be focused on strengthening and modernizing public administration, education, urban development, and infrastructure, as well as food and nutrition security.