Differences emerge between the petro-challengers and opposition parties 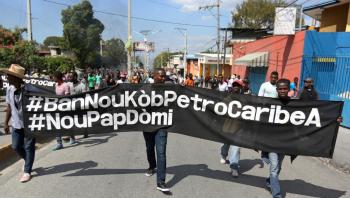 A banner of Nou Pap Dòmi in a Port-au-Prince march earlier this year.

On Jun. 21, 2019 at the Oloffson Hotel in Port-au-Prince, Haitian opposition political parties grouped in the front known as the Democratic and Popular Sector unveiled their “Alternative Consensus for the Refounding of Haiti,” a plan which calls for the removal of President Jovenel Moïse before the end of his term on Feb. 7, 2022 and his replacement by a judge from the Supreme Court with a government composed of ministers drawn from said opposition. The “Alternative Consensus” has apparently allowed the Democratic and Popular Sector to mend fences with the other main opposition coalition, the Forces of the Progressive Opposition (FOP).

Some prominent political figures have voiced their disagreement with the “Alternative Consensus” on secondary grounds, and the Lavalas Family party of former President Jean-Bertrand Aristide continues to have an ambiguous position; some in its leadership criticize the “Alternative Consensus” while others, including the party’s elected officials, are active members in the Democratic and Popular Sector’s leadership.

But clearly breaking with both opposition fronts is the group Nou Pap Dòmi (“We’re Not Sleeping,” in Kreyòl), which is part of the broader sector known as the “Petro-Challengers,” distinguished over the past year for their effective and sophisticated organizing.

Nou Pap Dòmi does not share all the views of the traditional partis and proposes an alternative way out of the political crisis that has gripped Haiti in recent months.

At a Jul. 2 press conference, the group presented a 13 point program called the 4Rs: in French, “Rupture, Redressement, Réorientation et Rigueur” (Rupture, Straightening Out, Reorientation, and Rigor). The post-Jovenel transition should break with traditional “anti-people,”, “anti-democratic,” and “anti-republican,” policies, their document said.

James Beltis, one of Nou Pap Dòmi’s leaders, said in a Jun. 24, 2019 television interview on “Haïti, sa k ap kwit” that his group’s vision of the post-Jovenel transition was more complex than the opposition’s “Alternative Consensus.”

“We are attached to the demands of the street where the people have expressed their refusal to live in a society where crimes remain unpunished, where elected officials do not manage to satisfy the citizens’ desiderata, where the corrupt ones hold power,” he said.

Nou Pap Dòmi in its program writes that “the mission of the transitional government will be defined from a policy of Rupture that is to say Breaking with the past, precisely the anti-democratic, anti-republican practices characterizing the public administration. Restoring social justice, promoting the independence of the judiciary, promoting gender equality, among others things, will determine the dimensions of the Straightening Out. With regard to Reorientation, it will require measures for economic restructuring, redistribution of wealth, revaluation of the national currency, revitalization of wealth-generating activities, promotion of foreign investment according to the Reorientation requirements. The point of Rigor requires the consolidation of public finances, the rationalization of public expenditures, and the commitment against using government action for propaganda purposes.”

In their six-page document, Nou Pap Dòmi stipulates that “the first three months of the transition will lay the groundwork for the holding of the Petro Caribe trial and the creation of a special tribunal capable of judging the corrupt and the perpetrators of financial crimes. There must also be the development of an urgent plan to fight hunger, reform of the 1987 Constitution, strengthen Haitian institutions, decide to declare an environmental emergency, and to carry out and popularize an economic, financial and social diagnosis of the country.

However, not all organizations claiming to be in the Petro-Challenger family are on the same wavelength. Thus Nou Konsyan (We Are Conscious), Nou Pap Konplis (We’re Not Complicit), Popular Challenger, REILA and UEH do not have serious problems with the “Alternative Consensus for the Refounding of Haiti” but they want to keep their distance vis-à-vis the opposition, particularly with regard to this transition’s management. The only role they give themselves is to force the leaders who will carry out the transition to respect their commitment to the nation.

The “Petro-Challengers” called for a mobilization on Sat., Jul. 6 and Sun., Jul. 7, 2019 to commemorate the first anniversary of the popular uprising of Jul. 6-8 of last year, but it was not very successful.

Another radical current of this sector is the Coalition of Petro-Challenger Organizations. In a Jun. 25 note signed by Lavoisier Cherisier Junior, Fritzner Bijoux, Wendy Pierre, Payen Winique, and Myriam Suprien, they demand not only Jovenel Moïse’s departure but that of Parliament as well. They propose that no member of the opposition nor the ruling Haitian Bald-Headed Party (PHTK) should participate in the transition government and that all those leading the transition should be new faces, while underlining that they are for national dialogue, a PetroCaribe trial, and against any foreign interference in Haiti’s internal affairs.

This demarcation of the Petro-Challengers with the opposition parties is necessary and indispensable, but all this will depend on who will have the state apparatus in their hands: will it be the people organized or representatives of the ruling classes?