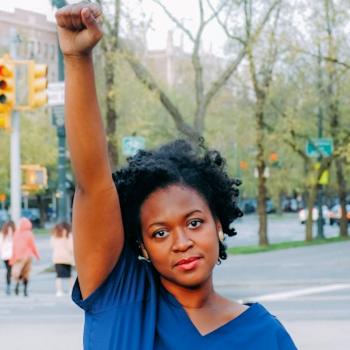 Phara Souffrant Forrest is a socialist Haitian-American nurse and organizer who just won the Democratic primary for a NY State Assembly seat.

As I write this, it has been announced that Kamala Harris will be Democratic Party presumptive presidential candidate Joe Biden’s VP pick. Many people have voiced their pleasure at the sight of a Black woman becoming Vice President. But what does that mean when that Black woman, as California’s Attorney General, had other Black women locked up because their kids skipped school or sent a Black man to prison for a murder he did not commit? Is it really advancement when a Black person wields power and has an impact no different from any white person that held their position?

It makes me think of a Turkish proverb I recently heard:  “The forest was shrinking, but year after year, the trees kept voting for the ax, because the ax was clever and said: vote for me, my handle is made of wood.”

This metaphor rings truer than ever now as local politicians utilize their race and nationality to brand themselves as champions for their people, stringing together empty platitudes filled with buzzwords and no substance. In Kreyòl, we might call it diri san pwa or rice without beans. Rice alone will not nourish you.

Can anyone reading this recall tangible ways the Haitian community has benefitted since Mathieu Eugene came into office as the first Haitian-born New York City Council-member for the 40th District in 2007? Has Assemblywoman of New York State’s 42nd District Rodneyse Bichotte’s renaming of Rogers Avenue as Jean-Jacques Dessalines Boulevard stopped Haitian businesses and people from being pushed out of the Flatbush community? Has U.S. Congresswoman Yvette Clarke’s decades-long reign empowered the Caribbean community as a whole? Has it made our schools any better? Has rent become more affordable?

Obviously, these are rhetorical questions. We all know the answer is “no,”many times over. Local politicians have rocked us to sleep by just flipping a familiar phrase, or greeting us in a dialect familiar to us, while making deals that continue to make our communities more exploited and vulnerable.

To return to the Turkish proverb’s metaphor, the Haitian diaspora is a series of forests deeply rooted in the cities and towns ranging from Boston to Miami, but they are shrinking forests, betrayed by Haitian-American politicians who continue to win our vote based on the flag they wave.

Councilwoman Farah Louis of New York’s 45th District, for example, has been funded by both the New York Police Department and Correction Officer’s unions as well as the real estate industry. When the Police Benevolent Association’s boss said shortly after their endorsement, that NYPD should stand “shoulder to shoulder with ICE”(Immigration and Customs Enforcement), Louis said nothing, and deportations in the community have continued to rise.

In this last election cycle, a Haitian-American nurse from Crown Heights beat Walter Mosely, a moderate Democrat, in the primary for New York State Assembly seat for the 57th District. Coming from a working-class background and organizing with the Crown Heights Tenant Union, Phara Souffrant-Forrest is not far removed from the everyday realities that Haitians and other Black New Yorkers in general deal with in the face of gentrification, high-rents, police occupation, failing public institutions, all with the backdrop of Trump’s racist, anti-immigrant agenda. She supports Medicare for All both at the state and federal level, Universal Rent Control, canceling rent and mortgage payments during the pandemic,  prioritizing housing for all homeless people, defunding the police, and taxing the rich to help pay for it all.

WE HAVE TO MAINTAIN OUR POLITICAL EDUCATION AND AWARENESS AND HOLD THEM ACCOUNTABLE.

As Black people and as immigrants and the children of immigrants, the Haitian-American community is vulnerable in many ways to having to deal with overt racism from a Republican administration on the national level and disingenuous, pump-faking Democrats at the state and local level. Our local politicians should be our first line of defense. However, currently this is not the case. Laurie Cumbo, a councilwoman whose district falls within Souffrant’s state assembly district, recently lamented the rise of Democratic Socialist politicians like Souffrant and Jabari Brisport, another Black Brooklyn native and former teacher who ousted Tremaine Wright for New York State Senate. Cumbo, who is majority leader of the City Council, stated that gentrification was the cause of these wins.

“While we were chanting ‘Black Lives Matter’together,”said Cumbo in a Facebook post “a movement of gentrification was strategizing on how to best unseat Black leadership.”

Aside from the fact that the recent victors who unseated “Black leadership”were Black themselves, there is a deeper irony to Councilwoman Cumbo’s words. With her recent campaigns funded by the likes of real estate developers, pharmaceutical giant Pfizer, and Ladder Capital Finance, a lender which holds $275 million in Trump’s debt, Cumbo’s time in the City Council oversaw a continued trend of large real estate projects, the commencement of privatized public housing, and the displacement of tens of thousands of Black families. By not empowering the communities they represent, Black politicians who preside over Brooklyn’s gentrifying neighborhoods have, for the most part, been complicit in the displacement of working-class (mostly Black) people and the increased influx of middle-class (mostly white) people. How is this possible? Black elites convinced us that because they looked like us, or came from the same countries, that they would have our best interests at heart.

In Haiti, we are familiar with this tactic which has been used historically by the comprador bourgeoisie and is known as “la politique de doublure,”which can be loosely translated as “the policy of a front man.”The ruling class recruits a black face to act as its candidate or agent in an attempt to fool the masses. President Paul Magloire (1950-1956) was a good example of this deceptive type of rule.

While we should encourage political power in the hands of Black, Brown, and Indigenous people, the most important criteria is not only one’s color or ethnicity, it is one’s political analysis and stand in the class struggle. Because at the end of the day, with the understanding that U.S. capitalism upholds white supremacy and does not allow real democracy to thrive, we must undermine it in every arena we can.

Thus, our representatives should have a vested interest in empowering our community and giving us leverage, not as a patron or benefactor whom we applaud everytime they throw out phrases like “unity and strength.”

We have to ask ourselves: to whom are they accountable? We have to maintain our political education and awareness and hold them accountable. We have to hold new Black progressives like Phara Souffrant, Jabari Brisport, Jamaal Bowman (the Democratic Party’s nominee for New York’s 16th congressional district), and others to the same standard.

Again, while Black leadership and representation are important, they alone will not get us to where we need to be. They need to have a vested interest in our collective liberation. Our representatives must lead from the bottom up and their positions must have substance. Besides, who eats rice by itself?