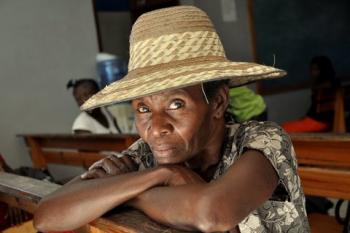 Yesterday (April 23, 2020) this article appeared by the Associated Press—

PORT-AU-PRINCE, Haiti (AP) — A plane carrying 129 migrants who were deported from the U.S. landed Thursday in Haiti amid concerns that the second such flight this month could strain the impoverished country’s limited resources as it fights the COVID-19 disease.

1. So the US deported 129 more Haitians yesterday. How sad and pathetic and unfair. And when one is worried about 129 people stressing Haiti, this news is all the more painful.

2. Sending men and women and kids back to Haiti now on the verge of mass starvation and an impending coronavirus assault on the country is inhumane.

“Authorities whisked the group away in buses and took them to a hotel in the capital of Port-au-Prince, where they joined more than 60 other recent deportees already serving a two-week quarantine.

“Three of the migrants (of the 60 recent deportees) who arrived in early April have tested positive for COVID-19, although so far none in the group that departed San Antonio, Texas on Thursday has a temperature, said Jean Negot Bonheur Delva, director of Haiti’s migration office. The newest group includes 50 children from ages ranging from 5 to 15, he told The Associated Press.”

1. As the above states, several weeks ago, the US deported 60-some Haitians to Haiti and apparently, three of the deportees turned up to be positive for the virus. One of the three positive people allegedly escaped from the hotel and has not been located.

2. I believe Haitians with the virus are afraid not only of the disease but of being persecuted by others for being potential vectors of the virus.

3. So when their two weeks of quarantine are up, these folks will be sent from the hotel back to their neighborhoods and families in Haiti to restart their miserable existence in Haiti with no functioning government and with armed gangs creating chaos and shutting things down even further.

“Bonheur declined to say how much the situation is costing the government as a Miami-based Haitian rights advocacy group called on President Jovenel Moïse to stop accepting deportees and ask that U.S. President Donald Trump place a moratorium on deportations.”

1. So why is the Haitian government accepting these deportees? Why are they allowing the “deportation planes” to land when commercial flights to Haiti have been stopped?

“However, Prime Minister Joseph Jouthe said earlier this week that the country is caring for the deportees.

“They are Haitians. They are coming home. We have to receive them,” he said in an interview Monday with Radio Vision 2000.”

1. Haitians know that these statements from the Haitian government are patently false and that there is no benevolence involved in this matter.

2. Haitians do not trust their leaders and many believe the coronavirus narrative had been made up and that their leaders simply want financial aid from the international community. As of today, there are only 72 confirmed cases of coronavirus out of approximately 500 tested. Haiti has 11 million people and so these numbers, of course, do not represent the true prevalence of coronavirus in Haiti.

3. Haitians are angry that the informal street markets have been closed but that the large textile factories in Port au Prince and in northern Haiti were reopened this week.