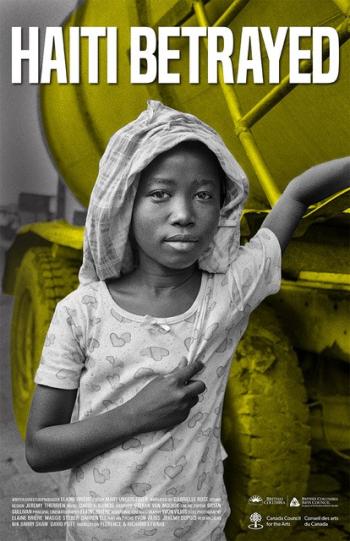 Below is an archive of links & reviews to important documentaries on Haiti. These documentaries are recommended by the editors of the Canada-Haiti Information Project website.

Haiti Betrayed reveals how Canada, once seen by Haitians as a constructive partner, conspired with the United States and France in 2003 to topple the democratically-elected government. Seven years in the making, Elaine Brière’s film meticulously reconstructs Canada’s role in the events that culminated in the United Nations-sanctioned coup d’état on February 29, 2004 and the bloody aftermath that followed.

The violent overthrow of Haiti’s President Jean-Bertrand Aristide in 1991 and 2004 coups has ripped aside the democratic pretensions of US and the other major powers. In 1990, Haiti -the poorest nation in the Western Hemisphere- brought to power Aristide, its first elected president. In September 1991, Jean-Bertrand Aristide was deposed in a bloody military coup orchestrated by the US. He was eventually returned to power by US intervention, only to be overthrown yet again in 2004.

Another Vision: Inside Haiti's Uprising

Another Vision: Inside Haiti’s Uprising portrays a revolution brewing in the slums of Haiti’s capital city, Port-au-Prince. Filmed throughout multiple visits to the island nation, the documentary tells the story of the “Revolutionary Forces of the G9 Family and Allies, Mess with One, You Mess with All” and demonstrates how Haiti’s ruling class is conspiring with the United States to suffocate the revolution before it can begin. (Not yet released)

Canada's Role in Dismantling Democracy in Haiti and the Americas

Truth to the Powerless: An Investigation into Canada's Foreign Policy is a six part documentary series which seeks to explore the role Canada's foreign policy has played in the international arena since the post-World War II era. The docuseries interviews Canadian politicians, activists, dissidents, academics as well as everyday people to get their insight and views on the various foreign policy actions which Canada has been involved in around the world. This documentary series is a non-profit educational resource which seeks to inform as many Canadians as possible about the role of Canada's foreign policy in the international arena.

Haiti: Where Did The Money Go?

Haiti: Where Did the Money Go? is a 2012 Film at Eleven Media production that was produced, written and directed by Michele Mitchell. Shot in the aftermath of the 2010 Haiti earthquake, the documentary looks at what really happens with the money donated to help with disaster aid.

Aristide and the Endless Revolution

The story of the 2004 paramilitary coup d'etat in Haiti against President Jean-Bertrand Aristide and all the elected institutions of the country. The film describes the arming of paramilitaries by the U.S. as well as the aid embargo and 'destabilization' by the U.S., Canada and Europe that preceded the coup.

The story of Cuba's health care mission in Haiti, before and after the 2010 earthquake.

An overview of Haitian-U.S. history, and an examination of exploitation in Haiti’s agricultural and industrial sectors, and its impact on American labour.

Rezistans and Haiti: Killing the Dream

The political events and human tragedy surrounding the 1991 Coup and the dictatorship that followed.

Haiti: We Must Kill the Bandits

The brutal aftermath of the 2004 coup in Haiti, including the essential support role of the U.N. military forces of the MINUSTAH mission that was established in June of that year.