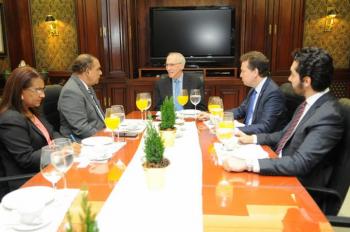 Former Guatemalan diplomat Edmond Mulet (above, center) argued that in Haiti there could be “a new intervention by the United Nations.”

On Nov. 28, 2019 in the Dominican Republic, a forum on Haiti was organized at the Santo Domingo campus of the Santiago-based Catholic Pontifical Mother and Teacher University (PUCMM) entitled “Destabilization of Haiti: Obstacles and Challenges” (Destabilización de Haití: Retos y Desafíos). It was the initiative of a Dominican businessman and politician Víctor Orlando Bisonó Haza, nicknamed Ito Bisonó, president of the Center for Analysis of Public Policies (CAPP), former member of the Social Christian Reform Party and second vice-president of the Chamber of Dominican-Haitian commerce, currently a member of the Chamber of Deputies.

It is disturbing that at this forum neither the Haitian government nor the Haitian opposition were invited to air their point of view. It fell to Deputy Bisonó to describe the country where 6 million of its citizens live on less than $3 a day and 36% live in hunger.

“Such a crisis requires radical action, but those who think that the solution to the Haitian problem is the Dominican Republic are approaching the question badly,” he said. “A middle-income country like ours cannot handle a situation as complex as this one.”

Nonetheless, he urged Dominican authorities and international organizations to take radical measures. “Concrete steps should be taken to build an institutional base in Haiti, aimed at eradicating poverty so that its citizens can live there,” he said.

The conference’s main guest was the former Guatemalan diplomat and head of the United Nations Stabilization Mission in Haiti (MINUSTAH), Edmond Mulet. He expressed concern about the political and social crisis in Haiti and said that, if the Haitian crisis worsens, “it could bring about a new intervention by the United Nations.”

In this vein, Mulet proposed two measures be taken in Haiti.

“The first and most urgent is to assist Haiti to deal with the current humanitarian crisis by mobilizing the necessary forces to guarantee that Haitians can eat,” he said.

Ironically, just after the earthquake nine years ago, when he was MINUSTAH’s chief, Mulet “pooh-poohed the idea that agriculture should take center stage in the country’s reconstruction,” wrote Kim Ives in NACLA. Now the country is struggling to feed itself.

So Mulet now proposes “that the U.S. Southern Command must arrive, by helicopter, with its military forces to settle there, so that it assumes the urgent action required at this time, to give food to all these people,” reported the Dominican Today newspaper.

“We have to act immediately, and I do not see anyone else with the logistical capacity to do it,” Mulet said.

During a breakfast with Miguel Franjul, the director of Listin Diario, Ito Bisonó, and other CAPP members, José Renán Espanhol and Jatzel Román, Mulet presented his vision that the humanitarian crisis in Haiti will trigger hordes of Haitians pouring into the Dominican Republic in search of food and shelter.

“They will go to all the Caribbean countries and reach Florida, the hungry people, and what are we going to do? Are we going to shoot them?” he asked.

He warned that Haiti’s “convulsive situation” represented not only a threat to the Dominican Republic but the entire Caribbean region. He noted that there are 70,000 Haitians with U.S. B1 and B2 tourist visas in the United States, and that there are 200,000 Haitians in Chile, 40 000 in Argentina, and 130,000 in Brazil.

He called on the Dominican Foreign Affairs Ministry to mobilize the international community, to draw attention and ask for help in adopting official initiatives.

The United Nations has the power to promote initiatives, but only at the request of its member states. He said that five UN missions had been installed in Haiti over the past three decades, coming and going while the Security Council thought that the country had been stabilized. This line of reasoning brought Mulet to his second, and principal, point.

“The second thing, very important, that must be done is an international conference on Haiti, which will involve Latin American countries, the European Union, Canada, the United States, France, and Spain, to take decisions,” he said. “We cannot continue like this. We need a new mandate, but an executive mandate, not only for peace and security, and for 20 years.” It appears Haiti’s just-ended 15 year military occupation was not enough for him.

In short, Mulet is calling for Haiti to be returned to colonial status.

Again, he sees this as a job for the U.S. Southern Command, which should establish itself in Haiti, according to Dominican Today.

Established in 1963, the U.S. Southern Command or SOUTHCOM, located in Doral, FL, is one of the Pentagon’s 10 unified Combatant Commands (COCOMs), which “is responsible for providing contingency planning, operations, and security cooperation in… Central America,

South America, [and] the Caribbean (except U.S. commonwealths, territories, and possessions),” its official website states.

Responsible for “the force protection of U.S. military resources” and “ensuring the defense of the Panama Canal,” SOUTHCOM is “comprised of more than 1,200 military and civilian personnel representing the Army, Navy, Air Force, Marine Corps, Coast Guard, and several other federal agencies.”

She wants greater multilateral and entrepreneur involvement in finding a solution to the crisis in Haiti. In particular, she would like to see greater involvement of the European Union and the Organization of American States (OAS).

She said she would be meeting soon with U.S. Ambassador to Haiti Michèle Sison to plan a conference of Haitian and Dominican businessmen. “We need to find ways in which we can contribute to economic prosperity, whether through employment, education, or simply by not turning a blind eye,” she said.

Bernstein joined Mulet in calling for an international conference on Haiti to be held in Miami with the Haitian Chamber of Commerce, representatives of Haiti’s private sector, the Diaspora, the Dominican Republic, and Ambassador Sison .

But Mulet and Bernstein, among others, had virtually nothing to say about the Haitian people’s demands, in particular that Haiti’s sovereignty be respected. They act as if the Haitian people have not been proposing and cannot provide solutions to their own problems.

It is also not surprising that the CAPP conference’s speaker did not take up the Haitian people’s foremost and universal demand: that President Jovenel Moïse resign, so that “system change” can occur that will give birth to a Haiti which is democratic, just, sovereign, and free from corruption and foreign domination.