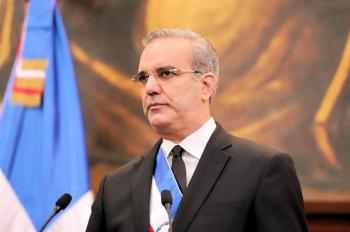 Dominican policemen and soldiers, colluding with mobs and paramilitaries, have stepped up deportations and violence, sometimes deadly, against Haitians in the last three months. Their excuse to the world: Haitian migrants are a “national security threat” to the Dominican Republic.

This line of reasoning has always been a staple of Dominican political discourse, but in recent months the rhetoric and its real world consequences have soared. The demagoguery flows from the highest levels of government. Haitians, President Luis Abinader insists, are overwhelming Dominican schools and hospitals, displacing Dominican laborers, and plotting kidnapping sprees.

His administration produces official statistics and anecdotal evidence of this “low-intensity war” to buttress these claims. The rhetoric has been accompanied by increased police state tactics, including racial profiling, arbitrary arrests, brutal beatings, and inhumane treatment. In the last three months alone, an estimated 50,000 Haitians have been deported, according to the government’s own figures. UNICEF says that includes 1,800 children.

But that number alone does not convey the terror that reigns. Virtually every Haitian in the DR is impacted, even those with valid papers. They are treated like criminals, like animals, like parasites, and worse. Men have been beaten and extorted, women abused and raped, children separated from their parents and traumatized. It is not an exaggeration to compare the violence to pogroms or Germany’s KristallNacht. Haitians are afraid to leave their homes, and they are not safe even there.

Condemned by the United Nations and the United States for human rights abuses, Abinader is defiant. He calls such accusations “unacceptable and irresponsible.” He claims the Dominican Republic has been more supportive of Haitians than any other country, and he talks about the 20,000 Haitians the United States has deported as a sign of its hypocrisy.

Here Abinader has a valid point. In fact, U.S. duplicity runs much deeper than that, and a thorough review of the whole situation would leave both governments with much to atone for. But for now, the U.S. wants to merely take the worst excesses off the table, so that both countries’ egregious behavior stays under the radar of international scrutiny. Anecdotal evidence suggests that the latest U.S. move, to sanction the Dominican Republic’s largest sugar producer in La Romana, may have had some slight softening affect on the treatment of Haitian prisoners and may as well ramify to improve working conditions.

On the broader theme of hypocrisy, President Abinader fails to mention that more than one million Dominicans currently live in the United States, many receiving handsome U.S. government benefits that would read like a fantasy on the island of Hispaniola. Isn’t that a benign precedent that should be considered in the discussion?

More significantly, and what the Dominican government even more conspicuously fails to mention, are the billions of dollars the country reaps by exploiting Haitian labor. In truth, the dependency on Haitian labor goes further than that. It’s not simply that Dominicans don’t want to do the kind of labor Haitians do, they are not physically capable of it. Without abundant amounts of Haitian labor, the Dominican Republic could not function. The DR’s agricultural and construction sectors would be wiped out, while hotels and tourist resorts would be hobbled. This is no doubt the reason Dominican authorities make it relatively easy for Haitians to slip back in.

Take the case of A., a 45-year-old Haitian man who works as a personal aide in the Dominican resort town of Cabarete. Last week, he was arbitrarily arrested, spent three days in various Dominican prison facilities, and then was dropped hundreds of miles away on the other side of the border from Jimani.

An old hand at this, A. knew exactly what to do. He called up a “coyote,” a professional smuggler whose only tools are a van, a cell phone, and a wad of pesos. By pre-arrangement, the coyote passes his clients through various checkpoints until they reach their destination. The cost: about US$170 per passenger. A week after his arrest, A. was back at work in Cabarete.

So what is the point of this charade? The Dominican government finds many advantages. First and foremost, it appeases an angry Dominican populace, which has been led to believe that their poverty is from unfair Haitian labor competition, not class inequity. Secondly, it creates a bribery subsidy for the Dominican military and police forces. Thirdly, it keeps the Haitians off-balance and submissive, a precondition for exploiting their labor. And fourthly, well, for some, it’s a source of prestige and satisfaction to act sadistically.

Dominican politicians have drunk their own Kool-aid and join in on the visceral racism that is the unfortunate legacy of this divided island’s history. One example of this officially rendered nastiness: the cost of a work visa is now US$600, representing more than two months of income for the average migrant worker. (Officially, it’s US$200, but other fees triple the true cost.) This is up from $100 a mere decade ago. The absurd work visa inflation makes a mockery of the good intentions of most Haitians, who would try to follow the rules were that feasible.

Another aspect of Dominican short-sightedness is to deny the children born in the Dominican Republic to Haitian migrants advanced educational opportunities, let alone citizenship. In general, the Dominican government places every conceivable obstacle in the way of Haitians’ progress. Other countries, such as Chile, are already offering training and college courses to Haitian migrants, and these opportunities will increase, especially as the aging of the First World will lead to a growing need for imported labor. Meanwhile, the best and the brightest of the new Haitian generation will seek to build their bright futures elsewhere, not in the Dominican Republic as they used to. Unfortunately, the majority of Haitian migrants will be locked into another cycle of poverty and suffer unnecessarily from the cruel intentions being foisted upon them.

The DR will one day regret having lost these exceptional workers and stunting so many promising lives. Indeed, it will eventually be ashamed to have treated a whole people with so much contempt and hostility that they would not want to return under any circumstances.