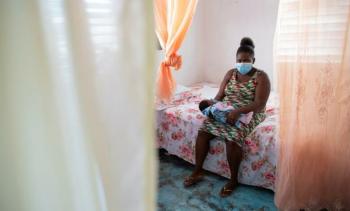 The Dominican Republic’s crackdown on the border with Haiti has had a devastating effect on migrant women desperate to escape their home nation.

In September, the Dominican government enacted a series of laws to curb migration flows from neighboring Haiti, which is caught up in a deep recession, political instability and gang violence.

One of the most controversial measures was the repatriation of pregnant women.

Geralda, who is nine months pregnant, was intercepted on November 10 at La Altagracia maternity ward, where she was getting a prenatal check-up.

She was deported with her 11-year-old daughter, Wislanda, and is now taking shelter at the Support Group for Refugees and Returnees (GARR) in Belladere, Haiti.

But Geralda left her four children and two nephews, aged 5 to 23, behind and they now survive with whatever goods her eldest can sell on the streets.

None of them have documents and they barely speak Spanish even though they have been living in the Dominican Republic for years.

Some deportees attempt to cross the border again with “buscones” (people traffickers) who lead them through less-guarded zones for a price of $200, GARR director Orbé Rigard tells Efe.

The Dominican government has deployed 12,000 soldiers on the border, where a wall is under construction and checkpoints have been erected where border agents scan vehicles for hiding migrants.