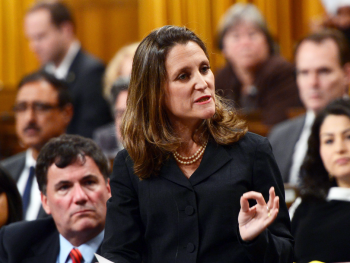 ‘Drain the swamp’ was a popular Donald Trump campaign slogan that referred to reducing the influence of Washington lobbyists. While the three words reflect an extreme lack of ecological consciousness — wetlands need to be protected and recreated, not destroyed — the image of politicians slogging their way through lobbyist infected, tangled, dense vegetation and deep oozing mud is a useful one.

Like the US capital, much of Ottawa was also built on mosquitoes’ favourite habitat and both cities today have an ongoing pest problem: blood sucking influence peddlers swarming the countries’ decision makers. That image helps explain why there is little deviation from Canada’s official foreign policy positions even amongst social democratic members of Parliament.

The recently re-established Canada-Palestine Parliamentary Friendship Group (CPPFG) offers a window into the dearth of opposition, notably from the NDP, to the foreign policy establishment. Chaired by Liberal MP Marwan Tabbara, CPPFG has nine MPs representing all the parties in the House of Commons except the Conservatives. But, CPPFG isn’t one of 17 official parliamentary associations or groups so it doesn’t receive public financial or administrative support, unlike the Canada-Israel Interparliamentary group.

In an equitable world the Palestinian parliamentary group — not the Israeli one — would be subsidized to offer MPs a counterpoint to Canada’s pro-Israel ideological climate. Supporters of Israel have established a slew of programs at high schools and universities, as well as media ‘flak’ organizations and advocacy groups, to promote that country’s viewpoint. Additionally, the dominant media favours the Israeli perspective and the Centre for Israel and Jewish Affairs is among the most aggressive lobbyists on Parliament Hill so MPs are not lacking for access to this outlook.

The Israel vs. Palestine parliamentarian bodies offer a unique window into how international power relations are reflected in House of Commons associations. But, the parliamentary association system more broadly reflects inequities in global power and wealth.

Nearly half the 17 associations that share a $4.5 million public envelope are focused on Europe. There is a Canada-Europe Parliamentary Association and an associated Canadian Delegation to the Organization for Security and Co-operation in Europe Parliamentary Assembly as well as country-specific groups for France, Germany, Italy, Ireland and the United Kingdom. Alongside Canada’s European G7 allies, there are Japan and US parliamentary associations.

Though it is a competitor to the US-led geopolitical order, China’s economic might warrants a parliamentary group. There are also associations promoting the Francophone and Commonwealth, which are rooted in European colonialism (previously it was called the Empire Parliamentary Association).

The only two associations focused on the Global South are the Canadian Section of ParlAmericas Bilateral Associations, representing 35 countries in the Western hemisphere, and the Canada-Africa Parliamentary Association, representing 53 countries on the continent. (As is usual with Africa-related bodies, that association’s mission statement includes ‘benevolent Canada’ paternalism. It says “Canadian parliamentarians also have the opportunity to witness the local impact of programs funded by the Canadian International Development Agency (CIDA) and to learn about Canada’s efforts in Africa from Canadian officials in the field.”)

Another way the Ottawa swamp forms MPs’ international views is through events and parties put on by diplomats. In The Blaikie Report long time NDP defence and foreign critic Bill Blaikie describes “enjoying many fine evenings” at the home of the British High Commissioner. Wealthier countries are more likely to have representation in Ottawa and have greater capacity to organize events promoting their country’s international positions.

Sometimes connected to diplomatic postings in the capital, MPs regularly travel on international trips organized and paid for by third parties. While the Globe and Mail has recently devoted significant attention to China sponsored trips, Israel and Taiwan have long been the principal destinations. A 2014 calculation found that a quarter of all federal MPs had been to Israel with an Israeli nationalist organization.

Opposition MPs are absorbed into the foreign policy establishment in other ways. At the start of year B.C. NDP MP Wayne Stetski participated in a House of Commons Standing Committee on Foreign Affairs and International Development mission to Ukraine, Latvia, Poland and Kazakhstan while last month Tom Mulcair went on a Committee mission to Beijing, Hong Kong, Hanoi and Jakarta. Last year NDP foreign critic Hélène Laverdière traveled to Israel with representatives of the other parties and in 2014 then NDP foreign critic Paul Dewar joined foreign minister John Baird and Liberal MP Marc Garneau on a visit to Iraq. Global Affairs Canada and diplomats in the field usually organize these visits.

The Canadian Group of the Inter-Parliamentary Union and the Canadian NATO Parliamentary Association are the final officially recognized parliamentary associations. A presentation at a NATO meeting convinced Bill Blaikie to support the organization’s bombing of the former Yugoslavia in 1999. “I myself”, Blaikie writes, “had been affected by the presentation at a 1998 NATO parliamentary meeting in Barcelona of an Albanian woman from Kosovo, who tearfully pleaded for an intervention to stop the anticipated wholesale slaughter of Kosovar Albanians.”

No official parliamentary association is devoted to de-militarization.

Beyond the NATO Parliamentary Association, MPs are drawn into the military’s orbit in a variety of other ways. Military officials regularly brief MPs. Additionally, the slew of ‘arms length’ military organizations/think tanks I detail in A Propaganda System: How Government, Corporations, Media and Academia Sell War and Exploitation speak at defence and international affairs committee meetings.

The Canadian Forces Parliamentary Program is, according to the Globe and Mail, a “valuable public-relations tool.” Set up by the Department of National Defence’s Director of External Communications and Public Relations in 2000, the Parliamentary Program embeds MPs in military training (Army in Action or Experience the Navy). According to the Canadian Parliamentary Review, the MPs “learn how the equipment works, they train with the troops, and they deploy with their units on operations. Parliamentarians are integrated into the unit by wearing the same uniform, living on bases, eating in messes, using CF facilities and equipment.” As part of the program, the military even flew MPs to the Persian Gulf to join a naval vessel on patrol.

Alongside the military, the arms industry lobbies MPs. Lockheed Martin’s name appeared 39 times in a “12-Month Lobbying Activity Search” of the Office of the Commissioner of Lobbying of Canada. CAE, General Dynamics, Raytheon, BAE and Airbus Defence were also listed dozens of times in the lobbyist registry. The Canadian Association of Defence and Security Industries has four registered lobbyists in Ottawa. Many of CADSI’s 800 members are also part of the Canadian Manufacturers & Exporters, Council of Chief Executives, Canadian Chamber of Commerce or Aerospace Industries Association of Canada. These groups also promote militarism and a pro-US foreign policy to government officials, though rarely do they speak in favour of withdrawing from military alliances or bucking Washington on an international issue.

Other corporations with international interests also have a significant presence on Parliament Hill. In a high-profile example, registered lobbyists representing Barrick Gold, Vale Canada, IAMGOLD, Goldcorp, Mining Association of Canada and Prospectors and Developers Association of Canada launched a ferocious campaign in 2010 to derail An Act Respecting Corporate Accountability for the Activities of Mining, Oil or Gas Corporations in Developing Countries (Bill C300), which would have restricted some public support for firms found responsible for significant abuses abroad.

The corporate/military/Global Affairs nexus predominates on foreign policy because there is little in terms of a countervailing force in Ottawa. Non-Governmental Organizations are sometimes considered critics of Canadian foreign policy, but NGOs are not well placed to challenge the federal government. Reliance on government aid and charitable status hampers their political independence.

On many domestic issues organized labour represents a countervailing force to the corporate agenda or state policies. But, unions rarely lobby MPs on international affairs.

The influence peddlers in the Ottawa foreign policy swamp represent a narrow range of interests.

So how do Canadians who want this country to be a force for good in the world effect change? Step one is to understand the system, then challenge the foreign policy establishment’s grip in Ottawa.