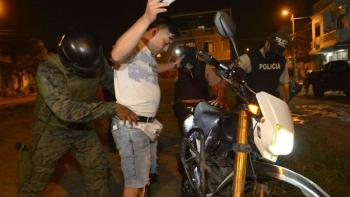 Ecuador's President Guillermo Lasso declared a state of exception in two provinces Tuesday, after at least five police officers were killed and prison guards taken hostage in the latest wave of attacks in the deadly gang war consuming the country.

The state of exception and nightly curfew in the coastal provinces of Guayas and Esmeraldas will be in place for 45 days, and allows the government to limit freedom of assembly and movement.

Officials said organized crime groups launched at least 13 attacks with explosives and firearms against police and oil installations in response to a transfer of inmates from Guayas 1 prison. The prison authority also reported that "shots were fired inside" the facility.

Located in the southwestern port city of Guayaquil in Guayas province, the prison was one of the main scenes of a series of prison massacres that have left about 400 inmates dead since February 2021.

Interior Minister Juan Zapata told reporters in the Ecuadoran capital of Quito on Tuesday there were "reactions (of) organized crime" in Guayaquil and in the northwestern oil port of Esmeraldas.

These incidents included car bomb attacks and an explosion at a bus terminal.

Three more officers were gunned down later in the day in the port and the nearby city of Duran.

A separate attack on a police station there left two officers injured.

In Esmeraldas — the same city where two headless bodies were found hanging from a pedestrian bridge on Monday — inmates took eight guards hostage, according to the SNAI prison authority.

All were later freed, the prison authority said, without giving details about the guards' condition.

A video circulating on Twitter appeared to show two guards with explosives tied to their bodies and a man claiming to be an inmate denouncing what he called prison corruption. AFP could not independently verify the video.

The SNAI had earlier announced on Twitter that it was moving about 200 inmates from Guayas 1 — transfers that were necessary due to required maintenance to cell blocks.

But according to the purported hostage video, the move was because of events at Esmeraldas.

"Given the events in Esmeraldas and GYE (Guayaquil), we activated our tactical and investigative units to maintain order and find the perpetrators," the police said on Twitter.

The education ministry suspended classes Wednesday in Esmeraldas province's capital of the same name, while President Lasso also canceled a planned trip to the United States.

He said he will lead a central command post in Guayaquil following the wave of violence, and added that police "will intensify their operations."

"These acts of sabotage and terrorism are... a declaration of open war against the rule of law the government, and against all of you, the citizens," the president said in an address broadcast on radio and television.

"Today, narco criminals feel uncomfortable and they express their discomfort with violence," he added.

Ecuador — once a relatively peaceful neighbor of major cocaine producers Colombia and Peru — has seen a wave of violent crime that authorities blame on turf battles between rival drug gangs believed to have ties to Mexican cartels.

With the proliferation of organized crime, some local gangs, such as the Lobos and Los Tiguerones, morphed into micro-cartels.

Both gangs work with Mexico's Jalisco New Generation cartel, and have been responsible for deadly prison riots. The Department of Justice considers the Jalisco cartel "one of the five most dangerous transnational criminal organizations in the world." The cartel's leader, Nemesio Oseguera, "El Mencho," is among the most sought by Mexican and U.S. authorities.

Hundreds of inmates have been killed — many beheaded or incinerated — as the fighting spilled into Ecuador's hugely over-populated prisons.

Civilians have increasingly been caught up in the bloodshed, which has included a spate of car bombs, while the violence has also claimed 61 police lives since last year.

Ecuador has gone from being a drug transit route in recent years to an important distribution center in its own right, with the United States and Europe the main destinations.