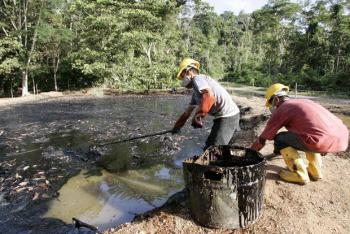 Workers clean up a contaminated pool in Ecuador in 2007. Roughly 47 plaintiffs representing about 30,000 villagers trace their legal action to 1993, when they first sued Texaco, later bought by Chevron, for pollution of 1,500 square kilometres of rain forest in northern Ecuador. GUILLERMO GRANJA /REUTERS

Ecuadorian villagers are set this week to try again to hold Chevron Canada legally liable for a huge award against the oil company’s U.S.-based parent for what they say are the serious health effects they suffered from devastating environmental pollution decades ago.

The villagers will be asking Ontario’s top court to upend an earlier ruling that they cannot go after the Canadian company for the US$9.5-billion award they won in Ecuador against Chevron Corp.

The hearing on Tuesday and Wednesday before the Ontario Court of Appeal is the latest tangle in the intense, take-no-prisoners litigation – and public relations war – fought over years and in several countries. However, it could also prove fatal to the Ecuadorian attempt to involve Canada in the protracted battle in which both sides accuse the other of acting criminally or playing legally and ethically dirty tricks.

The appeal turns on a judgment from January 2015 when Superior Court Justice Glenn Hainey threw out the villagers’ case on the basis that Chevron Corp. and Chevron Canada are two distinct entities, and that the latter can’t be held liable for the debts of the former. The plaintiffs, in other legal words, could not “pierce the corporate veil,” Hainey ruled.

In their written arguments before the Appeal Court, the Ecuadorians call that premise absurd. They maintain Chevron Corp. has collected more than US$25-billion in dividends from its wholly owned operating subsidiaries, including Chevron Canada.

Chevron, with 1,500 subsidiaries and $225-billion annual revenues, insists the Ecuadorian judgment should not be honoured under any circumstances.

“The Ecuadorian judgment was obtained by fraud from a corrupt legal system, including by the bribing of the trial judge,” the company says in its factum. “It would be contrary to Canadian public policy and natural justice to recognize and enforce the Ecuadorian judgment.”

Even if the award were valid, the company argues, Hainey was correct to rule it could only be enforced against Chevron Corp. and not the Canadian subsidiary, which no one accuses of wrongdoing in Ecuador.

Roughly 47 plaintiffs representing about 30,000 villagers trace their action to 1993, when they first sued Texaco, later bought by Chevron, for pollution of 1,500 square kilometres of rain forest in northern Ecuador that fouled streams, drinking water and garden plots.

They ultimately won their US$9.5-billion judgment in 2013. However, Chevron no longer has assets in the South American country, prompting the villagers to pursue enforcement in several other countries, including Canada, so far to no avail.

The Canadian action, which began in 2012, aims to have Chevron Canada pay the award on the basis that a company cannot hide behind a subsidiary to avoid its creditors.

In an earlier round of the legal battle, the Ontario Appeal Court and the Supreme Court of Canada recognized the region in which the “poor and vulnerable” Ecuadorians live has suffered extensive environmental pollution that seriously disrupted their lives. Those courts also ruled the Ecuadorians could pursue their claim in Canada, although Hainey’s summary judgment – if upheld after this week’s hearing – could effectively spell the end of that effort.

As part of their attempt to at least win in the court of public opinion, the Ecuadorians planned a news conference in Toronto on Monday to make the case that the villagers are standing up for communities around the globe against powerful and polluting multinationals.

The villagers maintain the region has seen higher rates of cancer and other illnesses due to the pollution. They also say the award – if they ever collect it – would be put in trust and used to remediate the lands and water, and improve their health conditions.

For its part, Chevron argues the villagers’ health concerns are unproven or vastly overstated, and that any quarrel they might have about polluted lands should be with the Ecuadorian government and the country’s national oil company.