Election interference is not unique to Russia -- U.S. and Canada have done it, too 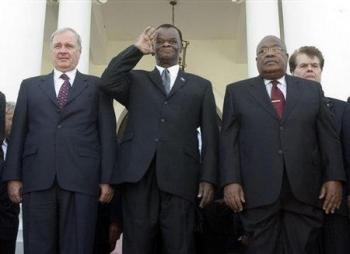 If a guy does something bad to someone else, but then complains later when another person does that same thing to him, what do we say? Stop being a hypocrite. Either you change tact or you got what you deserved. Does the same moral logic apply to countries?

Interference in another country's election is an act of aggression and should not happen in a just world so these accusations deserve to be aired and investigated. But, how can one take the outrage seriously when the media commentators who complain about Russia ignore clear-cut Canadian meddling elsewhere and the decades-long history of U.S. interference in other countries' elections around the world, including in Canada.

Ottawa has interfered in at least one recent Ukrainian election. Canada funded a leading civil society opposition group and promised Ukraine's lead electoral commissioner Canadian citizenship if he did "the right thing" in the 2004-05 poll. Ottawa also paid for 500 Canadians of Ukrainian descent to observe the elections. Three years after Globe and Mail reporter Mark MacKinnon explained: "[Canadian ambassador to the Ukraine, Andrew Robinson] began to organize secret monthly meetings of western ambassadors, presiding over what he called "donor coordination" sessions among 20 countries interested in seeing Mr. [presidential candidate Viktor] Yushchenko succeed. Eventually, he acted as the group's spokesman and became a prominent critic of the Kuchma government's heavy-handed media control. Canada also invested in a controversial exit poll, carried out on election day by Ukraine's Razumkov Centre and other groups that contradicted the official results showing Mr. Yanukovich [winning]."

Canada has also interfered aggressively in Haitian elections. After plotting, executing and consolidating the 2004 coup against Jean Bertrand Aristide's government, Canadian officials interceded in the first election after the coup. In 2006 Canada's then-chief electoral officer, Jean-Pierre Kingsley, led a team of Canadian observers to Haiti for elections that excluded the candidate -- Father Gérard Jean Juste -- of Haiti's most popular political party Fanmi Lavalas. With the country gripped by social upheaval after widespread fraud in the counting, including thousands of ballots found burned in a dump, Kingsley released a statement claiming, "the election was carried out with no violence or intimidation, and no accusations of fraud." Chair of the International Mission for Monitoring Haitian Elections, Kingsley's statement went on to laud Jacques Bernard, the head of the electoral council despite the fact that Bernard had already been widely derided as corrupt and biased even by other members of the coup government's electoral council.

In the 2010 election Ottawa intervened to bring far-right president Michel Martelly to power (with about 16 per cent of the votes, since the election was largely boycotted). Canada put up $6 million for elections that excluded Fanmi Lavalas from participating. After the first round, our representatives on an Organization of American States Mission helped force the candidate the electoral council had in second place, Jude Celestin, out of the runoff. The Center for Economic and Policy Research explained, "the international community, led by the U.S., France, and Canada, has been intensifying the pressure on the Haitian government to allow presidential candidate Michel Martelly to proceed to the second round of elections instead of [ruling party candidate] Jude Celestin." Some Haitian officials had their U.S. visas revoked and there were threats that aid would be cut off if Martelly's vote total wasn't increased as per the OAS recommendation.

Half of the electoral council agreed to the OAS changes, but half didn't. The second round was unconstitutional, noted Haïti Liberté's Kim Ives, as "only four of the eight-member Provisional Electoral Council (CEP) have voted to proceed with the second round, one short of the five necessary. Furthermore, the first round results have not been published in the journal of record, Le Moniteur, and President Préval has not officially convoked Haitians to vote, both constitutional requirements."

The absurdity of the whole affair did not stop the Canadian government from supporting the elections and official election monitors from this country gave a thumbs-up to this farcical exercise in "democracy." Describing the fraudulent nature of the elections, Haiti Progrès explained "the form of democracy that Washington, Paris and Ottawa want to impose on us is becoming a reality."

Washington has, of course, interfered in hundreds of elections in dozens of countries, including Italy, France, Greece, Chile, Ecuador, Vietnam, Dominican Republic, Australia and, yes, Canada.

You haven't heard about that one?

During the 1962 Cuban Missile Crisis the Kennedy administration wanted Ottawa's immediate and unconditional support in putting the North American Aerospace Defense Command (NORAD) on high alert. Diefenbaker hesitated, unsure if Washington was telling him the full story about Soviet/Cuban plans or once again bullying the small island nation.

Not happy with Diefenbaker's attitude during the Cuban Missile Crisis or his ambivalence towards nuclear weapons in Canada, President John F. Kennedy worked to precipitate the downfall of his minority Conservative government. Kennedy preferred Lester Pearson's Liberals who criticized Diefenbaker on Cuba and were willing to accept nuclear-armed Bomarc missiles.

"In the fall of 1962," notes Peter McFarlane in Northern Shadows: Canadians and Central America, "the State Department began to leak insulting references about Diefenbaker to the U.S. and Canadian press." Articles highly critical of the Canadian prime minister appeared in the New York Times, Newsweek and other major U.S. media outlets. On January 3 the outgoing commander of NATO, US General Lauris Norstad, made a surprise visit to Ottawa where he claimed Canada would not be fulfilling her commitments to the north Atlantic alliance if she did not acquire nuclear warheads. Diefenbaker believed the US general came to Canada "at the behest of President Kennedy" to set the table "for Pearson's conversion to the United States nuclear policy."

A future prime minister, Pierre Trudeau, concurred. He asked: "Do you think that General Norstad, the former supreme commander of allied forces in Europe, came to Ottawa as a tourist on January 3 to call publicly on the Canadian government to respect its [nuclear] commitments? Do you think it was by chance that Mr. Pearson, in his speech of January 12, was able to quote the authority of General Norstad? Do you think it was inadvertent that, on January 30, the State Department gave a statement to journalists reinforcing Mr. Pearson's claims and crudely accusing Mr. Diefenbaker of lying?...you believe that it was by coincidence that this series of events ended with the fall of the [Diefenbaker] government on February 5?"

A State Department official, Willis Armstrong, described Kennedy's attitude towards the March 1963 Canadian election: "He wanted to intervene and make sure Pearson got elected. It was very evident the president was uptight about the possibility that Pearson might not win." Later Kennedy's Secretary of State Dean Rusk admitted, "in a way, Diefenbaker was right, for it was true that we preferred Mike Pearson."

During the 1963 election campaign Kennedy's top pollster, Lou Harris, helped Pearson get elected prime minister. Kennedy backed Harris' move, though he opposed an earlier request for the pollster to help British Labour leader Harold Wilson, which Harris then declined. Since Harris was closely associated with the US president the Liberals called Kennedy's pollster by a pseudonym.

Washington may have aided Pearson's campaign in other ways. Diefenbaker wondered if the CIA was active during the 1963 election while External Affairs Minister Howard Green said a U.S. agent attended a couple of his campaign meetings in B.C.

The lesson? Perhaps Washington and Ottawa should treat other countries in the same way they wish to be treated. Perhaps it is time for a broader discussion about election meddling.