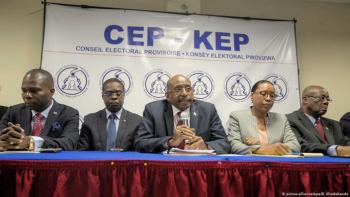 This week’s mass resignation of Haiti’s Provisional Electoral Council (CEP) will inexorably lead to the fall of President Jovenel Moïse and his replacement by a provisional government, according to a former CEP member, lawyer Jaccéus Joseph, who represented the Human Rights sector on the nine-member body in 2015 under the leadership of Pierre Louis Opont.

The collective quitting of the remaining eight CEP members, effective Jul. 27 (one had already stepped down on Jul. 3) was sparked by a letter from Moïse to the different civil sectors which appoint council members, demanding that they either confirm or replace their representatives in four days.

“They were shocked and deceived by President Moïse’s letter, which he sent without telling them anything, while they thought they had a guarantee from him that they would remain on to carry out the next election,” Jaccéus explained to Haïti Liberté in an extended interview.

MOÏSE HAS FAILED TO HOLD LEGISLATIVE AND MUNICIPAL ELECTIONS SINCE TAKING OFFICE ON FEB. 7, 2017

Earlier in July, the CEP had even submitted to Moïse a “pre-draft” (Avant Projet) electoral decree, revising that formulated in 2018.

Already, Moïse has failed to hold legislative and municipal elections since taking office on Feb. 7, 2017, resulting in Parliament’s dissolution on Jan. 13 and the expiration of mayors’ and town councils’ terms this month. Ruling by decree, Moïse has simply appointed his own agents to run things, even at a local level.

There is also huge controversy over whether Moïse must step down on Feb. 7, 2021 or Feb. 7, 2022, due to contradictory clauses in the Haitian Constitution.

Haiti’s opposition groups argue that Moïse must go in 2021. The Democratic and Popular Sector’s leader, lawyer André Michel, the most outspoken opposition figure, cites the Constitution’s Article 134.2, which states that, even if elections are not held on schedule before Feb. 7,  “the President-elect takes office immediately after the validation of the ballot and his term of office is deemed to have started on Feb. 7 of the year of the election.” Moïse was very controversially elected on Nov. 20, 2016, so his five-year term technically started, according to this article, on Feb. 7, 2016.

In the course of this bitter power struggle, exacerbated by the Covid-19 pandemic, “Jovenel Moïse realized that nobody would accept an election by these CEP members, because they had already delivered a rigged election in 2016,” Jaccéus explained. “So he tried to entrap the sectors they represent by giving the sectors only four days to approve their representatives. But he did this without the consent of those CEP members, so they all resigned.”

Jean Simon Saint-Hubert, the Human Rights sector’s representative, had already resigned three weeks earlier following denunciations and demonstrations by popular organization and human rights groups because “his name and reputation were mud after his heinous collaboration with the PHTK which allowed it to get its drug-dealers into the Parliament and the Presidential Palace,” Jaccéus said.

“Today our country is facing a serious political and institutional crisis, leading to serious economic, social, and security consequences,” the CEP members wrote to Moïse on Jul. 24. “While recognizing the urgency of normalization, it seems essential to us to prioritize the dialogue between the main actors of power, of the opposition, and of civil society in order to reach an appropriate consensus. This inevitable step is necessary to achieve a viable solution capable of curbing the current crisis. It is also a prerequisite for the reliability and success of an inclusive electoral process… In order to facilitate this development, the undersigned, Members of the Provisional Electoral Council, have voluntarily decided to submit their resignation to you, which will take full effect on Mon., Jul. 27, 2020.”

“A CRISIS PERIOD HAS BEGUN. NO POLITICAL ACTORS WILL NOW AGREE TO GO INTO ELECTIONS UNDER JOVENEL.”

“This is the end of Jovenel Moïse,” Jaccéus said, “A crisis period has begun. No political actors will now agree to go into elections under Jovenel. His mandate ends next year. Psychologically, everybody is ready to do anything necessary to make sure he does not remain as head of state, where he was never legitimate. There is no doubt we are heading into a transition. It can go two ways. On the one hand, the PHTK might try to control the transition, just as they did with President Jocelerme Privert in 2016, so that the PHTK can retain power. On the other, there has been a tremendous popular mobilization to get rid of Jovenel and the PHTK over the past two years. This may allow a more radical transition, which can resolve various social problems, even if not profoundly, and put in place safeguards to prevent patently rotten individuals from returning to power…. So we could see a provisional government which emerges from the cries of the people who have been in the streets demanding change. I’m speaking in the framework of liberal democracy, not fundamental change. But that might guarantee a minimum of political stability, which you couldn’t have done with the CEP that just resigned.”

Despite years of massive demonstrations demanding his resignation, Jovenel Moïse may now be facing his most serious political trial ever. The Covid-19 pandemic, which curtailed the weekly outpourings of demonstrators, is apparently ebbing in Haiti, at least for now. Inflation is raging at more than 23% over the past year. Armed groups in Haiti’s vast shantytowns, now hostile to him, are seeking unity. Hunger is more prevalent than ever.

The resignation of Léopold Berlanger’s CEP, as reviled as it was, may prove to be the straw that broke the camel’s back, even though its members had reaped millions of dollars in salaries and benefits over the past five years and their act of stepping-down “was not sincere or in good faith,” according to Jaccéus.