Exhibition on Haiti four years after the earthquake 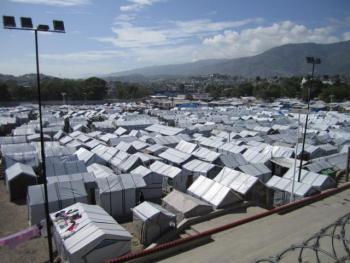 'Fragments' is a powerful new exhibit that glimpses into Haitian life four years after the earthquake and asks, what happened? At the Anthropology Museum at Northern Illinois University, November 2013 to March 2014.

Haiti's earthquake was one of the top five deadliest disasters in the contemporary world, claiming between 65,000 and 316,000 lives. Haiti's disaster was also arguably the most mediatized in modern history. Media images highlighted the exceptional, macabre, and gruesome. Many of these accounts dehumanized Haiti and Haitian people, while focusing disproportionate attention on the good intention and generosity of humanitarian actors. International media attention helped raise $5.6 billion in official funds for the first two years following the earthquake.

What happened? Where did the money go? Three and a half years following the earthquake, international media attention on Haiti has diminished. Living conditions have only improved slightly and are still among the worst in the world. One index of the collective failures shows that 325,000 people are still living under tents in scores of camps across Haiti.

Fragments: Haiti Four Years After the Earthquake, an exhibit from the Anthropology Museum at Northern Illinois University, aims to answer these questions. Based on the activist anthropology of NIU Professor Mark Schuller and his book Killing with Kindness: Haiti, International Aid, and NGOs, the exhibit will be open from November 2013-March 2014. Fragments will also serve as the catalyst for inviting experts from around the world to discuss Haiti's contemporary realities and underlying issues. The installation is called Fragments to acknowledge the often disparate lived realities now in relative shadows.

A traveling portion of Fragments will be on display at the Field Museum of Natural History in Chicago to coincide with the American Anthropological Association conference, as well as a conference organized by Northern Illinois University on the Future of NGO Studies. After the exhibit's run at the Anthropology Museum at NIU, Fragments will travel the country raising awareness of the continued issues and activism in Haiti since the earthquake in 2010.

Visitors to the exhibit will begin by walking through rubble, representing the "tremors felt round the world." Installation components will include a wind and sun battered tent and tarp house and a reconstructed cinder block house. To demonstrate the increasing risks of forced eviction, the installation also includes the charred remains of a tent from an act of arson by armed paramilitaries in a recent case of forced evictions. One empty plastic water bottle will be collected and displayed to represent each of the over 8,000 lives lost since cholera was introduced to Haiti after the earthquake, a disease accidentally brought by United Nations troops in October 2010. Exhibit panels will explore the life histories and living conditions of several Haitian women and men living "under the tents." Visitors will also be introduced to Haitian activists trying to make a difference and be empowered to take action on issues relating to cholera, forced eviction, housing rights, and aid accountability.

Fragments will be available for travel to other museums or institutions after its initial run at the Anthropology Museum at Northern Illinois University. You can help us tell this story. Your donation to Fragments: Haiti Four Years After the Earthquake allows the Anthropology Museum at Northern Illinois University to pay for the staff, research, fabrication, installation, programming, and shipping costs of organizing this powerful exhibit on Haiti and disaster relief.

Read about the exhibition and the appeal to help fund it on Indigogo. For more information, contact Mark Schuller, Assistant Professor Anthropology and NGO Leadership and Development, Northern Illinois University, (815) 753-2424, mschuller@niu.edu.