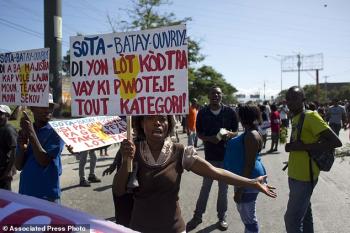 Police fired tear gas for a second day Thursday in attempts to break up protests by striking workers demanding pay increases at an industrial park in Haiti's capital.

The workers employed at factories that produce textiles and other goods said they make 500 gourdes ($5) a day for nine hours of work and are seeking a minimum of 1,500 gourdes ($15) a day. Their demands come as Haiti has seen a sharp rise in inflation.

“Poor people can’t do anything with this miserable salary,” said Similien Luckgelson, one of the workers who joined the protest near the international airport in Port-au-Prince.

Strikers used burning tires to block a main road, and police tried to disperse the crowd with tear gas. But demonstrators persisted, ultimately gathering in front of an industrial park that employs them and was shuttered on Thursday.

He said workers will protest again next week if they don’t receive an increase in wages.