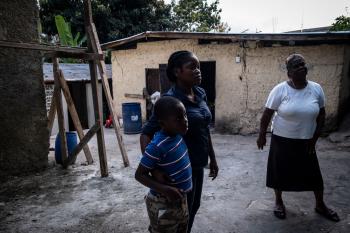 At two stories tall, her house towers over those clustered around it, where her brothers, sisters, children and grandchildren live. But she’s not yet living in her house. It’s just a cement skeleton on top of the footprint of the home she lived in until it collapsed Jan. 12, 2010, in one of the deadliest earthquakes in world history.

Marie was lucky no one in her family was among the hundreds of thousands that died that day. But they did lose their economic lifeline: Her bustling downtown Port-au-Prince restaurant was destroyed.

“After the earthquake, we despaired,” she says. “We didn’t think there was a life for us anymore.”

Marie’s family didn’t have the means to rebuild their home, so they made a shelter out of wood and corrugated metal. Eventually, Marie got some of the help she desperately needed, but it didn’t come in the form of traditional aid. Rather, it was the result of US immigration policy, which helped Marie by helping her sister, Annette, who lives 1,600 miles away in Boston, Massachusetts.

Annette and her immediate family are beneficiaries of Temporary Protected Status, or TPS, a provisional humanitarian relief program that allows immigrants from certain countries to live and work in the US if their home countries have been devastated by war or natural disaster. Congress created the program in 1990, and today some 320,000 nationals of 10 countries are TPS holders. The status offers a reprieve for 18 months at a time, with near-guaranteed extensions. Until now.

The Trump administration has canceled TPS designations for six nationalities, including Haiti, arguing that the countries are now ready to receive their citizens. The move is being challenged in US federal court.

The fate of families like Annette and Marie’s hang in the balance until a final court decision — or until Congress passes legislation granting TPS holders permanent legal status. Both women requested their names not be used in order to protect their family’s identity, as Annette and her children could become undocumented in the US if they lose TPS. The end of TPS would plunge their family into a financial crisis at a time when Haiti’s economy is in shambles, led by a government mired in corruption. All they can do is wait.

A 'lucky break' for Haitians in the US

Annette, 58, lives with her three kids in a working-class, residential area of Boston. On a recent Sunday, she sat down with her family to a classic Haitian meal: fried chicken, black mushroom rice, beans and plantains.

When the earthquake hit, Annette had been living in the US for five years.

“I was shocked,” she says. “My whole family was victim to the earthquake.”

Worse still, there was little she could do to help. Annette and her family were undocumented, which meant they could not fly back to be with family, and their earnings in the US were not enough to help their family in Haiti. Earlier, they had come to the US on tourist visas, which they overstayed. Annette says although life in the US was safer and better, not being able to work legally meant depending on odd babysitting jobs, food pantries and assistance from family back in Haiti.

But just five days after the earthquake, Marie got a break. The Obama administration granted TPS to Haitians. Suddenly, more than 50,000 Haitians in the US without papers could stay and work legally. They joined hundreds of thousands of TPS holders from five other countries: Nepal, Honduras, Sudan, Nicaragua and El Salvador. Most had lived with TPS for close to a decade.

“Definitely before TPS, it was a real struggle, and I still think it is,” says Annette’s 25-year-old daughter, Kettly. “But now myself, my mom, my dad, my brother, we all work, so it definitely got better over time.”

The family hustles. Kettly is a full-time social worker who is getting her master’s in public administration by night. Her brother works at an engineering firm while getting his bachelor’s degree. Her dad has a job with an assisted living facility, and her mom, Annette, cooks at a restaurant.

With TPS, Annette and her family in Boston have been able to send money back to their relatives in Haiti in a form of indirect financial aid.

“They usually call us when they need something,” Annette says, “for school, or the house,” or even if they’ve run out of food.

'One step forward, two steps back'

In Laboule, Haiti, the need for help after the earthquake is still enormous. But Annette and Marie’s family is rebuilding, slowly. Recently, Marie was able to build a small bakery next to her house where she churns out dinner rolls, selling them for 10 cents apiece.

“The ones over there [in the US], they help us in Haiti a lot, in the rebuilding we’re doing,” says Marie’s niece, Louise. She says the house is the best example of what remittances have enabled the family in Laboule to do.

But now even this bit of progress might grind to a halt. In November 2017, then-Acting Homeland Security Secretary Elaine Duke announced TPS for Haitians would end July 2019. A judge has since extended the deadline by six months. When it expires, tens of thousands of Haitians who have been living in the US for at least nine years, many of whom have US-born children, will lose the ability to work in the US legally and will be ordered to leave.

Duke said the decision was based on progress in Haiti, including improvements to stability, safety and quality of life for Haitian citizens. But that statement goes against the US government’s own intelligence. A report issued by US Citizenship and Immigration Services just a month earlier described Haiti’s reconstruction as impeded by negative health, security and economic conditions, as well as other natural disasters. It concluded, “Haiti’s recovery from the 2010 earthquake could be characterized as falling into what one non-governmental organization recently described as ‘the country’s tragic pattern of “one step forward, two steps back.’"

Uncertainty over the future of TPS

Geralde Gabeau, who heads the Immigrant and Family Services Institute in Boston, says the possibility TPS will be canceled is already wreaking havoc for Haitians.

“For the past two years, I would say that TPS has been the issue in the Haitian community,” she says. “So we’ve been on the forefront fighting for TPS to remain, because we cannot afford for families to go back to Haiti, to nothing.”

For Kettly, Annette’s daughter, the uncertainty has been tough. She copes by praying a lot. But the prospect of either living in the US undocumented again or going back to Haiti looms like a dark cloud.

“I definitely think if I stayed here without TPS, life will be really hard because I would not be able to work legally,” she says. That would mean not being able to stay in school.

“Going back to Haiti, I don’t know how life will be,” she says.

Kettly has spent most of her life in Boston. She’s rooted in the US and hasn’t been to Haiti since her family left for the US when she was 11. She’s planning her future in the US, working toward her dream of being a public servant. But if her TPS ends in January, that dream may shatter.

There is, however, a big effort in federal court as well as Congress to block Trump’s plan. Six lawsuits have been filed against the Trump administration over its TPS cancellations for five nationalities. Most claim the cancellations are motivated by racial discrimination rather than country conditions.

In March, Democratic representatives introduced a bill to give TPS holders permanent residency. Although it might pass in the House, it is unlikely to make it through the Republican-controlled Senate.

In Haiti, Trump’s justification for ending TPS is widely rejected. Economist Etzer Emile, who is based in Port-au-Prince, says Haiti has only partially recovered from the 2010 earthquake. Some basic needs were met, and Haitians went to the polls just months after the disaster, but important steps were skipped.

“We were so focused on humanitarian [relief] and election, we forgot the economic recovery,” he says. The consequences of that mistake are being felt today, he says, “because there’s no way we can survive if we don’t create wealth.”

But the money Haitians overseas send home is a bright spot.

“That’s the only thing we can really rely on right now in terms of dollar sources,” Emile says.

According to the latest figures from the Inter-American Development Bank, remittances make up more than a third of Haiti’s GDP — the highest rate in the Americas. The largest portion comes from the US.

“If we didn’t have that, I don’t know what the situation would be,” Emile says with a laugh.

Although TPS holders make up only a fraction of those sending money back to Haiti (US citizens, green card holders, and others also contribute), Emile believes termination of their status would be a blow to the country. Today, the economy is in bad shape, even by Haitian standards. Jobs and wages are meager, a gas shortage is crippling daily life, and inflation is soaring — in the double digits for more than three years, according to Emile. Inflation recently hit a ten-year high of 17% overall, but for food, it’s at 20%.

The cement for Marie’s new house keeps getting more expensive. And the price of flour for her bakery?

The high prices, combined with outrage over a government corruption scandal, have sent people into the streets to protest and riot in recent months. In February, the violence got so bad schools and businesses in the capital area were closed for more than a week.

The country's Minister of Haitians Living Abroad is charged with maintaining strong official ties between Haiti and Haitians overseas and helping the latter support Haiti’s development. Minister Marnatha Irène Ternier believes TPS can have a mitigating effect when it comes to social unrest in Haiti.

“When someone gets up and has no hope at all, it’s normal for them to commit violence,” she says from her office in Port-au-Prince. “When they know that there’s hope they’ll get something from their family [in the US], they might still protest, but in a different way.”

Ternier says the Haitian government has been pushing for permanent US residency for Haitian TPS holders.

For Marie, it would be a blow if her family in the US could no longer work legally or had to come back to Haiti.

“That would be distressing for us, because there isn’t work in Haiti,” she says.

Construction of her home would likely come to a halt, suspending it indefinitely in its skeleton state. That means she would continue to live in a shelter she still calls temporary.

In January it will be 10 years since she lost her home and her business. The same month, Marie’s family in Boston is slated to lose their TPS status — unless courts or Congress step in with a solution.