Far-right extremists in Ukraine brag they have received training from the Canadian Forces: report 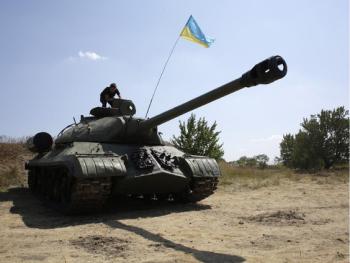 A new report from an American university says far-right extremists in Ukraine’s military have bragged they received training from the Canadian Forces and other NATO nations. PHOTO BY ANATOLII STEPANOV /GETTY

Far-right extremists in Ukraine’s military have bragged they received training from the Canadian Forces and other NATO nations, a new study from an American university has uncovered.

The far-right group has been active since 2018 at the Hetman Petro Sahaidachny National Army Academy or NAA, according to the report from George Washington’s Institute for European, Russian and Eurasian Studies.

The NAA is Ukraine’s premier military education institution and a major hub for western military assistance to the country, including from Canada.

Centuria members acknowledged on social media they have received training from the Canadian military and have participated in military exercises with Canada. In May, Centuria organizers boasted to their followers that its members currently served as officers in Ukraine’s military and “have succeeded in establishing cooperation with foreign colleagues from such countries as France, the United Kingdom, Canada, the USA, German and Poland,” according to the institute’s report.

“The Ukrainian military’s failure to check Centuria activities suggests a level of tolerance on its part for the apparent proliferation of far-right ideology and influence within the Armed Forces of Ukraine,” the study warned.

One member of the group has received officer training in the United Kingdom’s Royal Military Academy Sandhurst, graduating in late 2020. Another attended the German Army Officer’s Academy in Dresden in 2019.

In the summer of 2019, Centuria came out in support of a rally held by Ukrainian far-right groups to counter the LGBTQ “Kyiv Pride” event. Centuria released a statement that it supported “right patriots, nationalists, conservatives and Christians currently defending the streets of Kyiv from perverts from the LGBT movement and their left-liberal sympathizers.”

The NAA denied to the university researchers that Centuria operated within the academy and noted it had no tolerance for extremism. But the report has a number of photos of NAA cadets giving Nazi salutes and promoting far-right material. One of the NAA cadets was a firearms instructor for a far-right group that the United Jewish Community of Ukraine accused in 2021 of spreading anti-Semitic propaganda.

Canadian Forces spokeswoman Lt.-Cmdr. Julie McDonald said it was up to Ukraine to vet its own security forces. But, if Canadian military personnel saw first-hand evidence of extremist views, they could refuse to train those soldiers, she added. The Canadian Forces, however, does not proactively examine the backgrounds of those they train or look for signs of support for far-right causes.

“The Department of National Defence and the Canadian Armed Forces are strongly opposed to the glorification of Nazism and all forms of racism, racial discrimination, xenophobia, intolerance and extremism,” McDonald added.

Ukraine’s Ministry of Defence told university researchers that it did not screen those entering the military or military cadets for extremist views and ties. It stated concerns about Centuria were baseless and that such an organization was “fake.”

Bernie Farber, head of the Canadian Anti-Hate Network, said it was not good enough for the Canadian military to take a passive approach in regard to far-right extremism when it came to its training of foreign soldiers. “Clearly Canada has a responsibility when it comes to who it trains,” Farber said. “It’s not good enough just to leave it to the Ukrainians. The end result is the fact that Canadian troops may have trained Ukrainian Neo-Nazis.”

Concerns about such training have been circulating since 2015, when it was first decided to send Canadian troops to Ukraine. In April of that year, then-defence minister Jason Kenney acknowledged that Canadian military leaders discussed how to avoid training extremists. That was done initially by stipulating that only units of the Ukrainian National Guard and army be trained as opposed to some of the ad hoc militias that had sprung up in the country at the time.

But MP Jack Harris, then the NDP defence critic, warned that far-right groups were integrating themselves into the military, making it difficult to weed out extremists.

Centuria also has ties to the Azov movement. In 2018, the U.S. Congress banned the use of U.S. funds to provide arms, training and other assistance to the Azov Battalion because of its links to the far right and Neo Nazis.