In food-insecure Haiti, street vendors play a central role in feeding the capital 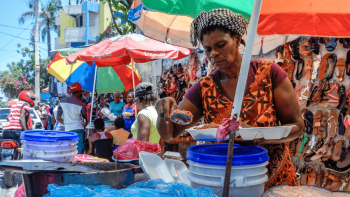 In the wake of price hikes that led to widespread violence here earlier this month, the International Monetary Fund is continuing to insist that the Haitian government limit food subsidies. In a country that struggles mightily with hunger and malnourishment, the unrest took a toll on a unique tradition that Haitians have developed to feed the capital’s inhabitants: the manje kwit, or street-food sellers.

Many Haitians turn to the informal street restaurants that line many of the city’s major streets. The manje kwit cook from small houses made of sheet metal draped with sheets. Here, these ordinary citizens act as chefs and set up near bus stations, churches or on the edges of local markets, to serve local people at affordable prices.

But in early July, the capital was paralyzed for five days, forcing these little-known lifelines to temporarily close.

Sit-down restaurants were also closed during the protests earlier this month, but they often remain empty even when the city is calm. The average cost of a plate of food in basic Creole restaurants here is 250 Haitian gourdes ($4). Most Haitians live on less than $2 a day, however, so the price of a meal in a restaurant is prohibitive.

Hunger remains a major issue across the island nation, where the USAID estimates that 40 percent of households are undernourished and where 30 percent of children suffer chronic malnutrition. While agriculture is a primary industry here, the country still lacks the ability to produce enough of its major staple — rice — to feed its population.

The food sellers say they take pride in serving Haitian staples to citizens according to their ability to pay.

“We serve teachers, students, porters and shoe polishers,” says Jocelyne Jean Baptiste, 30, who has served Haitian rice and beans in a street restaurant for the last seven years. “I feel useful to my community, while allowing them to ease their hunger at a price that works for everyone.”

Jean Baptiste sells her dishes for 75 gourdes ($1) or less, as do her fellow street cooks.

“My business still allows me to manage my life, my children,” she says.

But during the protests, the manje kwit weren’t able to operate, causing widespread hunger for their customers and financial strain for the chef, says Cécilia Alfred, 42, has been a manje kwit for six years.

“I could not sell the food I had prepared, because we could not stay in the streets,” she says. “So, I had to eat it with my children, and the rest I gave free to neighbors. That is how I lost my investment.”

John, one of her frequent clients who declined to give his last name, says food was scarce without Alfred’s low-cost options.

“During the five days of protest, I struggled to find food to eat, because I could not leave my house,” he says, adding that Delmas, the area of the capital where he usually finds Alfred, was “in the chaos.”

Since the protests stopped, manje kwit have re-emerged, showing up at nearly every intersection, market or gathering place in the capital. Street restaurants re-emerge to offer fare to Haitians at reasonable prices. Rice, peas, vegetables and chicken dishes are again satisfying thousands of people on the streets daily.

“These food vendors contribute to the daily lives of every Haitian,” says Fredna Clemont, a regular customer.

As officials here negotiate with the IMF on food subsidies, street restaurants are on the front lines, trying to provide their fellow citizens with nutritious, affordable meals.

“It is always a pleasure to see your customers trusting you with their bellies,” Alfred says.

Sylvestre Ndahayo translated this article from French. Oxane Sylvestre of GPJ reported from Port-au-Prince, Haiti. A version of this story originally appeared on Global Press Journal.