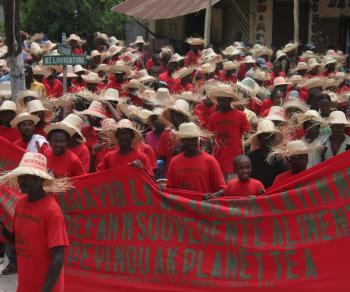 "So That Everyone Can Eat, Produce It Here:" Food Sovereignty and Land Reform in Haiti

Doudou Pierre is on the coordinating committee of the National Haitian Network for Food Sovereignty and Food Security (RENHASSA). He is also a member of the International Coordinating Committee for Food Sovereignty, organized by Vía Campesina, the worldwide coalition of small farmer organizations. In addition, he is a member of the National Peasant Movement of the Papay Congress and the Peasant Movement for Acul du Nord. This week he will be heading North to the U.S. Social Forum in Detroit.

In the June 4, 2010, article, “Groups Around the U.S. Join Haitian Farmers In Protesting ‘Donation’ of Monsanto Seeds,” Doudou commented on the damage that Monsanto and other agricultural corporations could wreak on Haitian agriculture. Here, he speaks about how government investment in small farmers and in food sovereignty could impact Haiti’s future.

We’re putting together a national network, RENHASSA, to show what our alternatives are today. The whole peasant sector is coming together to tell everyone about the policies we want. Our mission is to advocate for Haiti to be sovereign with its food and to promote national production.

We’re mobilizing politically for the policies we want. We publish articles and do community radio programs about our positions. We’re also doing media campaigns and having meetings to educate people about growing for local and family consumption as much as possible, instead of buying food from other countries. People are starting to recognize and change their habits to just buy local goods.

First, we have to decentralize the Republic of Port-au-Prince, which got created during the U.S. occupation of 1915 to 1934. Services now exist only in the capital. People died during the earthquake for an identity card or a copy of a transcript, because they had to come to Port-au-Prince to get them. Services must be in all departments [akin to states]. All the people who are in the countryside have to have the resources to stay there.

Second, and this is the essential element, is the relaunching of agriculture in this country. We were almost self-sufficient until the 1980s. We have to fight and pressure the state, so it prioritizes agriculture. Otherwise, we’ll always have to depend on multinationals and non-governmental organizations for our food. The government has to take responsibility for that.

We’re not in favor just of food security, which is a neoliberal idea. With food security, as long as you eat, it’s good. But, we only produce 43% of our food; 57% is imported.  We need food sovereignty, which means that so that everyone can eat, we produce it here at home. We could produce here at least 80% of what we eat.

You can’t speak of food sovereignty without speaking of ecological, family agriculture. We need that and indigenous seeds. We need for peasants to have their own land.

We have threats from multinationals, mainly to grow jatropha [whose seeds produce oil which can be used for biofuel]. The Jatropha Foundation is lobbying hard to start growing. Jatropha puts us at risk, because we don’t have enough land to be able to divert some toward biofuel. Haiti is only 27,760 square kilometers. Their plan would have us produce even less food and would force peasants to be expropriated. Plus, they’d be using a lot of water, which could create an ecological disaster. It’s a death plan against the peasants.

We’re mobilizing people against growing biofuel. Last October, when the government was considering giving contracts to grow jatropha, we held a big march and sit-in; we gave a petition to parliament. We said, “No, Haiti’s land is for growing food.” We met with the minister of agriculture and the World Food Program.

Besides food sovereignty, our other main priority is integrated land reform. We can’t talk about food sovereignty, if people don’t have land.  They have to have land to be able to market; that’s the only way we can get away from food aid. Our plan is to take the land from the big landowners and give it to the peasants to work. And the food has to be organic, without any chemical fertilizers which destroy the land.  We don’t use anything [unnatural in our cultivation process].

Now, even if people have a little handkerchief of land, they don’t have the technical support to let them plant.  The state has to give us credit and technical support and help us store and manage water. Préval said he was doing agrarian reform in his first term. We called it agrarian demagoguery. He just gave out a few parcels, divided into very small plots, to his political clientele and political party, even to people who weren’t in Haiti.  And, his government didn’t offer any technical support.

That’s not what we need. The agrarian reform we want is for those who work the land to have the right to that land, with all its infrastructure.

The cultural reality of Haiti is that peasants each want their own little piece of land to produce their own food. But, there has to be cooperative land. Peasant organizations can create collectives to produce food for export and make money, but for that there has to be integrated land reform with technical support, credit, water, everything. We must have government support.

Right now, the government doesn’t even exist for us. It’s saying to the international community, “Here’s our country.  Come take it.” They’ve given away the whole country, and now we have [U.N. Special Envoy Bill] Clinton, who is a tool of the big multinationals. So, on top of all our other fights, we have to fight to change the state.