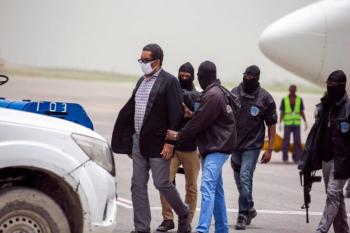 Emmanuel “Toto” Constant, in the white mask, being taken into custody by Haitian police upon his arrival in Haiti on an ICE flight on Jun. 23.

After receiving de facto political asylum in the U.S. 26 years ago, former Haitian paramilitary chieftain Emmanuel “Toto” Constant was finally deported back to Haiti on Jun. 23. But his return to his homeland couldn’t come at a worse time.

His right-wing political allies are in power. President Jovenel Moïse of the Haitian Bald Headed Party (PHTK) currently rules Haiti by decree. Parliament has been disbanded, and Haiti’s judges are on strike.

Constant was convicted in absentia in 2000 of crimes against humanity for his role in a 1994 massacre in Raboteau, a suburb of the city of Gonaïves. In the three years before he fled, Constant headed the Revolutionary Front for the Advancement and Progress of Haiti, known simply as FRAPH, an acronym which sounds like “punch” in Kreyòl. Human rights investigators have found that FRAPH sowed terror and death across Haiti during the 1991-1994 coup d’état against President Jean-Bertrand Aristide, killing some 3,000 Haitians and wounding or maiming many more.

Under Haitian law, Constant now has the right to a new trial. The problem is that “there really is no difference between the PHTK and the FRAPH,” said Mario Joseph, one of the lead lawyers in the 2000 Raboteau massacre trial, in which Constant and several other 1991 coup leaders were convicted in absentia. “Both organizations have the same modus operandi of violence, corruption, terror, and banditry.”

Constant had served 12 of a 37-year prison sentence in New York State after being convicted of mortgage fraud and grand larceny in 2008. He had been a real estate broker in New York’s Queens and Nassau counties following his 1994 flight to the U.S..

As part of its anti-immigrant agenda, the Trump administration is deporting foreign nationals being held in U.S. jails with felony convictions. U.S. Immigration and Customs Enforcement (ICE) had scheduled to deport Constant back in May but didn’t, without explanation. This time, his deportation went through.

Constant was the first deportee of 24 who stepped off Tuesday’s ICE flight from Louisiana. The plane landed in Port-au-Prince at 12:30 p.m. He was immediately arrested and handcuffed by Haitian police and taken to a jail cell at the Central Direction of the Judicial Police (DCPJ), a police station located right next to the capital’s airport.

Constant’s Haitian lawyer, Ronaldo Saint-Louis, told reporters that his client was arrested and being held illegally. “We are going to fight for his right to be released,” Saint-Louis said.

“This is an important test for the Haitian justice system,” international human rights lawyer William G. O’Neill told the Miami Herald. He worked closely with the lawyers of the International Lawyers Office (BAI), which Mario Joseph heads, during the 2000 Raboteau massacre trial. “So I hope that, if there is a new trial, the Haitian people will have their day in court and secure justice and establish the truth of what happened in that terrible time.”

But Joseph was a little less sanguine.

“Although the government arrested Toto Constant as he got off plane, we expect to have a very difficult challenge to actually bring him to justice,” he told Haiti Liberté. “Just look at the case of Jean-Robert Gabriel, who was, in the 1990s, the Secretary of the General Staff for the Haitian Armed Forces (FADH) and was convicted in absentia – just like Toto Constant – at the Raboteau trial. Today, Gabriel is in the high command of the so-called reconstituted Haitian Army established by Jovenel Moïse and the PHTK. This just shows that under the current regime, impunity is alive and well.”

“WE EXPECT TO HAVE A VERY DIFFICULT CHALLENGE TO ACTUALLY BRING HIM TO JUSTICE,” SAID HUMAN RIGHTS LAWYER MARIO JOSEPH.

Noting that Washington is heavily supporting Jovenel’s government, “it will be hard for the U.S. to say that there is democracy in Haiti if the PHTK government doesn’t strongly pursue the crimes against humanity for which Toto was already convicted in absentia,” Joseph said.

FRAPH’s second-in-command, Louis-Jodel Chamblain, was also convicted in absentia for involvement in the Raboteau massacre, as well as for the execution-style murder of Antoine Izméry, a prominent Haitian businessman who openly supported Aristide during the coup. Gunmen dragged Izméry from a church on Sep. 11, 1993 and shot him in the head in the middle of a street.

However, after the second coup against Aristide on Feb. 29, 2004, Chamblain (who was a leader of a small band of putschist armed “rebels”) petitioned for a retrial from the de facto government. In a lightning-fast midnight trial, Chamblain was acquitted and released from jail in August 2005. He has walked free in Haiti ever since.

A similar kangaroo-court could free Constant, but Joseph thinks there is a fighting chance. He and other lawyers at the BAI are getting ready for the court battles ahead.

“Given the legal rulings over the past 20 years, Toto cannot hope to be cleared by Haiti’s Supreme Court,” Joseph said. “The only option he has is to go before a criminal court where the victims of Raboteau will confront him and to try to defend himself.”