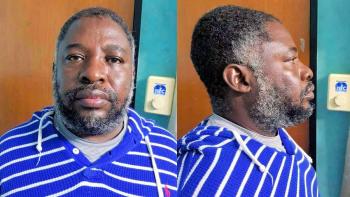 Former senator John Joël Joseph after his arrest in Jamaica. He is considered to be a central figure in the Jovenel Moïse murder case.

After six months as a fugitive, John Joël Joseph, a former senator of the Lavalas Family Political Organization for Haiti’s West Department, was arrested this past weekend in Jamaica on charges of illegally entering the country and being a conspirator in the Jul. 7, 2021 assassination of Haitian President Jovenel Moïse.

According to the Jamaica Observer, Joseph paid US$12,000 to hire a boat to flee Haiti to Jamaica with his wife and two children in December. Since then, they had been living in the small rural hamlet of Warminster, St. Elizabeth, about 72 miles west of Kingston.

Joseph had been paying off local residents to assist in keeping his identity and presence in town a secret, according to the Observer, and even offered the Jamaican cops who came to arrest him at 2 a.m. on Sat., Jan. 15 a $2 million bribe to let him escape.

“The police are following other lines of enquiries, as it is believed that Joseph, who has collected large sums of cash since he has been on the island, is being supported by well-connected individuals who bankrolled the president’s assassination,” the Observer reported.

Following the money is of course the best way to trace who funded and masterminded the murder of Jovenel Moïse. In this respect, the Jan. 7 arrest of Haitian importer Rodolphe Jaar in the Dominican Republic is particularly important because he was the main fundraiser for the operation, a well-placed anonymous source told Haïti Liberté.

Meanwhile, on Jan. 13, the U.S. Senate unanimously voted to join the House of Representatives in ordering the U.S. State Department to issue a report within 180 days that would provide a “detailed description” of the circumstances surrounding Moise’s killing, Yahoo News reported. In July, FBI agents were deployed to help investigate the murder, and four continue to assist Haitian police. To date, the agency has made public no findings.

Both Jaar and Mario Antonio Palacios Palacios, one of the 26 Colombian mercenaries who assaulted Moïse’s residence and killed him, are in U.S. custody in Miami. Palacios has been “charged with conspiracy to commit murder or kidnapping outside the United States and providing material support resulting in death, knowing or intending that such material support would be used to prepare for or carry out the conspiracy to kill or kidnap,” according to the U.S. Justice Department. It is expected that Joseph will be extradited to the U.S. and, along with Jaar, similarly indicted.

In essence, the U.S. has begun to take over the prosecution of the suspects in Jovenel Moïse’s assassination, a development that alarms some Haitian lawyers like Newton Saint-Juste.

The prominent human rights attorney suspects that several narco-traffickers from Haiti’s bourgeoisie organized and funded the assassination and that some U.S. government agencies may have had some involvement as well.

“The U.S. may seek to create a diversion to cloak their possible role in or foreknowledge of the murder plot,” Saint-Juste told Haïti Liberté.

In a Jan. 17 press conference, Saint-Juste pointed to some $700,000 which is known, through tax documents and legal proceedings, to have been paid from Haiti to the Florida-based company, CTU, which hired the Colombian mercenaries.

“That money needs to be traced and may be the tip of the iceberg,” Saint-Juste told Haiti Liberté. CTU’s owner “Antonio Intriago visited Haiti and may have taken back even more money in cash,” he continued. “All of this needs to be investigated.”