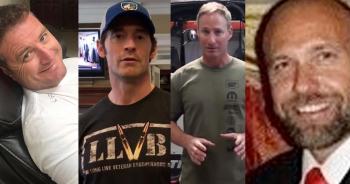 The former Navy SEAL among a group of eight men arrested earlier this week in Port-au-Prince on weapons charges says he was providing security work "for people who are directly connected to the current President" of Haiti.

"We were being used as pawns in a public fight between him and the current Prime Minister of Haiti," said Chris Osman, 44, in a now-deleted post on Instagram Friday. "We were not released we were in fact rescued."

Osman was one of five Americans, two Serbs, and one Haitian who were stopped at a Port-au-Prince police checkpoint on Sunday while riding in two vehicles without license plates, according to police. When questioned, police said the men — who were carrying AR-15 rifles, pistols, various knives, satellite phones, and other tactical gear — claimed they were on a "government mission" before being taken into custody.

Three others in the group were Vlade Jankvic, 41, and Danilo Bajagic, 37, both Serbian nationals; and Michael Estera, 39, a Haitian citizen.

Seven of the eight men were released from police custody and put on a plane back to the U.S. on Wednesday, where they were greeted by law enforcement officers on the ground in Miami (Estera was not allowed to leave Haiti).

A State Department spokesperson said their return was "coordinated with Haitian authorities" but declined to comment further.

"Sometimes life is stranger than fiction and filled with crazy adventures. I am alive and back home. We all are," Osman said in the post. "It's now known that I do security work and have done it for years. My days of doing any out of the U.S. is officially over because I'm plastered all over media around the world."

Osman went on to say the people of Haiti were "really good to us" and thanked the U.S. government, State Department, U.S. Embassy in Haiti, and others who "stepped in to save us."

The U.S. Embassy in Haiti did not respond to emailed questions from Task & Purpose.

The men being escorted off the plane by law enforcement in Miami was captured by Carel Pedre, a Haitian media personality, who was on American Airlines flight 1059 and posted a video of the incident on Twitter.

"The pilot said government officials were coming in," Pedre told Task & Purpose. "They had navy blue uniforms with what looked like the Homeland Security badge on their shoulders."

But which law enforcement agency actually took them off the plane remains a mystery. Task & Purpose contacted The City of Miami Police Department, Miami-Dade Police Department, the FBI, TSA, and the U.S. Marshal's Service, and all denied they had any involvement. A spokesperson for Customs and Border Patrol did not respond.

Federal sources told The Miami Herald the men would not be charged.

A spokeswoman for the U.S. Attorney's office for the Southern District of Florida declined to comment.