France 24 headline: Washington is Haiti President's only support for staying in power 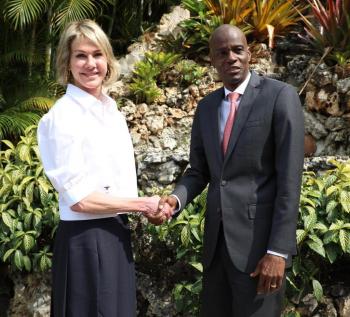 A French news agency has reported, as all in Haiti have known for some time, that the only support keeping the deeply embattled Haitian President Jovenel Moïse in power is coming from Washington, D.C..

"Crisis in Haiti: 'The maintenance of Jovenel Moïse in power only has the support of Washington'" is an article that was published by France 24 on Thursday, November 21.

The European Union bailed on Jovenel Moïse back in August, and this was in sensational fashion. After replacing its ambassador and having her introduced at the National Palace, a purported overview of the ambassador's impression of the Haitian president, that was sent by diplomatic cable to Belgium reportedly, declared Jovenel Moïse appearing as someone suffering from some form of phsychosis and psychological damage.

Every sector of Haitian political, professional, religious and civil society, has called for the resignation of Mr. Moïse. He has been formally charged by Haiti's Supreme Court of Auditors and Administrative Disputes (CSCCA) for taking part in a massive money laundering, fraud and embezzlement operation of a $4.6 billion development fund.

Human rights organizations have filed reports charging he and members of his administration responsible for massacres of Haitian citizens in several of the country's most underpriviledged neighborhoods. On November 13, the National Palace Chief of Staff, Fritz Jean Louis, was shot 5 times while trying to negotiate financing and arms for a street gang. He is recovering in a Dominican hospital.

Furthermore, Amnesty International has reported finding evidence of systematic repression of peaceful protests through aggressive and violent means by the police. The Haitian National Police (PNH) are wholly funded and trained by the U.S..

Ambassador Craft failed to get key members of the Haitian opposition into a meeting. Of those who met with her, no movement towards talks with Jovenel Moïse could be found. Difficult still, Haitians protested against Ambassador Craft's presence throughout Haiti. And reports that PNH officers brutalized and even broke the teeth of a group who were setting up a sit-in protest adjacent the Toussaint Louverture International Airport was not attractive.