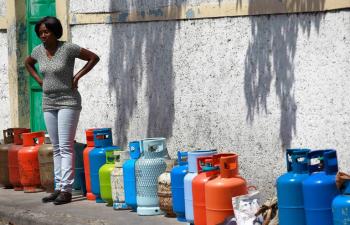 A woman stands among empty propane tanks used to mark the owners’ places in line. During violent protests that shut down the county for 10 days in February 2019, Port-au-Prince residents were forced to endure long lines for fuel, as well as water throughout the capital city.

Haiti´s long-suffering population has faced an extra burden for more than a week: closed service stations and lines of motorists hoping to buy even a few drops of petrol during a fuel shortage that´s getting worse.

From the capital Port-au-Prince to smaller towns around the Caribbean country, car drivers and motorcyclists wait in line at the few gas stations still selling fuel, albeit at rising prices. Haiti is one of the world´s poorest countries which has faced months of political turmoil.

"I have been in this never-ending line for hours," a driver of one of Port-au-Prince´s ubiquitous motorbike taxis complained. "When the service stations aren´t closed, those that are still selling gasoline are doing it drop by drop."

The president of the National Association of Petroleum Product Distributors, David Turnier, confirmed to AFP that "there is a scarcity of petroleum products in the local market." A gallon (3.8 litres) of gasoline which normally sells for about 224 gourdes ($2.33) has more than doubled to 500 gourdes ($5.20) in some areas.

A source close to a prominent petroleum product importing company told AFP there is a cash flow problem. "The Haitian state does not have the economic means to pay its debts to the

companies that import gasoline to the country," the source said on the condition of anonymity.

"And for us, when we don´t have money, we can´t place orders." Venezuela´s PetroCaribe program, plagued by allegations of corruption but which had allowed Haiti to buy petroleum products more cheaply and on credit, has been suspended for more than a year because of deteriorating relations between Venezuela and the United States.

Hurricane Dorian, passing through the Caribbean this week, also delayed petroleum deliveries. In May, judges of the High Court of Auditors said in a voluminous report that President Jovenel Moise was at the center of an "embezzlement scheme" that had siphoned off Venezuelan aid money intended for road repairs.

At least seven Haitians died during protests in February that led to the fall of the government. Moise in July named Fritz-William Michel as prime minister, his fourth head of government in two and a half years. Three-fifths of Haiti´s population of nearly 11 million live below the poverty line of $2 a day.