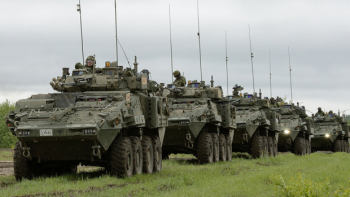 A variant of the Light Armoured Vehicles, similar to the ones ordered by the Canadian Armed Forces, sits inside the General Dynamics Land Systems-Canada factory in London, Ont., Friday, Aug. 16, 2019. THE CANADIAN PRESS/Geoff Robins

Sajjan said in a statement, "I am pleased to be moving forward with the strengthening of our fleet of armoured combat support vehicles as committed to in our defence policy, Strong, Secure, Engaged, while at the same time supporting Canadian jobs and innovation through our partnership with GDLS-C.”

The cost of the project, announced on Friday, is estimated at up to $3 billion, with a repayable loan worth up to $650 million. That cost includes new infrastructure to house and maintain the vehicles.

However, no contract has yet been signed, and full details around the price and timeline have yet to be determined.

As part of the deal, General Dynamics is expected to reinvest an amount equal to the contract's value into the economy.

Sajjan was joined by London Mayor Ed Holder and local MPs for the announcement.

General Dynamics has been at the centre of a debate around whether or not Canada should cancel the controversial $15-billion Saudi arms deal.

General Dynamics has previously said that cancelling the contract would also hurt its workforce.

When asked about whether the Saudi deal could still be cancelled, Sajjan said, "It is currently under review."

Meanwhile, opposition parties are criticizing the announcement as a simple distraction tactic.

In a statement, James Bezan, defence critic for the Conservatives, said, "The Liberals are now desperately using the needs of our military to distract from Justin Trudeau’s SNC-Lavalin corruption scandal right before an election"

A statement released Friday reads in part, “If the Liberals truly cared about workers in London they would have made this announcement years ago and well before many already received layoff notices...Workers, their families and our armed forces deserves better."

--With files from CTV London's Justin Zadorsky and Daryl Newcombe