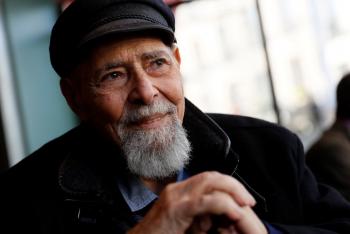 Mr. Bloncourt in Paris in 2016. He was born in Haiti and grew up there but spent most of his life in France.CreditThomas Samson/Agence France-Presse — Getty Images

Gérald Bloncourt, who after being expelled from Haiti for his role in antigovernment protests in 1946 went to Paris and turned his zeal for social justice into photography that captured the humanity of immigrants and factory workers, died on Oct. 29 in Paris. He was 91.

His wife, Isabelle Bloncourt-Repiton, said the cause was complications of melanoma.

Mr. Bloncourt’s passion for chronicling the everyday dignity of exploited peoples found a particular focus in Portuguese émigrés who had fled authoritarian rule and conscription to seek jobs in construction and factories in postwar France. For several years, he followed them, on foot and by train, from their villages to makeshift slums outside Paris, where their odysseys ended in renewed hardship in a foreign land.

“I wanted to use my photos as a weapon in hopes to change the world,” he said in Paris in 2013 at an exhibition of his photographs at the Palais de la Porte Dorée.

An immigrant following other immigrants, Mr. Bloncourt showed people in the Pyrenees on their journeys to France and people in the ankle-deep mud of shantytowns in suburbs of Paris like Champigny-sur-Marne. Children stare at his camera from behind chicken wire in front of their shacks. A toddler sleeps in a train car leaving Lisbon. One man gives another a haircut on a rocky road in Champigny.

The culmination of Mr. Bloncourt’s Portuguese work came in 1974, during the so-called Carnation Revolution, when the country’s fascist regime was ousted in a nearly bloodless military coup that soon led to democratic rule.

On his blog, Mr. Bloncourt recalled the thrill of arriving in Lisbonwithin days of the ouster of Prime Minister Marcelo Caetano: “Everything was to photograph! The laughter, the tears, the flowers with guns, the meetings between prisoners freshly released!”

For preserving the history of the Portuguese immigrants, Mr. Bloncourt received the Commander of the Order of Prince Henry in 2016 from the president of Portugal in a ceremony held in Champigny.

Mr. Bloncourt was born on Nov. 4, 1926, in Bainet, Haiti, and as a child moved with his family to the southern port town of Jacmel after a devastating hurricane. His father, Yves, who was from Guadeloupe, was a coffee and vegetable farmer who later became a top government sports official in Haiti. His mother, Noémie Calleri, whose parents were Italian, grew up in the south of France, taught in Paris and ran schools in Jacmel and Port-au-Prince, the capital.

He was born during the 19-year United States occupation of Haiti, which was ordered by President Woodrow Wilson in 1915 in response to unrest surrounding the assassination of a Haitian president. Mr. Bloncourt recalled the occupation with loathing. The Americans, he wrote on his blog, “did not hide their contempt for Haitians, regardless of social category.”

Gérald began painting as a youngster, and in the mid-1940s, when he was only 17, he was one of several founders of the Haiti Art Center, which provided instruction and exhibition space to a broad range of local artists.

“This was the spark that set fire to the powder and caused the explosion of the great painters,” he told Kreyolicious, a website dedicated to Haitian culture, in 2012.

But his life veered off sharply in 1945. A devoted Marxist, he briefly attended medical school (not with an aspiration to be a doctor but to study anatomy for his art); with fellow students and colleagues, he started a newspaper, La Ruche, with the goal of overthrowing President Élie Lescot.

The government shut down the paper after three issues, and protesters clashed with the police during demonstrations in Port-au-Prince. After the protests were joined by teachers, shopkeepers and government workers, Mr. Lescot stepped down, and a military junta took control.

For his role in leading the demonstrations, Mr. Bloncourt was expelled and put on a plane to Santo Domingo, the capital of the Dominican Republic. He subsequently went to French-controlled Martinique and, through friends, went on to start a new life in France.

In Paris, he returned to painting and took courses that would let him teach art. But a position at a photography boutique led to a job as photographer at L’Humanité, a Communist Party newspaper.

He subsequently worked at several French newspapers, which allowed him to witness events as diverse as a strike by Renault autoworkers in 1968 in Boulogne-Billancourt, a suburb of Paris, and the Western Sahara war between the Polisario Front and Moroccan troops in the 1970s.

Even as his reputation grew in Paris, he yearned for brighter times in Haiti. He returned for the first time in 1986, after Jean-Claude Duvalier, the dictator who had succeeded his father, François, went into exile in France. Outraged by Duvalier’s record of brutality and oppression, Mr. Bloncourt in 1998 was a founder of a group that tried, unsuccessfully, to persuade the French authorities to send him back to Haiti to stand trial.

“It is our duty, in memory of the 60,000 victims of his and his father’s regimes, to ensure that Jean-Claude Duvalier is judged,” he said.

In addition to his wife, Mr. Bloncourt is survived by his daughters, Ludmilla Bloncourt, Sandra Millé and Morgane Itshak-Levy Bloncourt; a son, Gérald; five grandchildren; and several great-grandchildren. Two brothers died before him: Tony, who fought for the French Resistance and was executed by the Germans in 1942, and Claude, who was a surgeon.

One of the most indelible images in Mr. Bloncourt’s Portuguese portfolio is of a little girl holding a doll at a muddy shantytown in St. Denis, a northern suburb of Paris, in 1969. The girl, Maria da Conçeicão Tina Melhorado, first saw the picture in 2010 in an advertisement for an art exhibition in Portugal. Seeing it left her ashamed at the conditions she had to live in.

But when her son said it made him proud that the little girl was his mother, her feelings changed. “That’s when I realized how important it is for our story to be told,” she told The Times in 2013, “and when any feelings of shame I had turned to pride.”

A version of this article appears in print on Nov. 13, 2018, on Page A28 of the New York edition with the headline: Gérald Bloncourt, 91, Dies; Captured Migrants’ Struggle.